American Crucifixion:
The Murder of Joseph Smith and the Fate of the Mormon Church

Alex Beam is a columnist for the Boston Globe and the International Herald Tribune and the author of Gracefully Insane: The Rise and Fall of America’s Premier Mental Hospital (2001) and A Great Idea at the Time: The Rise, Fall, and Curious Afterlife of the Great Books (2008). He has now taken a substantial turn and ventured into the realm of mid-nineteenth century Mormon history with his book American Crucifixion: The Murder of Joseph Smith and the Fate of the Mormon Church.

American Crucifixion is divided into fourteen chapters, which are set primarily in the years 1839–46, when Joseph Smith and the main body of Latter-day Saints occupied Nauvoo, Hancock County, in western Illinois. As the subtitle suggests, the purpose of the book is to explain the reasons, in the context of time and place, behind the violent killing of Joseph and his older brother Hyrum on June 27, 1844. Beam’s narrative does not provide a lengthy examination of Smith’s life, which was obviously never his intention, so to provide historical background he integrates flashbacks and vignettes to provide glimpses of the Mormon leader’s earlier years in New England, New York, Ohio, and Missouri.

In the introductory chapter, Beam justifies his writing of the book: “Latter-day Saint historians and their Gentile colleagues have pored over many signal events in Mormon history, such as Joseph’s First Vision of God, his purported discovery of the Book of Mormon, and the Saints’ grueling trek to Utah. But most historians have ignored Joseph’s death” (xiv). However, a veritable plethora of reputable scholarly books, book chapters, and professional journal articles about Joseph Smith’s martyrdom and its aftermath have been produced by distinguished LDS and non-LDS scholars from a variety of disciplines. In fact, Joseph Smith’s martyrdom is one of the most frequently discussed topics in Mormon historiography.

In a June 2014 interview with KUER radio host Doug Fabrizio, Beam explained that until just two years ago he knew nothing about Joseph Smith. Apparently, in his efforts to write the book, Beam had to take a self-styled crash course on Joseph Smith. This leads to the question of how credible Beam’s treatment of the Mormon leader could be, especially in light of the fact that until recently he had no knowledge of the beginnings of Mormonism, nor had he ever previously researched or published any type of scholarly study on the subject of Mormonism or the church Joseph Smith founded. A weak track record often equates to weak scholarship, and in regard to Beam’s version of Mormon history, such weakness is found in many portions of the book. Given his short learning curve, Beam relies heavily on information previously published in books and journal articles to compose his own storyline. It is evident that many of the original or primary source quotations he uses are actually taken or cited from secondary sources.

Portions of Beam’s work have merit. The chapters devoted to chronicling the events leading to the Prophet’s arrest, the assault on Carthage Jail, the burial of Joseph and Hyrum, the Mormon succession crisis, and the May 1845 trial of the alleged assassins are noteworthy, but they are not exceptional (chapters 8–13). In these pages, Beam tends to rely more on the facts and speculate less, thereby giving more credibility to his history. That said, readers will be better informed and more enlightened by reading the comparable chapters (13–15) in Glen M. Leonard, Nauvoo: A Place of Peace, a People of Promise (2002) and the award-winning book by Dallin H. Oaks and Marvin S. Hill, Carthage Conspiracy: The Trial of the Accused Assassins of Joseph Smith (1975).

A major focus of Beam’s book is on Joseph Smith’s practice of polygamy (chapter 5). Not surprisingly, his treatment of plural marriage aligns closely with that of Fawn M. Brodie’s psychoanalytic history No Man Knows My History: The Life of Joseph Smith, the Mormon Prophet (1945) and, more recently, George D. Smith’s Nauvoo Polygamy: “. . . but we called it Celestial Marriage” (2008). Both of those works give distorted interpretations of the practice, straying far from available source materials. Beam perpetuates these imaginative accounts by essentially reiterating Brodie and Smith. Beam’s analysis of Joseph Smith’s practice of plural marriage is also partially reflected in information provided in Todd B. Compton’s In Sacred Loneliness: The Plural Wives of Joseph Smith (2001), albeit this work is a more reliable analysis. However, the most definitive and comprehensive study on plural marriage—and in my opinion, the most balanced and objective—is Brian C. Hales’s three-volume work Joseph Smith’s Polygamy: History and Theology (2013), a work that Beam does not acknowledge. Hales’s analysis reverses many of the stereotypical interpretations, and Beam’s work would have benefitted by it.

The book’s system of source citation is problematic. Instead of using the format prescribed in The Chicago Manual of Style, quotation information is included in the notes section at the end of the book, where citations appear in abbreviated fashion by page location and are often incomplete. He also misuses quotations, at times not providing sources, thereby creating the impression that a particular individual is being quoted when in reality the quotation is from a secondary source.

Beam is a skillful writer and wordsmith, and his journalistic style is clearly evident in the text. The narrative flows well and is often colorful and creative. But the craft of writing does not make up for what at times is unbalanced and otherwise shaky history. More often than not, Beam presents a one-sided, unsympathetic, and disparaging view of Joseph Smith, which leaves readers with the impression that the Mormon prophet was a delusional, pompous, dictatorial megalomaniac. Beam portrays Joseph as a womanizer, a fugitive from justice, a deceiver, and a spiritual hypocrite—in short, a religious charlatan. Perhaps that is exactly the impression Beam intended to convey, but is that the real Joseph Smith? Many historians have argued otherwise.

But even more egregious is Beam’s frequent misrepresentation of Joseph Smith’s spiritual claims and teachings—clear evidence of the author’s limited understanding of Smith’s theology (particularly in connection with polygamy and eternal marriage). Also disturbing are statements by the author that reflect more innuendo than fact. Beam notes, for example, that the law of consecration observed for a short time by the Latter-day Saints in Ohio and Missouri was “pure communism” (20), but he offers no explanation about what constituted the practice or how it was intended to be lived. Concerning “spotted fever” among the Saints, Beam observes, “To ensure that they were consuming boiled water, the Mormons drank tea and coffee, a technical violation of Joseph’s Word of Wisdom, the guide to personal conduct that counsels the Saints to abjure alcohol and ‘hot drinks.’ The mortality rate in Nauvoo was double that of Illinois, and of the United States. So many immigrants perished that the Saints arranged a mass funeral service for their dead” (39). No sources are given for these so-called facts; frankly, everything in the quote is problematic in terms of historical accuracy.

American Crucifixion contains many other errors, and here are just a few: Hyrum Smith, William Law, W. W. Phelps, and George Adams were never ordained Apostles in the Quorum of the Twelve (3, 69, 143, 248); Beam writes that Joseph Smith appointed himself as lieutenant general in the Nauvoo Legion (5), but Smith actually received his official military commission and rank in the state militia from Illinois Governor Thomas Carlin; Hyrum Smith never represented Hancock County in the Illinois legislature (69); the record shows that Joseph Smith first saw the gold plates on his first visit to the Hill Cumorah in 1823, whereas Beam claims that “Joseph often mentioned that the angel Moroni refused to show him the golden plates until Joseph was married” (88), which took place in 1827; the Nauvoo Temple was not completed until April 30, 1846, but Beam writes that on May 24, 1845, “Brigham Young presided over a secret ceremony marking the completion of the Nauvoo Temple” (209); Joseph Smith never named Sidney Rigdon as a likely successor to him (232); Utah Valley is south of Salt Lake Valley, not north (255); and Beam writes that over five thousand Latter-day Saints received their temple blessings in November and December 1845 (257), though the dates were actually from December 10, 1845, continuing through February 7, 1846. Some of these may be minor mistakes, but they nevertheless distract readers who are familiar with LDS history and should signal to them the level of the book’s reliability.

So why was Joseph Smith killed? There is not much to debate on the subject. Scholars are of the general consensus that the martyrdom essentially stemmed from a growing anti-Mormon sentiment among the non-Mormon populace around Nauvoo (which sentiment was generated by anxiety over the constant influx of LDS converts into the region), fear of Mormon political domination (particularly in Hancock County), suspicion about the Mormon practice of Freemasonry, distrust of the Nauvoo Legion, repulsion over rumors of polygamy, internal dissensions, concerns over Joseph Smith’s ever-increasing influence, and religious intolerance. Beam touches on these issues, but adds little to what has been known and published by writers and scholars for years.

Beam’s work appeals to a more general audience—those who are interested in learning more about Joseph Smith and particularly those interested in the controversies (deserved or not) surrounding him and his death. Those casually interested in this history may find Beam persuasive; however, more informed readers will recognize that the book was written too hastily. Beam’s work is typical of other secondary-source histories, suggesting that his scholarship, claims, and analysis do not explore much beyond the superficial. While this book has received national attention (and therefore has perpetuated inaccuracies on a large scale), serious academicians of American religious history, Illinois scholars, and Latter-day Saint historians will find little of what Beam writes to be new, reliable, or pathbreaking.

Alexander L. Baugh is Professor of Church History and Doctrine at Brigham Young University and a volume editor of the Joseph Smith Papers. He received his PhD in American history from BYU and since has authored numerous books and articles on American and Church history. 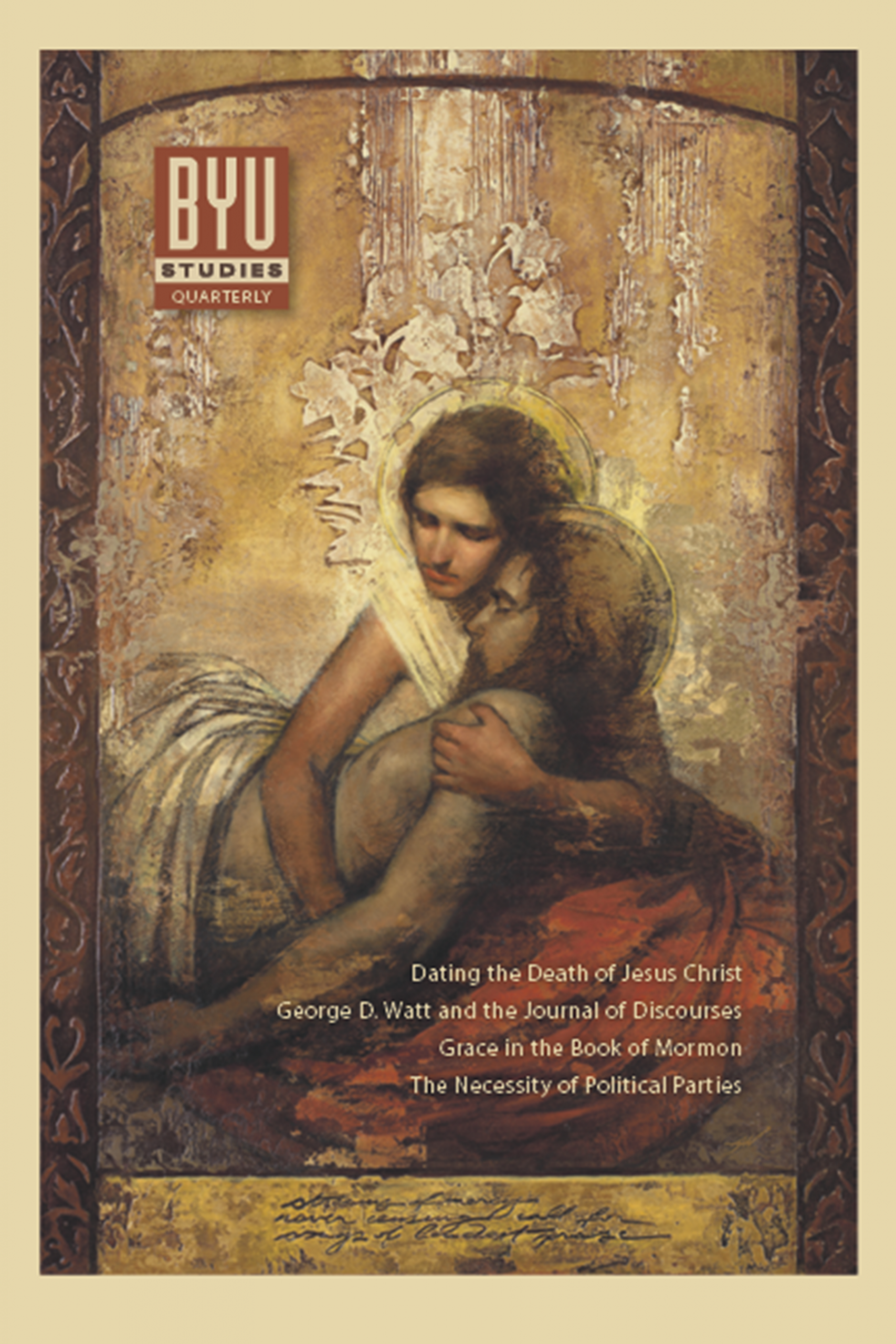