Temples of the Most High and others

The year-long celebration of the centennial of the April 6, 1893, dedication of the Salt Lake Temple sparked the publication and republication of a variety of books celebrating this landmark event in the history of the Church and Utah. Editor Annie Wells Cannon spoke for the Mormon people when she wrote in the May 1893 issue of Woman’s Exponent that the dedication of the Salt Lake Temple was “to the Saints the greatest event for many years.” She added the understatement that “now that it is so handsomely completed well may we feel proud and happy” (in Holzapfel, 93). Today, a century later, the Salt Lake Temple remains for many “The Temple,” the proud and venerable flagship of the fleet, and arguably one of the most remarkable edifices built during the nineteenth century.

The sacred nature of temple ceremonies prevented Latter-day Saints from writing about their temples until Elder James E. Talmage, then newly called to the Quorum of the Twelve, was commissioned by the First Presidency to write The House of the Lord: A Study of Holy Sanctuaries, Ancient and Modern (1912; reprint, 1962, 1976), which remained for several decades the “definitive” treatment of Mormon temples and rites. Then in 1965, W. A. Raynor published The Everlasting Spires: A Story of the Salt Lake Temple, followed by John K. Edmunds’s Through Temple Doors (1978), Elder Boyd K. Packer’s The Holy Temple (1980), Elder Royden G. Derrick’s Temples in the Last Days (1987), and Richard O. Cowan’s Temples to Dot the Earth (1989). Now the Salt Lake Temple dedicatory centennial has evoked several valuable additions to the short shelf of books about Latter-day Saint temples and, in particular, the Salt Lake Temple itself. 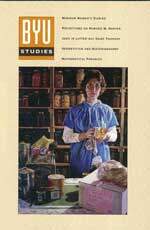