The Day Joseph Smith Was Killed:
A Carthage Woman’s Perspective

Joseph and Hyrum Smith were killed on June 27, 1844, in the recently constructed jail in Carthage, Illinois. Years later, local resident Amanda Benton Smith recorded her own account of the events of that day.1 Twenty-eight years old and a mother of six, Amanda was the wife of Carthage Grey captain Robert F. Smith—the militia officer responsible for protecting the Latter-day Saint prisoners and defending the town.2 In her reminiscence, Amanda describes learning of the Smiths’ deaths and draws a vivid picture of the vacant Hancock County seat as local citizens fled to the countryside in anticipation of the Latter-day Saints’ retaliation, which never came.

An alternative viewpoint articulated with courage and even a little humor is not the only contribution of Amanda’s account. If accurate, her sketch suggests that the leader of the Carthage Greys may not have been complicit in the attack on the jail. According to Amanda’s narrative, her husband, Robert, expressed alarm and concern at the fate of the Smith brothers. If Robert had been aware of the plans to murder Joseph Smith, he did not preemptively warn his own family to leave the town as so many of their neighbors had done. Amanda’s “short sketch” helps contextualize the Smiths’ murders by providing a perspective less frequently considered in traditional Latter-day Saint narratives of the tragic day. In describing the “almost constant terror of the Mormans” she had felt for years, her anxiety over her husband’s welfare, and her desires to protect her family, Amanda gives voice to those Hancock County non–Latter-day Saints who were not involved in the deaths of the Church’s prophet and patriarch. Like the Latter-day Saints in nearby Nauvoo, Amanda felt threatened by her neighbors and sought to protect her own interests. Her story helps capture the emotions shared by Church members and non–Church members alike during the tense summer of 1844.

The enclosed manuscript is one written in her own hand by Mrs. Robt.Smith, wife of Captain Robert F. Smith, commander of the Carthage Grays, telling of her“trials” on the day Joseph and Hiram Smith were killed by the mob at the Carthage jail. The Smiths at that time lived on the place we know as“Cottonwood” on Gospel Four Corners, our present home place to which Father and Mother moved in 1864.

This is a very valuable manuscript, new and unpublished histo ry of the Mormon episode. It shows the terror of the Carthage people, also that Capt. Smith himself believed it possible the Mormons would rise against the Gentile inhabitants. This manuscript was given to me by a member of the Smith family.

A short sketch of the trials of Mrs. R.F.Smith at the Killing of the Smiths. The Mormans Prophet

They were killed on the 27th. of June 1844 that day I was unusually depressed and out of sorts had been liveing in almost constant dred terror of the Mormans for years and never knew from day to day and hardly from one hour to another, what dreadful catastrophe would happen and when the runner reached me. about half past two P. M. that a mob had collected on the prarie some a few miles out and were on the road to Carthage. Some thought they were Mormans comeing to liberate the Smiths from jail and and would destroy the town & and every thing in it my neighbors began to make preperations to leave their homes with their families and the part of town where I lived was soon entirely deserted but myself. my husband was Captain of the Captain of the Carthage Greys. he had not been at home a single night for two weeks. he with [p. 1] his men had been keeping gard of the town day and night all that time. every thing seemed so gloomy at home, but I thought I would not give way to my feelings. so I dressed my six little children in clean frocks and put the baby in his little wagon and sent them to visit a friend of mine just one block away. an hour or so after I had sent them away. I heard the fireing of many guns. I got up from my chair to go to the front door but was powerless to move for a minute or so. When I became concious there was a Morman girl, who lived in the neighborhood, standing in the door. I was holding on to the back of my chair and she was ringing her hands and saying “Oh my God.” Mrs Smith they are shooting the men down at the Jail and throwing them out of the window.[”] I soon [p. 2] collected my senses. and my first thought was of my absent children and I started to bring them home. by that time the mob had scattered and were all over the town. I met one of them but did not know him as he was disguised. but he knew me and told me what had occured, that was the first I knew of the truth, who had been killed &c. I got my little children together and went back home hopeing I might find my husband there. but was disapointed. there was not a soul stiring in that part of the town, then I started down to the head quarters, on the square as it was called, to inquire for my husband. the officer of in command there told me that my husband had been ordered by Gov. Ford to guard the town, and that I would find him down at the jail. I went there but had not the courage to enter the building. so sent a little boy [p. 3] who was standing there. in to tell Captain Smith that his wife was out side and would like to see him. I was getting very anxious, as it was getting twards evening, to know our fate for the comeing night My husband came to me. but was full of trouble and worry at over the terrible ending of the prisoners and did not have many comforting words for his wife and children. he told me that his duties were such that that it was impossible for him to leave there. and for me to go back home and he would send word to a friend up in town that had a team and wagon to call for us and take us to the house of an old friend about four miles out in the country. the friend came with his team soon after I got home so I had no time to get supper for my children but started at once. I felt as tho’ I would [p. 4] never want food for myself, again.

Amanda Smith’s home was located on the southwest corner of Locust and West Main streets (bottom box) in Carthage, Illinois. According to her description of the events of June 27, 1844, she was able to hear from her home the shots fired at Carthage jail, located on the northeast corner of Walnut and Fayette streets (top box). 1839 plat of Carthage, Hancock Co., Illinois, Plat Books, 1836–1938, vol. 1, microfilm 954,774, U.S. and Canada Record Collection, Family History Library, Salt Lake City.

About five P. M. of the same day a messenger from Carthage brought us word that every thing was quiet and that the dead bodies of the Smiths had been taken to Nauvoo. there were only a few people in town and they did not apprehend any danger at that time from the Mormans My husband and two other gentlemen hired a team and Carriage and we went back to Carthage that night it was several days before the children that went to agusta got home the little girl enjoyed it so much she wanted to know how soon we were going again. [p. [15]]4

Alex D. Smith is a historian with the Joseph Smith Papers in the Church History Department of The Church of Jesus Christ of Latter-day Saints. He has coedited six volumes in the Journals and Documents series and is currently editing the Nauvoo journals of William Clayton.

1. “A Short Sketch of the Trials of Mrs. R. F. Smith at the Killing of the Smiths, the Mormans Prophet,” holograph manuscript in the handwriting of Amanda B. Smith, fifteen pages, Abraham Lincoln Presidential Library, Springfield, Illinois.

2. Amanda Benton Smith (June 9, 1816–January 9, 1892) was born in Philadelphia, Pennsylvania, to John and Mary Ann Benton. She was married to Robert Frederick Smith (August 2, 1806–April 25, 1893), who served in the Union army in the Civil War as a Brevet Brigadier General. Amanda and Robert are buried in the Oakwood Cemetery in Hamilton, Illinois.

3. TEXT: Supplied character is missing due to a hole in the manuscript page.

4. TEXT: Page number here is supplied since corner of leaf is missing. 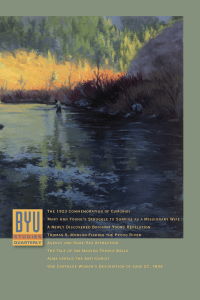