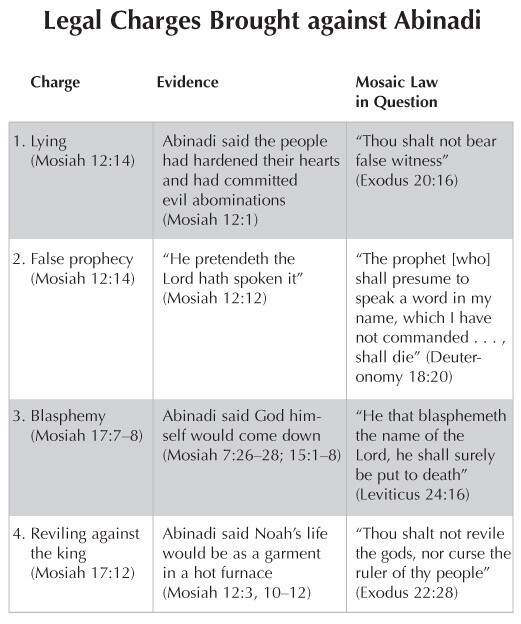 Though the charges proved unfounded, Abinadi was accused by Noah’s priests of violating Mosaic law. This chart lists (1) the four charges brought against Abinadi, (2) the Mosaic laws on which each accusation rested, and (3) the false evidence that Noah’s priests used to accuse him. The priests of Noah knew the law of Moses thoroughly enough to twist it and use it against Abinadi when he prophesied against Noah and of Jesus Christ. Although the first three charges all failed, they were at least nominally grounded in the law. Abinadi was finally put to death for having “reviled the king” (Mosiah 17:12), which is prohibited in Exodus 22:28. Ultimately, however, these tactics worked to the priests’ own undoing. As Alma later counseled the city of Ammonihah: “Behold, the scriptures are laid before you; if ye will wrest [twist] them it shall be to your own destruction” (Alma 13:20). according to its order in the scriptural passage it appears in.)