135 – Wordprints and the Book of Mormon 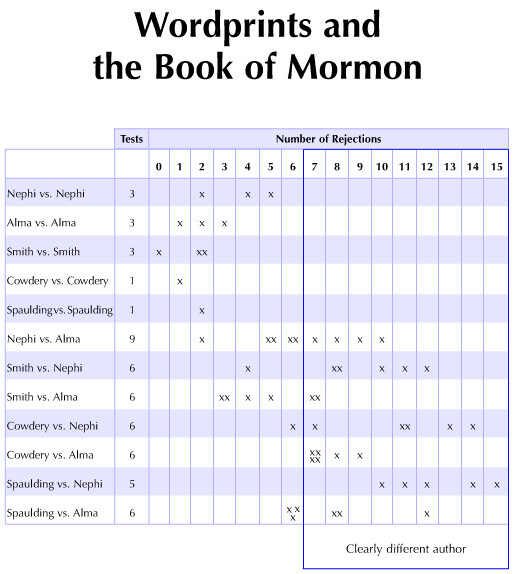 Modern computers have given birth to a new science of analyzing word patterns in documents whose authorship is disputed. By wordprint analysis, it is now possible with a high degree of certainty to tell which suspected authors did not write a given work. Wordprinting is based on the somewhat surprising fact that every author that has been studied thus far subconsciously uses sixty-five identifiable patterns, involving words such as and, the, of, and that, at rates that, from a statistical standpoint, differ significantly from those of other authors. The higher the number of “rejections” or differences, the less likely it is that the tested samples were written by the same person. This chart shows the results of tests that were run by John L. Hilton, comparing writings of Nephi and Alma with the words of Joseph Smith, Oliver Cowdery, and Solomon Spaulding. In every set comparing the Book of Mormon texts against these three writers, at least seven (and often many more) rejections were measured. These results yield strong statistical evidence that the wordprints of Joseph Smith, Oliver Cowdery, and Solomon Spaulding are not measurable in the Book of Mormon.