140 – Comparison of European and Mayan Armor 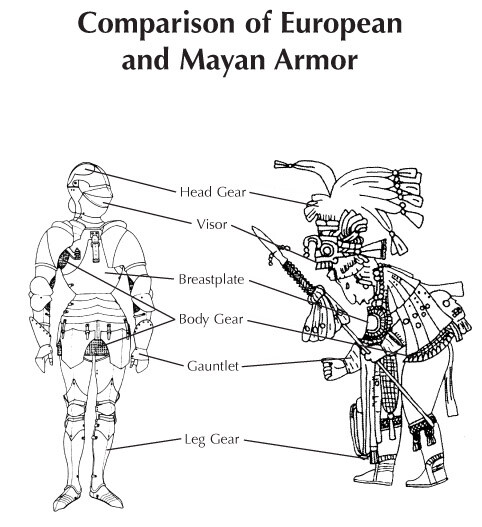 European and Mayan warriors used similarly named pieces of armor, such as head gear, breastplates, body gear, and gauntlets, but the styles and materials they used were very different. The Book of Mormon mentions breastplates, shields, armor, headplates, arm-shields, animal skins, thick clothing, and bucklers as types of armor. What were they like? Mayan soldiers used thick protective jackets made of double-thick quilted cotton that were often worn under animal skins. Nephite breastplates were probably also similar to Mayan breastplates, which were made of materials such as wood, bone, shells, jade, stones, and pieces of metal. The term head-plates in the Book of Mormon is unusual, but Mayan records may again help to clarify: Mayan head-plates, or carved jade plaques, were worn attached to leather or cloth headbands. Hats that were protected with plates of stone, wood, or metal could also be considered head-plates. Mayan shields were usually made of reeds, cloth, or wood. Armor terminology in the Book of Mormon interestingly reflects differences between Old World and New World armor. The Book of Mormon uses biblical terms when ancient Near Eastern and Mesoamerican armors are similar but different terminology when Mesoamerican armor (e.g.,headplate) differs significantly from Old World armor (e.g., helmet), thus indicating the precision of the Book of Mormon accounts.