154 – Further Details in the Land of Nephi 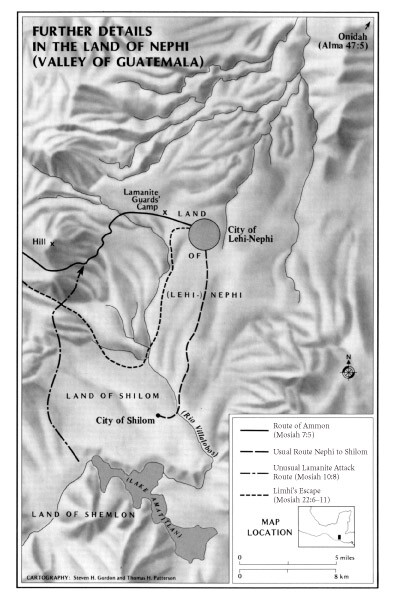 This map shows activities in and around the land of Nephi. The city of Nephi was settled by Nephi and his followers when they fled inland many days from the land of their first inheritance around 570 B.C. (see 2 Nephi 5:7). In the second century B.C., the land and city of Nephi (now called the land or city of Lehi-Nephi) was the location of the events reported in Mosiah 7–22. A group of sixteen men, led by Ammon, arrived from Zarahemla, camping at a hill north of the land of Shilom (see Mosiah 7:5). They were taken to King Limhi in the city of Lehi-Nephi, which was then in subjugation to the Lamanite king. Soon Limhi and his people escaped by skirting the land of Shilom (see Mosiah 22:8), not following what would have been the normal path down the valley to Shilom. Earlier, Zeniff had sent spies down to the land of Shemlon, but the Lamanites slipped around to the north side of the land of Shilom and put Zeniff ‘s colony at a distinct disadvantage, which they overcame by trusting in the Lord (see Mosiah 10:8–9, 19–20). This map identifies the Valley of Guatemala as the center of the land of Nephi, which works well in many respects, although any such identification still remains tentative.