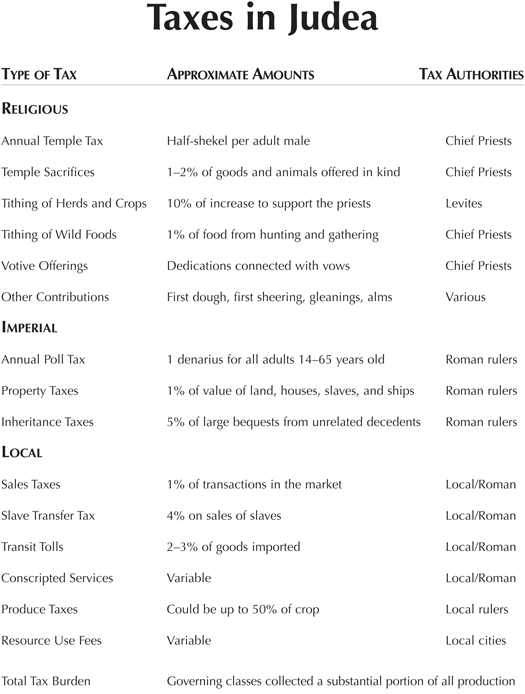 Taxation was as much a part of the world of the New Testament as it is in our world today. Various kinds of taxes were imposed, by differing authorities, and for an array of purposes. Religious taxes supported the temple and the central Jewish institutions. Imperial taxes went to support the Roman government, and local taxes were levied by Jewish rulers and paid for the infrastructure of Judean commerce. The total tax burden was perhaps as high as 60 percent of all production, but this burden was not primarily imposed by the Romans. As in any age, the combination of these many taxes resulted in popular dissatisfaction.

John E. Stambaugh and David L. Balch, The New Testament in Its Social Environment (Philadelphia: Westminster, 1986), 74-78.
K. C. Hanson and Douglas E. Oakman, Palestine in the Time of Jesus: Social Structures and Social Conflicts (Minneapolis: Fortress, 1998), 113-16.
John A. Tvedtnes, “The Priestly Tithe in the First Century A.D.,” MWNT, 261-68.
Ronald Z. Domsky, “Taxation in the Bible during the Period of the First and Second Temples,” Detroit College of Law Journal of International Law and Practice 7 (summer 1998): 225-61.