3-2 References to the Sadducees 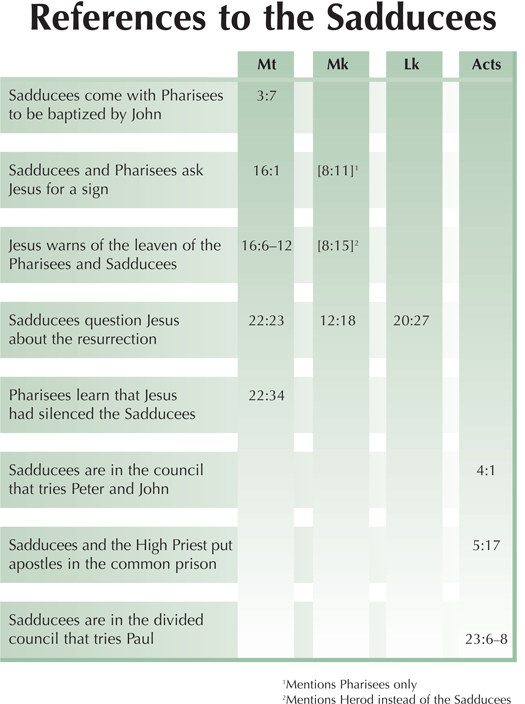 The most influential religious groups in Jesus’ world were the Sadducees and Pharisees. As chart 3-2 shows, the Sadducees are rarely mentioned by name in the New Testament. They were influential, however, in the political sphere. They probably controlled a majority of the Sanhedrin and may be identified or closely associated with the Chief Priests (see chart 3-9).

Chart 3-3 shows the most likely legal differences between the Pharisees and Sadducees during biblical times and perhaps later. These issues have been reconstructed out of later Jewish writings, especially the Talmud. One of the main differences between the Pharisees and the Sadducees was what they counted as “law.” Jesus was frequently asked questions about how the law should be understood, and from all appearances, this was a controversial topic of the day. The Pharisees included the oral law, or traditional rules that go beyond the legal materials found in the written Torah (the first five books of the Bible). Knowing something about the kinds of legal arguments that were controversial at the time of Jesus helps modern readers understand some of the questions that were asked of him and how his audiences may well have understood the contemporary significance of his answers and teachings.