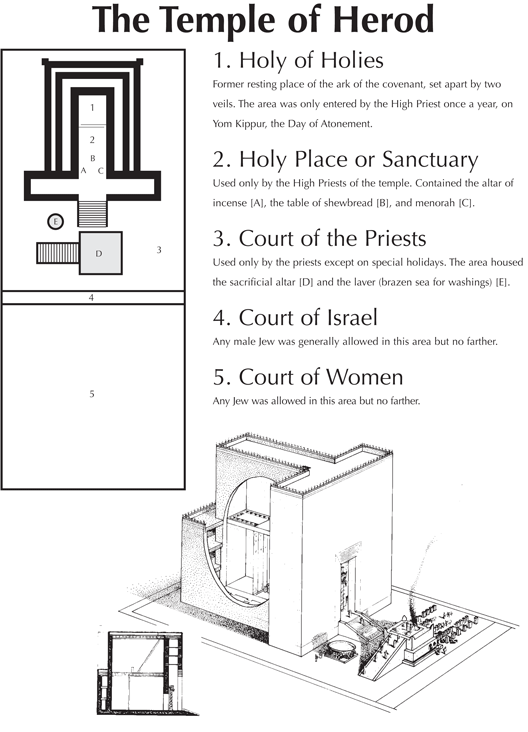 Around the time of Jesus, the Mishnah began to take shape. This collection recorded the oral sayings of various Jewish rabbis. Chart 3-4 lists the “six orders” of the Mishnah and the main subjects that are discussed and regulated under each of these headings. Topics included such matters as tithing, Sabbath laws, the temple tax, adultery, divorce, oaths, leprosy, and purity. It is interesting to note that Jesus had something important to say about most of these main subjects.

The heart of Jewish religion and society was Jerusalem and its temple. Chart 3-5 maps some of the main buildings and sites of Jerusalem, where Jesus often went. By modern standards, the city was still relatively small in the days of Jesus. Archaeology allows modern researchers to reconstruct many of the features of the Holy City. This chart shows the walls, gates, pools, buildings, and main areas that Jesus would have frequented. Scripture references locate places mentioned in the New Testament by name.

The floor plan of the temple is given on chart 3-6. This building was spectacular and magnificent, adorned with splendor and wealth. Its design emphasized the sanctity of the inner sanctuary, the Holy of Holies, where the High Priest alone officiated. The New Testament, especially in the Epistle to the Hebrews, recognizes Jesus as the new and eternal High Priest who offered the ultimate atoning sacrifice. The temple proper was contained within the temple complex located on the top of a large platform known as the Temple Mount. In the porticos surrounding that area were money changers, merchants selling sacrificial animals, and meeting places, where Jesus often taught, worked, challenged the established regime and was challenged back. Rendition of the temple courtesy of Michael Lyon.