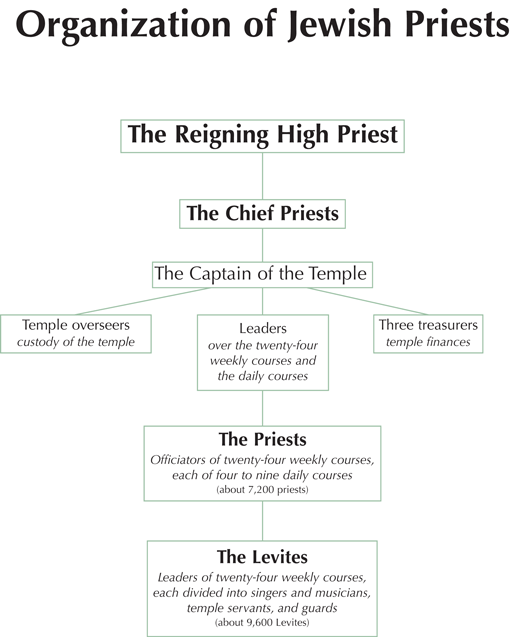 Thousands of people worked in and around the Temple of Jerusalem. Chart 3-7 shows the basic organization of the temple priests, who worked under the direction of the reigning High Priest, a Sadducee. Under him was a council of Chief Priests (see also chart 3-9). They appointed a captain of the temple. His guards or overseers protected the temple and were involved in the arrest of Jesus. Three treasurers maintained the temple treasury, which was opulent. By some estimates, the Temple of Herod housed over 10,000 talents of gold and silver, a staggering amount of wealth (see chart 2-7). The priests were the main officiators in the temple sacrifices and services, while the Levites were distinctly below the priests in status. Both groups are mentioned by Jesus in the parable of the Good Samaritan in Luke 10.

Chart 3-8 lists the High Priests down to the destruction of the temple in A.D. 70. Caiaphas, who was the High Priest at the time of the trial of Jesus, reigned for almost twenty years, an exceptionally long term in office.

Most powerful were the Chief Priests, a small group of extremely influential politicians and managers. As can be seen from chart 3-9, the Chief Priests were the dominant source of sustained opposition to Jesus. Often they worked behind the scenes, frequently alone, but on several occasions they enlisted the involvement of the elders or rulers (venerable or powerful men of the city). Their scribes (who were notaries, lawyers, recorders, readers, or interpreters) were often by their side, yet only rarely did Pharisees have any dealings with them.