8-11 Verses in the Temple by Gospel 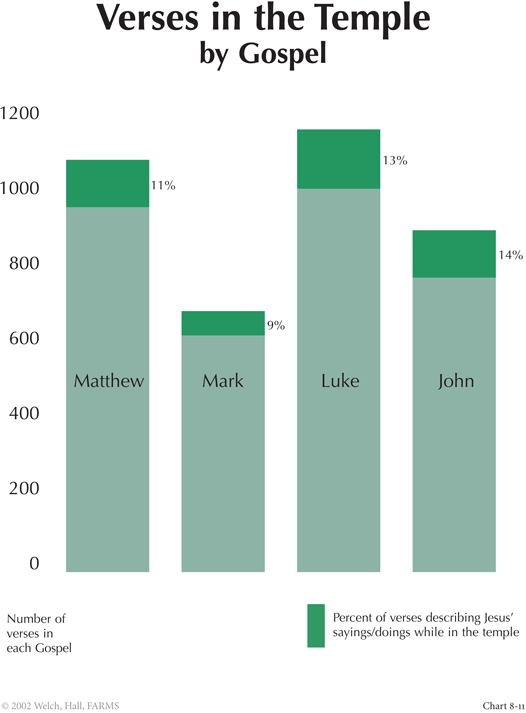 A strong thread runs through all four Gospels: whenever Jesus was in Jerusalem, he spent time at the temple. Jesus did not reject the idea of the temple. Instead, he desired to replace the temple system in Jerusalem with a new ritual order, a sacred way of holiness and purity. The temple was very important to Jesus.

The bar graph in chart 8-11 displays the total number of verses in the Gospels. The darker section of each bar shows the percent of verses that describe Jesus’ sayings and doings in the temple at Jerusalem. While John devotes the highest percentage of writings to these themes, Luke uses thirty-one more verses describing what Jesus said and did there.

Chart 8-12 shows that the earliest Christians remembered vividly many things that Jesus said and did at the temple. All four Gospel writers remember Jesus walking and teaching in the temple. In the Synoptics, directly following his triumphal entry onto the holy mount, Jesus drove out the money changers. The temple was seen in the Jewish world as a source of God’s power. From this sacred place flowed streams of living water and divine blessing. Jesus was unwilling to misuse those powers. Recollections of Jesus at the temple are even stronger in the Gospel of John, and not just at the end of Jesus’ ministry as in the other Gospels, but on many occasions for Passover and on other holy celebrations.

In this light, it is instructive to connect what Jesus said with where he said it. Some of his most memorable teachings about obedience, chastity, marriage, lordship, authority, priesthood, tithing, consecration, judgment, and the afterlife were given at the temple.