8-4 Dating the Birth of Christ 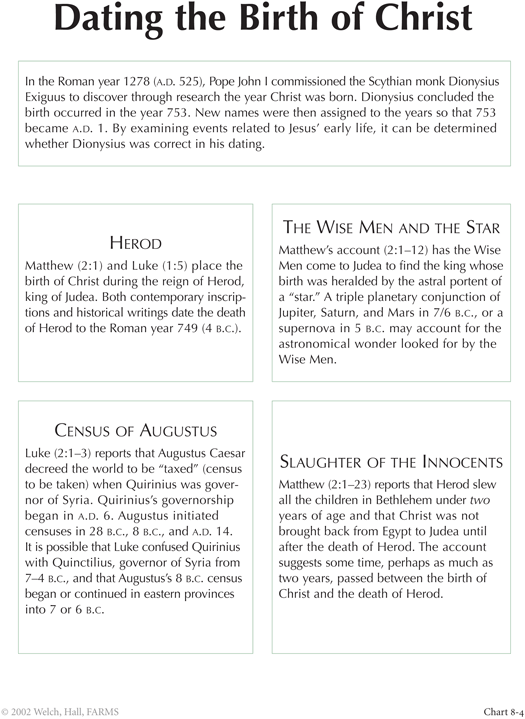 The year of the Savior’s birth was a matter of controversy in ancient times and remains so today. If the date was known to the friends and associates of Jesus, that knowledge appears to have been lost. By the sixth century the question had become sufficiently pressing to prompt Pope John I to commission a leading scholar of the day, the Scythian monk, Dionysius Exiguus, to determine the year of Christ’s birth. Dionysus’ researches led him to conclude that Jesus was born in the Roman year 753. By papal decree the Roman dating system was abandoned and the year 753 was renumbered as A.D. 1. That present year of 1278 became the year A.D. 525.

Whether Dionysius was correct in his calculation remains a matter of some dispute, particularly as certain events mentioned in connection with Christ’s birth can now be accurately dated through Roman epigraphic and historical records known in modern times, for example, the death of Herod in the year 749 (4 B.C.). Chart 8-4 lists the events for which dates are known or can be conjectured.

The Church of Jesus Christ of Latter-day Saints has not taken an official position on the issue of the year of Christ’s birth. Bruce R. McConkie, an apostle, offered what for the present appears to be the most definitive word on the question: “We do not believe it is possible with the present state of our knowledge—including that which is known both in and out of the church—to state with finality when the natal day of the Lord Jesus actually occurred” (Mortal Messiah, [Salt Lake City: Deseret Book, 1979-81], 1:349 n. 2).