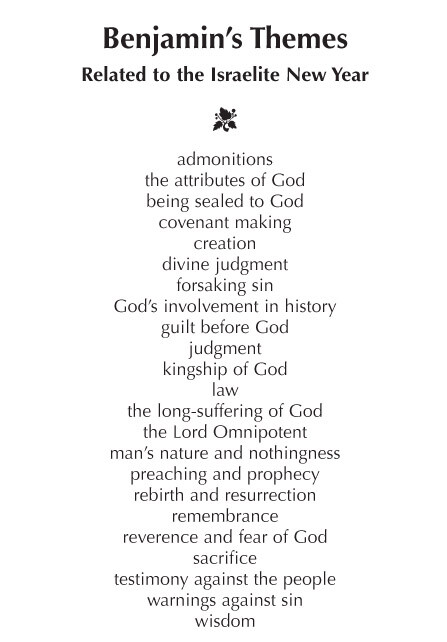 Ancient Israelites celebrated several holy days, many elements of which have become the modern Jewish celebrations of Rosh ha- Shanah (New Year), Yom Kippur (Day of Atonement), and Sukkot (Feast of Tabernacles). These three particular celebrations took place during the early autumn season, specifically during the seventh month of the year. Because the Nephites and Mulekites originally came from Jerusalem, it is likely that they continued some of these festival traditions in the Americas. As this chart shows, King Benjamin’s speech in Mosiah 2–5 contains themes especially pertinent to the Israelite New Year, suggesting that this speech was delivered near that time of the year. Benjamin’s proclamation of his son Mosiah as king at this time is especially fitting, considering that part of the ancient Israelite New Year celebration included proclaiming or sustaining the king or high priest as an authority figure. Each element on this chart is found both in Israelite tradition and in Benjamin’s speech. The similarities between Benjamin’s speech and ancient Israelite celebrations are circumstantial evidence attesting to the historical backgrounds and divine origins of the Book of Mormon.