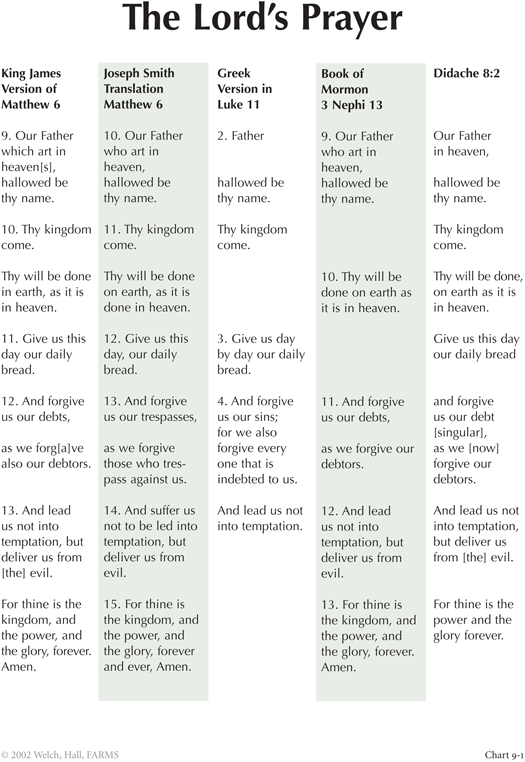 Chart 9-1 compares five versions of the Lord’s Prayer. Each one is slightly different. In addition to the four prayers found in the scriptures, the fifth comes from a very early Christian handbook of instructions known as the Didache. Because the early Christians understood that this prayer was not to be rigidly recited verbatim, the surviving variations are not unexpected.

Similarly, chart 9-2 displays the Beatitudes found at the beginning of the Sermon on the Mount. These statements, beginning with the word “blessed” (in Greek, makarios; in Latin, beatus), promise ultimate blessedness, happiness, or beatification, especially in the afterlife, to individuals who have acquired the requisite attributes of righteousness. This chart compares the Beatitudes in three versions of the Sermon. Jesus gave basically the same sermon on several occasions, modifying details to suit the particular audience or setting. In Matthew 5-7, Jesus addressed faithful disciples at the outset of his ministry. In Matthew 5-7 JST, he addressed his Twelve Apostles as he sent them forth as missionaries. In 3 Nephi 12-14, he again presented essentially the same speech but now modified it to instruct a group of righteous people gathered at the temple in the city of Bountiful following his resurrection. Some people seek to find “the original version” of the Sermon on the Mount, but that quest may be guided by the faulty assumption that Jesus gave the Sermon only on one occasion. Ministering for over three years, he would have repeated his basic messages on several occasions.