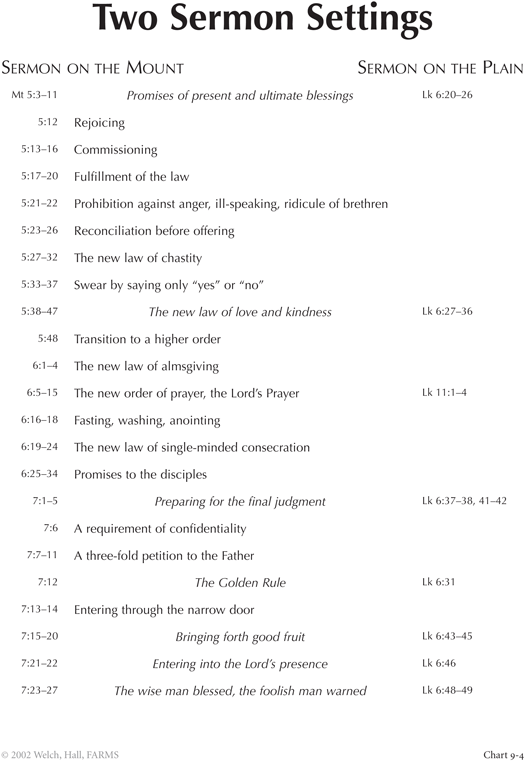 Matthew 5-7 reports Jesus’ Sermon on the Mount. Luke 6 gives the Sermon on the Plain. The two texts are similar in many respects, the two speeches following essentially the same order. Luke begins with certain beatitudes, followed by a set of woes or curses. Brief instructions are given regarding loving enemies, turning the other cheek, giving to those who ask, lending to sinners, being merciful and doing well unto others (the last point being one of the few major elements taken out of order from the Matthean text). Luke then skips all the material found in Matthew 6 (some of which is found when Jesus speaks in private to his apostles in Luke 11), and then presents most of the items found in Matthew 7. In chart 9-4, the shared elements are in italic type.

Luke’s selection of materials can be explained by the different settings in which the two speeches were given. The Lucan speech was delivered to a large, public audience of Jews and gentiles who had come to hear Jesus probably for the first time. Jesus gave them the more public elements of his gospel message. Missing from the speech in Luke are elements that one would expect to be reserved for the closer circle of disciples, such as the commission to be the light of the world, the issuance of commandments, and the explanation of sacred practices found in the Sermon on the Mount.