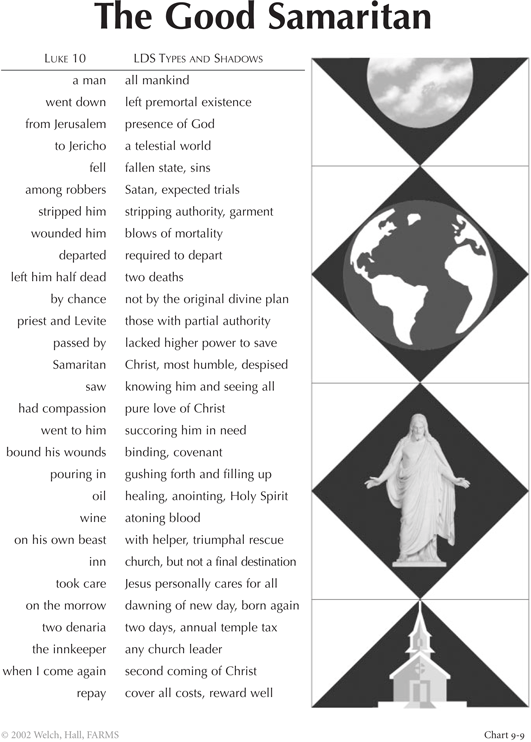 One of the most influential parables is that of the good Samaritan (Lk 10:30-35). People all over the world speak of being a good Samaritan, of helping people who are in need. Jesus told this parable to a lawyer who asked, “Master, what shall I do to inherit eternal life?” As dramatic and crucial as this parable’s plain practical content clearly is, a time-honored but now almost forgotten tradition sees this story also as an impressive allegory of the fall and redemption of all mankind. The roots of this interpretation reach deep into early Christian literature. Writing in the late second century A.D., Origen stated that this interpretation came down to him from “one of the elders”:

The man who was going down is Adam. Jerusalem is paradise, and Jericho is the world. The robbers are hostile powers. The priest is the law, the Levite is the prophets, and the Samaritan is Christ. The wounds are disobedience, the beast is the Lord’s body, the inn, which accepts all who wish to enter, is the Church. And further, the two coins mean the Father and the Son. The manager of the inn is the head of the Church, to whom its care has been entrusted. And the fact that the Samaritan promises he will return represents the Savior’s second coming.

Indeed, to a listener who understands the plan of salvation, each element in this allegory can be seen as corresponding significantly with an important step in the journey of all mankind toward eternal life. Understood in this way, this parable is not only about a man who went down to Jericho but also about every person who comes down to walk upon this earth.Reference: