It is just possible that an autobiography has a natural advantage over a third-person narrative. In its immediacy and directness, its personal point of view, its emotional commitment, and in its often semi-polished prose, it can give the reader a sense of reality and participation that a more objective work might miss. Certainly such an account avoids the pedantry that often mars scholarly biographies. At any rate, it struck this reviewer that A Mormon Mother (volume one of a new series, UTAH, THE MORMONS AND THE WEST) made far more captivating reading than did such highly-touted recent works as Elizabeth Longford’s massive study of the Duke of Wellington, Jane Hodges’ epistle-based biography of Jane Austen, and Ralph Martin’s immensely popular two-volume portrait of Jenny, the mother of Winston Churchill. The only really damaging characteristic of the book is the author’s inclusion of so many letters to and from her children that they clutter the work with irrelevancies and mar the flow of an otherwise straight-forward and vigorously-told story.

At the urging of her children, who considered the work a highly personal memoir, Mrs. Tanner wrote her autobiography in 1941, the last year of her life, and for years very few copies were to be found outside the family circle. Fortunately, Mr. Dale Morgan recognized A Mormon Mother as far more important than a private narrative and urged this general publication, and one easily recognizes that although the narrative is, indeed, personal, it is also an excellent microcosmic picture of Mormon life in transition, as it moved from pioneer settlement to modern metropolis, from a tight, self-contained and all embracing community to a disunifying cosmopolitan world, from childlike faith to disturbing intellectual inquiry.

Annie Clark was born in 1864 in Farmington, Utah, the second child of her father’s second wife, and the sense of being second seemed to plague her all her life. Hence, her chief ambition appears to have been to make her children front runners. Her father, Ezra T. Clark, was a pioneer who had known the Prophet Joseph personally, who was intimately acquainted with contemporary Church leaders, and who stood for impossible faith and loyalty in his Church/community positions. He served several missions for the Church, and it was on one such mission to England in 1856 that he met Susan, the girl who was to become his second wife and Annie’s mother. Ezra lived with his first wife, “Aunt Mary,” but Susan and her children were reasonably well cared for and properly respected, living in a pleasant adequate house across the street from Ezra and Mary’s larger home. 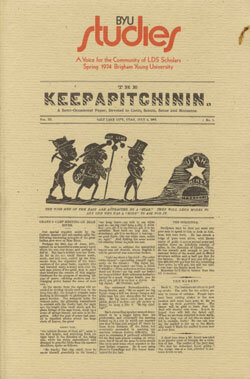 Previous:
The Way to the Sun