The writing of this book was undertaken by Mr. Richards in acceptance of a challenge in an “open letter” by Mr. Stephen M. Silver “to bring your doctrine forth in a manly way, that it might be put to the test. . . .” It seems that Mr. Silver, whose parents were neighbors to Mr. Richards, had left the L.D.S. Church and joined the Church of the Firstborn of the Fulness of Times. Mr. Richards, who was fond of his neighbors, was eager to bring young Mr. Silver back into the Church. He told Stephen’s mother that he had found enough “proof and information” to prove the doctrine of the Church of the Firstborn incorrect. Mr. Silver stated that he at first thought to write privately to Mr. Richards but believing that their “lectors” would be “equally interested” in Mr. Richards’ findings, decided to write “this open letter.”

In the introduction to the book, it is made clear that the main problem of controversy is “Priesthood Government . . . ; who’s got the keys and who doesn’t.”

All prophets of the L.D.S. Church down to and including Joseph F. Smith are accepted by the “LeBaronites,” and both churches accept the four standard works of the L.D.S. Church. The LeBaron group also accepts the Teachings of the Prophet Joseph Smith by Joseph Fielding Smith. In addition, they also acknowledge their own booklet Priesthood Expounded (published in August, 1956) and their periodical Ensign as being official. In addition to using the two above-mentioned publications, Mr. Richards also obtained information concerning the Church of the Firstborn of the Fulness of Times from tape-recorded interviews with the leaders of their church.

Mr. Richards’ first chapter deals with the founding and organization of the Church of the Firstborn of the Fulness of Tithes in some detail, giving also their articles of incorporation. Chapters two and three deal with the LeBaronite claims to having two priesthood offices higher than that of president of the Church. Mr. Richards brings out the fact, admitted by the LeBaronite leaders, that there is no written evidence that Benjamin Johnson was ever ordained to be president of the High Priesthood. Mr. Richards also points out that nowhere in L.D.S. literature is there any evidence that the patriarchal office is higher than the office of president of the Church, nor is there any evidence that the office bestowed by John the Baptist had any patriarchal authority whatsoever. Another major problem discussed is whether the apostleship is a priesthood or an office and whether apostles have the authority to ordain other apostles or not.

Because the LeBaron group claims to have received all of their authority from Benjamin Johnson, his writings are used by Mr. Richards to show that Joseph Smith gave “all the keys and powers bestowed upon me” to the Twelve Apostles, and that “after the Prophet’s death, Brigham Young became Israel’s great leader, a prophet, seer and revelator to the Church in all the world . . . holding every key of priesthood and power pertaining to the kingdom of God on the earth and the salvation for the dead.”

Sundry matters are next taken up in a series of thirty-five questions to Stephen Silver, in which Mr. Richards seeks an answer to what he considers certain false teachings and statements of the LeBaronites. One of these is the claim by William Tucker that Joel F. LeBaron is the “one mighty and strong.” (D&C 85:7), when Joel F. LeBaron had personally told Mr. Richards that his father Alma Dayer LeBaron was the “one mighty and strong.”

The author concludes his work by pointing out that both Alma Dayer LeBaron and wife, Maude LeBaron, who had been excommunicated from the Church on grounds of adultery, had written to President Heber J. Grant (Mrs. LeBaron having written on three different occasions, the first time in July, 1926 and the third time in Feb., 1942), asking for forgiveness and readmission into the Church. Mr. Richards poses the question of why they would do this if they knew that Heber J. Grant had no authority and that Alma Dayer LeBaron himself claimed to have the highest priesthood authority on earth.

It is the reviewer’s opinion that Mr. Richards has done a very capable job in performing the task that he set out to do. 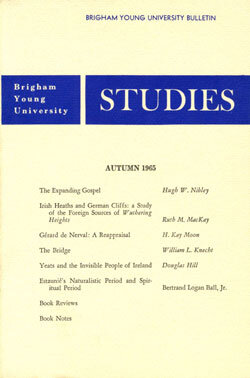 BYU Studies Quarterly 07:1
Next:
Commentary on the Pearl of Great Price