The experience of arriving on a campus to live and study with classmates from a diverse range of backgrounds is essential to students’ training for this new world, nurturing in them an instinct to reach out instead of clinging to the comforts of what seems natural or familiar. We know that connecting with people very—or even slightly—different from ourselves stimulates the imagination; and when we learn to see the world through a multiplicity of eyes, we only make ourselves more nimble in mastering—and integrating—the diverse fields of knowledge awaiting us.1

At the institutional level, BYU’s statement on fostering an enriched environment notes that “it is the University’s judgment that providing educational opportunities for a mix of students who share values based on the gospel of Jesus Christ and come from a variety of backgrounds and experiences is an important educational asset to BYU.”2 Diversity is also valued at the college and department level. For example, one of the program objectives for the undergraduate sociology degree is instruction in the “diversity of social life, the origins of inequality, social conflict, and the relations of power in modern society.”3 As sociology faculty, we consider it essential that students be prepared to work in a diverse workforce and to serve in an international church.

First, students should be aware of both the positive and negative aspects of strong group identification. In my introductory sociology course, students read about how group identification can generate a sense of belonging and loyalty—and also how it can create feelings of superiority. This can produce group rivalries and, if taken to an extreme, can lead to discrimination and hatred. Strong identification with members of an in-group is the basis for many gender, racial-ethnic, or religious divisions. Group favoritism can lead to biased perceptions. Following a double standard, we sometimes view the traits of our in-group as virtues, while we see the same traits as vices in out-groups. For example, men may view an aggressive man as assertive, but an aggressive woman as pushy. A religious group may perceive their opposition to other groups as “taking a stand,” but define opposition toward themselves as harassment. “To divide the world into ‘we’ and ‘they’ poses a danger for a pluralistic society. . . . One consequence of biased perception is that harming others can come to be viewed as justifiable.”4

The BYU experience helps foster strong in-group identification. We want students to feel they belong and to be loyal to their faith, but we don’t want strong identification to lead to feelings of superiority or self-righteousness. We need to encourage loyalty but not superiority, critical thinking but not arrogance.

Second, students need greater awareness of diversity within the United States—political, socioeconomic, family, and religious background—as well as diversity within BYU. Diversity, at BYU, you may ask? As Natalie noted, unlike state schools, our students come from all across the United States and about 6 percent of our student body is international. In addition, many of our students have lived abroad as missionaries or as students and speak a second language. However, in addition to geographic diversity, I think we also have a wealth of perspectives among the members of the BYU community that we can appreciate and learn from. Those of us who are LDS share a testimony of Jesus Christ and the Restoration and strive to be temple worthy, but our social, political, or academic views need not agree. We do not even agree on every point of Church doctrine.

It is not expected that the faculty will agree on every point of doctrine, much less on the issues in the academic disciplines that divide faculties in any university. It is expected, however, that a spirit of Christian charity and common faith in the gospel will unite even those with wide differences and that questions will be raised in ways that seek to strengthen rather than undermine faith. It is also expected that faculty members will be sensitive to the difference between matters that are appropriate for public discussion and those that are better discussed in private.5

Third, we need to foster a spirit of tolerance on campus. My sense is that we can do a better job of appreciating diversity and modeling tolerance at BYU. There is an undercurrent of intolerance among faculty at times: if faculty members lean to the left politically or socially, for instance, then their testimony is questioned; if they lean far to the right, then their intellect is questioned. Rather than being intolerant and confrontational, we should be willing to listen and respect differences of opinion—and we can begin among ourselves.

Fourth, we need to avoid feelings of superiority. One place to start is to recognize when feelings of superiority become part of our group identification. President Hinckley stated, “We must cultivate tolerance and appreciation and respect one another. We have differences of doctrine. This need not bring about animosity or any kind of holier-than-thou attitude.”6 Now, he was speaking specifically about differences across faiths, but I believe his counsel also applies to differences within our own religious community.

I have a Bizarro cartoon by Dan Piraro that I keep as a reminder in my Relief Society materials. It shows Peter at the pearly gates interviewing a man before allowing him to enter: Peter says, “You were a believer, yes. But you skipped the not-being-a-jerk-about-it part.”7 I think it is essential that within our community we as faculty model the importance of believing without being a jerk about it. When we think that we have all the answers, that our perspective is the only perspective, that our view is the only true way, then we become intolerant and arrogant. We need to teach students to be critical thinkers, but not self-righteous or prideful, and to acknowledge and respect difference without contention.

We can model academic humility and acceptance by being respectful of everyone on campus and acknowledging the importance of each contribution to the university community. Having a PhD shouldn’t lead to arrogance and the treatment of staff or students as second-class citizens. Unfortunately, there are faculty who treat secretaries or staff on campus as inferior, almost as servants, rather than as equals or as partners in the education effort.

Fifth, we need to teach students how to disagree respectfully. We model tolerance when we are able to respectfully agree to disagree among ourselves; we must be civil in our interactions. President Hinckley said, “Each of us is an individual. Each of us is different. There must be respect for those differences. . . . We must work harder to build mutual respect, an attitude of forbearance, with tolerance one for another regardless of the doctrines and philosophies which we may espouse. Concerning these you and I may disagree. But we can do so with respect and civility.”8

I had a colleague, now retired, with whom I had fundamental differences. In our department meetings and discussions about problem students, he would always stick up for the underdog. His emphasis was always on showing mercy. I, on the other hand, believe in “tough love.” From my perspective, it was better to flunk or dismiss students who were underperforming. We disagreed, but we had mutual respect for each other, and by openly sharing our views with civility, we were able to make decisions as a department that generally tempered justice with mercy.

Finally, we can develop the ability to learn from those who are different or with whom we disagree. We can teach students to be open to new ideas without feeling that their group identity is being threatened. I have a colleague who teaches an introductory sociology course to freshmen, and he finds that generally these students are socially and politically conservative. To encourage critical thinking, he starts the semester by telling students that his intention is not to change their view but to give them new or additional information. He asks them to be open and willing to evaluate their own conclusions in light of new information. They may still come to the same conclusions in the end, but they will have done so in the context of new information or after evaluating alternative perspectives. Such an approach encourages openness, but in a nonthreatening way.

To encourage tolerance, let us start with diversity in our own community—and let’s remember the “not-being-a-jerk-about-it part.” A Latin maxim quoted in the academic freedom statement says it best: “In essentials let there be unity; in non-essentials, liberty; and in all things, charity.”10

Renata Forste is Professor and Chair of the Department of Sociology at Brigham Young University. She received her PhD from the University of Chicago in 1992 and taught for three years at Western Washington University before joining the faculty of BYU in 1995. Previous to her appointment as department chair, she served as an associate dean in the College of Family, Home, and Social Sciences and as director of Latin American Studies. Her research focuses on patterns of family formation and child well-being in Latin America and the United States.

10. “Statement on Academic Freedom at BYU.” 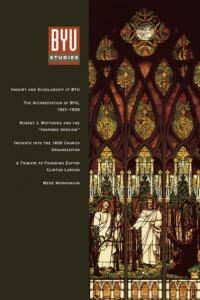 Previous:
Poetry, the Other, and BYU