Baptism in the Early Church

History, Theology, and Liturgy in the First Five Centuries

A Restoration emphasis on baptism has distinguished the teaching and practice of The Church of Jesus Christ of Latter-day Saints from 1829 to the present. In contrast to many Christian denominations, the Church does not condone infant baptism sprinkling, nor does it accept baptisms by other Christian groups that do not have the authority restored by John the Baptist to Joseph Smith and Oliver Cowdery. A further critical distinction is their insistence that baptismal ordinances are necessary for salvation. Nevertheless, Latter-day Saints are not completely alone in all their views; the Campbellite Churches of Christ also see themselves as a restoration of primitive Christianity, and they share some of the same concerns about the practice and significance of baptism. It should not come as a complete surprise, then, that the first comprehensive analysis of all biblical and early Christian literature relevant to baptism should be written by a scholar coming out of the Campbellite tradition.

This monumental work on early Christian baptism constitutes a worthy capstone for Everett Ferguson’s long career of exemplary research in early Christian sources. Educated at Abilene Christian University and Harvard University, Ferguson taught Greek and Bible courses at Abilene Christian University from 1962 until his recent retirement. While both Bible and theology studies at ACU are clearly focused on preparation for Christian missions and ministry (consistent with a Campbellite belief in the necessity of water baptism), Ferguson maintained a sturdy focus on his scholarly work in early Christian history, grounded principally in literary sources. He has been widely and consistently recognized by New Testament and early Christianity scholars for the quality of his contributions over his long career.

While there are other good books on Christian baptism, none has attempted the comprehensive approach that Ferguson presents in this volume. No doubt, Professor Ferguson was motivated to undertake this exhaustive survey of the available materials because of the continuing wars within the community of Christian scholars engaged in finding or denying early support for modern baptismal teachings and practices. The considerable growth in manuscript discoveries in the twentieth century provided additional impetus for his project. His experience as editor of The Encyclopedia of Early Christianity may well have helped him develop a thorough approach, in which he claims to have examined all known relevant texts for the first three Christian centuries and to have extensively sampled the much larger collection of writings from the fourth and fifth centuries.

The work begins with a tight, twenty-two-page survey of the literature that not only puts his own work in perspective but also puts all the ongoing questions about Christian baptism on the table, including questions concerning the necessity of baptism, infant baptism, immersion versus sprinkling, the meaning and symbolism of baptism, and the salvific effects of this Christian sacrament. Included in this survey is Ferguson’s own collection of early (second- and third-century) Christian statements relevant to baptism, complete with commentary and notes, which comprise thirty-five pages of his compilation entitled Early Christians Speak, the third edition of which was published in 1999 by ACU Press.

Ferguson’s findings are divided into seven parts, as follows:

Part 1, “Antecedents to Christian Baptism,” surveys purification washings in the Graeco-Roman world, examines linguistic roots and their varied usage in Jewish and pagan writings, reviews Jewish washings and baptismal movements, and finally focuses on John the Baptist and the meaning and manner of his baptism.

Part 2, “Baptism in the New Testament,” first examines the baptism of Jesus through scriptural and noncanonical accounts before considering later Christian interpretations through both texts and art. Part 2 then proceeds chapter by chapter and verse by verse through an orderly and thorough analysis of every New Testament text that can be seen as relevant to baptism. Ferguson’s mastery of New Testament Greek proves to be very helpful in adding depth to this section.

Part 3, “The Second Century,” begins with the Didache and Clement’s writings and then analyzes a host of pseudepigrapha and apocrypha, apologists, and heretics, ending with chapters on Irenaeus and Clement of Alexandria. The second century proves crucial for most of the conclusions Ferguson draws.

Part 4, “The Third Century to Nicaea (325),” covers the writings of a number of minor and major figures such as Hippolytus, Tertullian, Cyprian, and Origen, but also investigates the thematic literature that arose from controversies over infant baptism and rebaptism. A full chapter is dedicated to texts and practices in Syria, and another examines key sources at the turn to the fourth century, culminating in the section’s treatment of the Council of Nicaea.

Part 5, “The Fourth Century,” takes almost 240 pages to examine texts and developments from Egypt, Jerusalem, the Syriac writers, and the School of Antioch—including John Chrysostom, the three great Cappadocian theologians, and other writers in Northern Italy and Spain—among a number of other miscellaneous contributors. In addition, the writings generated by controversies over eunomian,1 sickbed, and infant baptisms are reviewed. In this section, Ferguson shifts from the comprehensive approach of the earlier sections to an approach based on a broad sampling of the voluminous materials available today.

Part 6, “The Fifth Century,” begins again in Egypt with Cyril and subsequent developments, including the Coptic rite. He then surveys contributions from writers whose names will be familiar only to true specialists. He concludes this section with two chapters on Augustine’s views and practices and his controversies with the Donatist and the Pelagian separatists. This section concludes with an approach based principally on literary sources.

Part 7, “Baptisteries,” gives Ferguson opportunity to explore the archaeological and artistic evidences that have survived from these early centuries. Some of these have been used extensively in modern debates, which made it important for Ferguson to give them his close attention.

Finally, in his fifty-fifth chapter, Professor Ferguson presents an organized statement of his conclusions on the major outstanding issues: Christian baptism originated with John, probably with some influence from Jewish washings but none from pagan purifications. Baptism was at that time universally viewed as necessary for new converts. With few exceptions, immersion was the standard for several centuries. Infant baptism was a late and generally controversial development. The baptismal ceremony itself evolved quickly, beginning with a simple immersion preceded by the administrator lifting a hand and invoking the Father, Son, and Holy Ghost. A laying on of hands soon became part of baptism, often conflated with an anointing. Undressing and redressing—later in white—was clearly involved in many geographic regions. Renunciations of the devil also became popular.

Interestingly, the meaning of baptism varies, even among the earliest sources. It can indicate remission of sins, taking Christ upon oneself, a contract with God, the death and resurrection of Christ (and of all mankind), membership in the Church, and many other things.

Those interested in sorting out and understanding all the developments in the history of early Christian baptism will benefit greatly from Ferguson’s book. It is a thorough and monumental work, one that deserves the attention of Christian traditions that no longer value baptism by immersion as a necessary expression of faith. 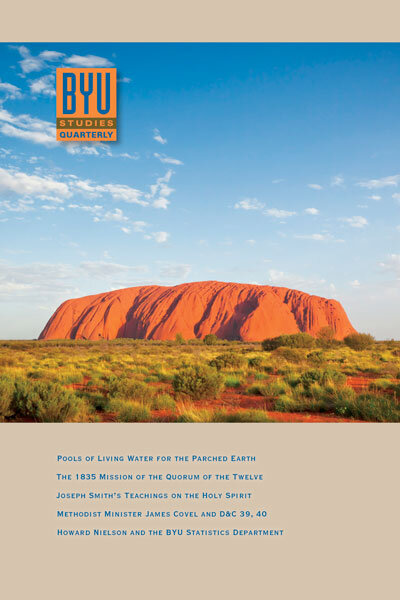 Previous:
The Introduction of Mormonism to Finnish Society, 1840–1900

Noel B. Reynolds is Professor Emeritus of Political Science at Brigham Young University. He received his PhD from Harvard University. His continuing academic interests focus on legal philosophy, early Christian theology and history, and the Book of Mormon.

1. Disciples of the neo-Arian Eunomius insisted that the Trinitarian formula in the baptismal rite did not imply the Nicene consubstantiality of the Father and the Son. They also rejected triple immersion in favor of a single submersion of the convert.