Boy on a Bus

The fragrance of some flowers is stronger after they have been crushed. It is very strong when the flowers are wild spring jonquils. The boy, about ten and fat, squeezed the half-dozen blooms in his tightly closed fist until petals, stems, and leaves were almost pulp. He tipped his head down and held the wilted plants to his nose while he sniffed long and loud, satisfying himself with the perfume. The odor was thick and sweet.

The woman beside me said, “My three boys are rowdy and wild. Sometimes I nearly go crazy with their noise. But when I see a child like that, I—” The bus jerked, slowed, and came to a station. “My stop,” said the woman; she staggered to the door of the lurching bus.

A group of gray uniformed youngsters stumbled over each other and onto the bus. There were no seats for them, so they stood and rocked back and forth, punching one another, giggling, “I say, stand up straight, can’t you? . . . Get off my toes and stand on your own jolly feet.” They did not speak to the child with the jonquils. He lifted his head once, but stared crookedly. He quickly hid his face again in the limp blossoms.

A woman with a black sealskin coat and white straw hat who sat by the child spoke softly to him. The boy, after long hesitancy, answered, “From America? No? Hungary?” The frumpish woman smiled and whispered in his ear. He rubbed the ear with his fist, and one which held the flowers, and guessed her homeland once more. “Switzerland?” He brushed his forehead with the sticky petals but kept his face to the floor. “Not France,” he was sure of that. “Not Germany. Scotland?” The Maori woman laughed hoarsely, said gutturally, “Ena hora, ta-ta now,” and waddled to the door marked “Exit.” She stepped down onto the first step, paused to attain balance, grasped one chrome bar with both hands, fell into the crowd awaiting to ascend, and after finally gaining her equilibrium walked with greatly agitated hips down the footpath.

The conductor leaned over the sinking head of the child. “Did you have a nice day at school?” he asked. The lad did not reply. Instead, he clenched his fingers tighter about the stems and ever so slightly shifted the white cane which was inches shorter than man-sized. He had been holding it with his left hand all the way from Queen Street to Remuera.

The children looked at the child, whose short dark gray pants would hardly button across his stomach, and drew away from him. For a moment they stopped laughing, but only for a moment; then with a punch or a shove each one began his let-loose-from-school tricks. The commotion lessened as, by ones, by twos, by threes, they alighted from the bus. They ran away whirling this way and that as the Auckland winds, blowing from both the Tasman Sea and the Pacific Ocean at the same time, spun the dry leaves in front of them.

The conductor bent down again. “Next corner is yours,” he said. The child cautiously moved his cane. The bus came to a standstill. The conductor raised the lad to his feet. There was confusion at the door as always at four-thirty in the afternoon with people rushing to and fro, getting on and off. The conductor guided the boy to the opening. A woman’s hand and arm pushed through the crowd at the door. Then her other arm and hand reached up the steps. She took the child and lifted him out the door, through the passengers, to the footpath. She was tall, not old. Her hair was blonde, natural. It hung to her shoulders, but it was not untidy.

“Mummy,” and the boy was smiling. “Mummy, I got some flowers for you. Mummy, they smell sweet.”

She neither smiled nor frowned, and she could not be heard as she took them from his sweaty fingers.

She had hold of his hand now. They were walking along the footpath. The bus started, and they were almost gone from view.

Suddenly I stopped craning and gazed straight ahead. My hands relaxed their grip on my bag. The bus turned a corner. But in the very moment before it did so, I had seen the tall woman and the overweight boy with the crooked eyes, skipping down the hill, her long hair blowing backwards, his short, white cane twirling in the air. The winds, because they came from the seas at the same time, had made the boy and the woman sway giddily, but the scent from the crushed flowers had steadied them, for I had heard them both—laughing. 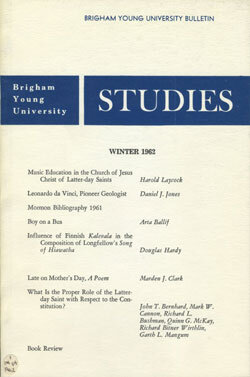 Next:
Influence of Finnish Kalevala in the Composition of Longfellow's Song of Hiawatha