The Story of Utah’s State Constitution

After years of neglect, state constitutional histories have undergone an upsurge of interest and study. Jean Bickmore White’s attractive but brief work, Charter for Statehood: The Story of Utah’s State Constitution is a part of this new genre. Since 1971, White has published at least four scholarly articles on statehood and the ratification of the state constitution in Utah. Research interest and academic training make her well qualified to provide a scholarly work based on detailed research.

As with other state constitutions, Utah’s document is not only a product of experiences it shared with other western territories, but also a product of its own unique culture, history, and philosophies. It was written at the end of a troubled territorial period that included religious conflict that had to be reconciled before Congress would grant statehood.

Utah’s long, difficult fight for statehood began in 1849 with the Constitution of the State of Deseret, modeled on the Iowa and Illinois State Constitutions (20–21). Instead of statehood, Utah was given territorial status, but this first constitution provided the basic framework for two later constitutions (1856 and 1862) drafted in the unsuccessful hopes of attaining statehood.

Utah’s desire for statehood was rejected partly because the predominate Mormon religion virtually governed the territory as a theocracy, causing disputes over separation of church and state. As Congress legislated to reform the Mormons, delegates in 1872 worked from the Nevada State Constitution to develop a new constitution much altered and expanded from the earlier efforts. In an attempt to bridge the mistrust between Mormons and non-Mormons on the polygamy issue, the 1872 constitution offered a compromise: Utah would embrace within its constitution conditions prescribed by Congress and ratified by a vote of the people. Congress remained unconvinced or cared little for the compromise. In response, a fifth constitutional draft was prepared in 1882. It also was based on the Nevada Constitution, but it clung fervently and defiantly to its political and economic policies and to plural marriage.

By 1887, Mormons were ready to invite non-Mormon participation in another try for statehood. When the invitation was spurned, the Mormon People’s Party proceeded with a convention whose memorial was the most subdued in tone to date, declaring polygamy a misdemeanor, consistent with the 1887 Supreme Court decision in Reynolds v. United States and forbidding union of church and state, or domination of the state by any church.

After the Manifesto of 1890 came careful observation to determine conformity before Congress passed an Enabling Act in 1894, which included requirements for a perpetual public school system free from sectarian control and guaranteed perfect toleration of religious freedom. At last the convention that convened to write a state constitution in March 1895 had the approval of Congress. The document that was produced, like other state constitutions, was a product of its time. It reflected the need of an agrarian-based economy in a semiarid, capital-starved western territory to industrialize, but without submitting to corporate or trust control. It also attempted to bridge territorial issues.

The 107 delegates who wrote the Utah Constitution came from a broad range of ages, religious affiliations, and economic interests. Several were experienced in governmental affairs. They avoided experimentation, sticking to safe language and articles borrowed liberally from other states such as New York, Washington, California, and Wyoming. The result was a patchwork of delicate compromises on many issues: it included women’s suffrage (the most hotly debated issue of the convention) and contained provisions restricting taxation and debt and controlling costs, but left the delicate matter of liquor manufacturing to future legislatures.

Utah’s Constitution is a typical late-nineteenth-century document that placed Utah squarely in the mainstream of American states. Many issues of personal rights, church and state, and religious freedom were adopted to convince the nation that Utah had become like other states in political and economic affairs. Over the century since statehood, Utahns have found it appropriate, as circumstances changed, to amend their constitution eighty-four times.

White’s book is readable, logical, convincing and leads to worthwhile understandings. The biographical sketches of delegates found in the appendix is valuable despite a few factual errors, such as erroneously crediting Lycurgus Johnson with coming to Utah in 1846 (112) and mistakenly stating that William B. Preston, who was born in 1830, was Presiding Bishop of the LDS Church from 1844 to 1908 (117); these minor errors do not materially detract from the contributions this book makes in detailing Utah’s interesting constitutional history. 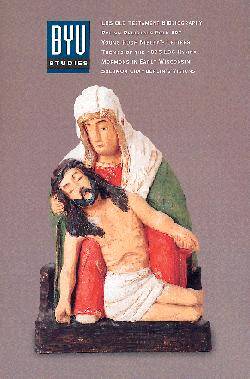 Previous:
The Large, the Small, and the Human Mind

Next:
A Peculiar Treasure

Wayne K. Hinton is Chair of the Department of Social Science at Southern Utah University.