Creating an image that represents the quest for good government was a meaty challenge. There are so many opinions, so many priorities, so many personalities. How do power, choice, cooperation, force, fear, aspirations, and even geography impact how a society will structure itself and relate to others whose priorities vary?

Compiling a journal of essays on “what makes for a good government” is an analytic, orderly business of clarity, reason, and articulate supporting arguments. It was a great workout for my left brain. Putting that vast concept into something visual, intuitive, suggestive, and subjective is the muscular territory of the right brain. I unleashed mine and had a lively romp.

As a visual artist, I work in many media—painting, drawing, printmaking, photography, collage, and more. Much of my time during the pandemic involved fabric—making hundreds of face masks and dozens of quilts. It was soul-soothing for me. During the long quarantine, I became familiar with the wonderful resource for textile artists called Spoonflower.com. It is a company that provides designs by gifted artists that can be printed on demand onto a variety of fabrics.

I made searches on Spoonflower.com using headers that visually depicted some aspect of government (like maps, declarations, flags, justice, peace, war, conflict, leaders, power, boundaries, and more). My plan then was to cut them into squares, arrange them, and sew them into a quilt.

Then I fell off an e-bike and broke my right wrist. (My dominant hand still can’t quite maneuver the complex device called scissors.) This is where my “ministering sisters” came to my rescue. Before long they had all the fabric cut into tidy squares for me. Temporarily unable to use a sewing machine, I would have to glue the squares down rather than sew them together. My husband bought me a large piece of foam core and drew a pencil grid on it for me to place the fabrics just so. I went to work because they had gone to work on my behalf. It was a group effort.

I spent several days arranging and rearranging the fabrics. Primarily I wanted a dark/light/dark/light pattern in diagonals, regardless of what the images on those fabrics were. When I had a pattern that pleased me visually, I was delighted with jarring juxtapositions. The peace dove right next to military insignia and bombs? Crowns and armor of the ancient realms near the flags of modern nations? Maps abutting hearts to represent all the skin tones of the world? How does this assemblage not just burst into flames from all the contrasts and conflicts?

It does not catch fire because it—symbolically at least—is “bound” by all human hearts dedicated to the hard work and necessary wrestles of what John Lewis referred to as “Good Trouble. Necessary Trouble.”

And lest we imagine that the “trouble” we go through to make government good will end up being tidy and orderly, there is the image on the back cover. It is a reminder. This is a work in progress. It is “All hands on deck!” It is constant and ongoing. All the scraps, disarray, and chaos can only succeed if there is an undercurrent of love, cooperation, commitment, and hard work woven into the ongoing process.

Below is a list of the Spoonflower designers I included in making this art: 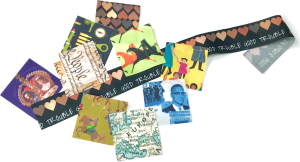