Director’s Foreword to “The Mantle of the Prophet”

Because it presents, in exceptionally imaginative and mature language, an event of genuine significance, The Mantle of the Prophet is a provocative, exciting poetry drama. Not only does it illumine a seldom-dramatized segment of critical Mormon history, it does so in a way that the audience will feel deeply and think carefully about what it sees and hears. This mental and emotional involvement thus requires the spectator to review the controversy, and to make a personal, not merely a traditional, decision about its merits. Soon, it is hoped, the spectator brings his immediate spiritual convictions into harmony with that decision, and stands firm as one convinced by experience rather than precept only. This conviction cannot always be had simply by studying the objective facts of history. The function of the drama, which The Mantle of the Prophet fulfills so well, is to give flesh and especially blood—vividness, humanness—to an action. The function of the drama’s director is, midwife-like, to see that this illuminating poetic creation is brought to dynamic life on the stage.

From my, a director’s, viewpoint, The Mantle of the Prophet, like every ambitious drama, has unique problems—problems which frequently derive from the play’s most distinctive merits. This drama is unlike the usual twentieth-century play; it aims to present, rather than represent, the characters and action which it depicts. The characters here are generally types, composites of historically accurate attitudes and convictions, and the language they use is exquisitely organized, sublime in its elegance and purity. What is said, and how it is said, seems infinitely more important than who says it. Sometimes, for example, certain characters are not even identified by name for the audience.

This presentational characteristic suggests to me that the “poem” can be presented formally, in concert style, with costumes of evening dress for the actors. But concert reading frequently becomes so stilted and pretentious that I decided to stage the play, exploiting its presentational quality whenever impressed to do so. This decision permitted me more strongly to appeal to the audience’s sense of vision, so that its ear could be disciplined and made to comprehend what the playwright intended.

The unusually lengthy speeches, for instance, obviously require much stage movement to obviate the monotony engendered by a single voice. The designer, Mr. Charles Henson, created the setting, shown on the accompanying drawing, with its low, wide platforms, for the specific purpose of promoting much movement by the actors. With its single dominant elevation it also provides areas for strong emphasis and interesting picturization.

This is a “space setting,” a permanent structure which becomes any place at any time. The audience discovers the scene’s locale from the actor’s dialogue. But in this play locale is not important. The idealized events occur in an idealized region, whether it is described as a living room, a chapel, or somewhere in the Milky Way. In what room did the Council in Heaven take place, or the agony of Job, or the conversion of Hyrum Smith? This quality of timelessness was enhanced by painting the setting marine blue, splattered with yellow, magenta, and grey.

The lighting, in pools of blue, magenta, and chocolate, was heavily shadowed, and created memorable moments of emphasis and especially mood. At the end of the play, a special light was directed to two white copies of the Bible and the Book of Mormon which were left on the stage by Sidney Rigdon. Colored photographs of modern art, chosen to represent the emotions of dominant characters, were projected on a screen at the rear of the stage.

Symphonic mood music was used repeatedly. I considered for some time the use of L.D.S. hymns, but rejected this thought because it seemed to suggest more typical approaches to Church drama, and The Mantle of the Prophet is unique. At the end of Act I cricket sounds were used to develop the evening mood, and thunder effects were used sparingly when referred to in the script.

Following the original concept of ideal presentation, rather than literal representation, the male actors wore black trousers and nineteenth-century-style shirts with full, romantic sleeves. For Act III, the General Conference, the men wore vests to suggest the new mood. The women wore rich, Victorian-period, full-length dresses, all in harmonizing shades of maroon and lavender. Straight make-up was applied—no character make-up, no age effects, no beards.

The Mantle of the Prophet was produced for the first time anywhere on July 19–23, 1960, in 250 Arts Building, Brigham Young University. The following cast and technical staff participated in this production. 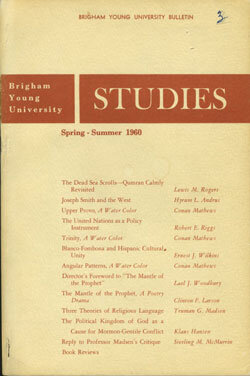 BYU Studies Quarterly 02:2
Next:
The Mantle of the Prophet