A Conversation about Poetry

Dr. Edward L. Hart, a Mormon poet whose style is both classic and contemporary, lives in Utah. During the following interview, Dr. Hart, now in his 80s, apologized for not speaking as fast as he used to; but had he spoken any faster, I would have missed even more of the rich fluency of his thought. As I spoke with him, I wished I could just listen and not write down what he said, but I realized that would be selfish. I hope you will enjoy this interview and reprints of his poems in this and future issues.

CM: You write poems which are explicitly religious, one of which is sung all over the Church: “Our Savior’s Love.” Talk to me about the relationship between poetry and praise, poetry and witness, and about yourself as a “Mormon poet.”

EH: Well . . . that’s the most difficult question of all questions—I think the things one feels most deeply about become the things one writes about. So I suppose it’s inevitable that since I do feel deeply about my religion that I should write about it.

My view of religion and Mormonism is that it embraces all truth so that even if its subject isn’t explicitly religious, any great poem—in that broad sense—is a religious poem. And that’s my justification for writing what some people might call secular poems—like about nature. The religion embraces nature, embraces everything. The heavens do declare the glory of God so that if you write about the beauties and glories of nature in a sense you are praising God, who is the author of the beauty and the grandeur.

CM: Tell me more about the composition of “Our Savior’s Love.”

EH: The form represents the three members of the Godhead: the first stanza is to the Savior, the second stanza deals with the Holy Ghost, and the third stanza praises God the Father.

In writing the lines “Our Father, God / Of all creation, hear us pray / In rev’rence, awed / By thy Son’s sacrifice,” I wanted to create a rhyme worthy of the Father. I can’t have just any word rhyme with “God.” I suppose it was inspiration that the word “awed” finally occurred to me; it maintains the dignity of the audacity of rhyming anything with “God.” I don’t think there’s any other word in the language that would have sufficient power to be in that place. Rhymes call attention to themselves just by being rhymes, so it’s important that the rhyming words mean something.

I wanted to make the poem upbeat—not in any way depressing. It’s not a coincidence that the final word of the poem is “rejoice.”

CM: It shows there’s so much more to a poem than what people automatically see.

EH: I am in deep humility every time I hear “Our Savior’s Love” because I feel it is something beyond me.

CM: Here’s another question. You lived in Pakistan in 1973 and 1974. Like Utah, that country has awesome mountain landscapes. How would you compare the feeling of the Pakistani terrain to Utah’s?

EH: In Utah, I plowed land that had never been plowed before—truly virgin soil. But in Pakistan, you can’t go anywhere but you feel the presence of the past—hundreds of generations back to the beginning of history. The Indus Valley, for instance, was one of the places where civilization began. So it’s very old. I’ve collected artifacts that go back hundreds—if not thousands—of years.

You can go to high places in Utah and get the feeling they’re fresh from the hand of the Creator. I remember one time I’ve never forgotten from early days in Idaho: seeing a cirque with a lake at the bottom of it and mists blowing across—it looked like it had just been created.

The landscape has been very important to me, both as a person and as a poet. I have lived other places from time to time—and always when I’ve lived there, I’ve missed the mountains and have had a pull to come back.

CM: Your poems “Holiday,” “The Coward,” and “Processional” deal with men and arms—guns and hunts, guns and war. You are someone who lived through World War II and subsequent conflicts. You also live where the deer hunt is an annual event. Tell me more about your feelings about men and arms.

EH: To tell the truth, I’ve never been on a hunt for deer or anything else. I have always admired the grace and the beauty of wild animals like deer, and it’s never entered my mind to kill them. I did see them fairly frequently when my brother and I spent a summer camping and plowing on a dry farm; it was a nightly occurrence to see wildlife like deer or coyotes silhouetted on the skyline. We felt like we were just part of the whole natural habitat. We had guns with us that we could use for protection if necessary, but we never tried to shoot a deer or coyote. I recognize that my view of hunters in “Processional”1 might not be fair. I know so many hunters that I admire, but still their way is not my way, and I can’t help feeling the way I do.

CM: What about war?

EH: Of course, the war affected me very closely. I was all set to go to Oxford in the fall of 1939, and then on September first, Hitler invaded Poland, and the war in Europe began. The Rhodes Scholarships were suspended, and it was seven years before I was able to go. So I hold a personal grudge against Hitler.

As far as the war poems are concerned, I’ll have to confess I wasn’t close to any actual fighting. So poems like “The Coward” are pure imagination because of the impact the war was having on me and on my imagination.

CM: Were you drafted? Or did you enlist?

EH: I didn’t get drafted; I enlisted in the navy. I did Japanese language training. My main job throughout the war was working with Japanese naval codes. After they had been broken out by the cryptographers, the job I shared with other translators was that of translating the messages into English.

CM: Talk to me about your influences. You are obviously influenced by Wordsworth, say in your poem “Insulations (against Intimations of Mortality).” Additionally, we see another Romantic, Blake, in “A Lesson in History,” where you turn his phrase “Heaven in a Wild Flower” to “heaven in a potato.”

EH: I had read Wordsworth of course and thought more highly of him in my youth than later. I became an eighteenth-century scholar—and I believed that education should increase the area of one’s appreciation and not decrease it—but as my appreciation for the English Classical period increased, I started to look more askance at the Romantics. . . .

I read some of Ghiselin’s poetry that had just been published. The language, the diction, the rhythms opened a whole new world for me. Everything I’d written before then seemed childish, puerile. I went home and wrote what I thought was my first mature poem: “Morning.” Without knowing it, I sort of invented a new stanzaic form. Ghiselin discovered that I repeated it exactly in the second stanza, but the third stanza was a little different. After my teacher pointed out the form to me, I rewrote that stanza to conform to the other two. I hadn’t been aware consciously that there was any stanza form at all.

CM: Let’s look at a specific poem: “On Listening to Jorge Luis Borges.”2 Tell me the history of that poem. Did you meet Borges? Wherein does Borges’s power lie for you?

EH: Borges was at BYU, and he had an interpreter with him, but he really didn’t need it. It amazed me that a person of foreign background could see so clearly into the heart of English poetry, of literature. What it revealed to me was that there’s a truth about being human and that he had reached that and made it manifest to us. It didn’t matter that he was from Argentina—he could have been from Timbuktu or anywhere else. The truths he revealed were the depths of the human heart. That’s what impressed me about him.

He had sensitivity for language as well as for people—he made such an impression. It was forceful and magnetic.

CM: Language and form—the intrinsic power of the word and the delight in craft—are essential to creating good poetry. What does language mean to you? What are the tricks and limitations of language? Of form?

EH: The word trick is too mechanical; it goes deeper than that. You roll words around on your tongue and taste them and feel them—each one has a special life of its own. In great poetry, not a word can be changed, because each is exactly right. Science’s truths have always been revised, from Newton to Einstein. But nobody finds a better way to say things than the way Shakespeare says them.

The feel for human truths goes hand in hand with the language and all that the words suggest, their history. The whole working together conveys a truth that was always known but comes with a shock of recognition, because we hadn’t been aware that we knew it.

I can’t imagine a poem existing without form—to me it isn’t a poem unless it has form. I think form becomes part of the meaning. Form and content are inextricably connected. 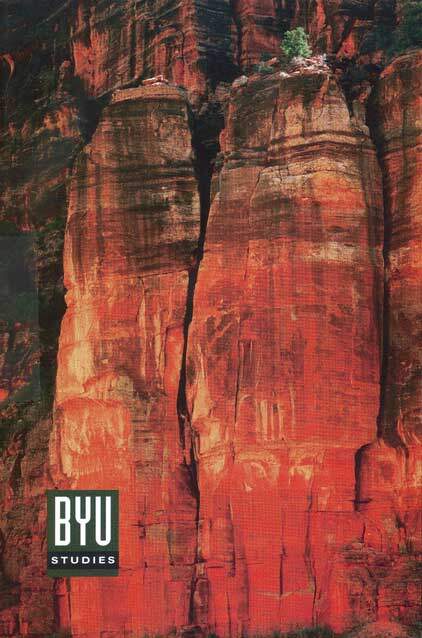 Edward L. Hart received a B.S. in economics from the University of Utah in 1939 and an M.A. in English at the University of Michigan in 1941. He went on to receive a D.Phil. from Oxford in 1951. A well-known Mormon poet, Dr. Hart wrote the text for the popular hymn “Our Savior’s Love.” He received a Presidential Citation from Brigham Young University in 1998.