In a world threatened with drowning under a flood of printed matter, Professor Madsen’s book shines forth in clear contrast to the usual run-of-the-press. It is terse, laconic—sometimes painfully so; more often it is exciting in bare allusion to profound principle (e.g., p. 26). But its brevity and terseness do not prevent it from containing more ideas in total than most tomes many times it length (80 pages). The real strength of this work, however, lies in the quality of the ideas contained therein.

With the skill that reflects a lifetime of careful thinking and with materials patiently gathered both from the vast literature of the world and from the revelation of the prophets of the latter days, Professor Madsen weaves a fabric that wears well. His pattern is of contrast, highlighting the rich hues of gospel truth in a setting of the somber questions which have pervasively plagued mankind in recorded thought. The form of his cloth is a garment for man, to cover man’s intellectual embarrassment about his own being.

Specifically attentive to the problems of personal identity, the parentage of mankind, the mind-body problem, the challenge of evil, the nature of human freedom, and the knowing of important things, we are treated to the provocative insights of the Prophet Joseph Smith. The dilemmas, paradoxes, and frustrated attempts of such thinkers as Aquinas, Kierkegaard, Marcel, Bultmann, and Tillich are parried deftly with simple and powerful strokes as the restored gospel is displayed as the avenue of truth and happiness for all men.

The reader should not expect in this treatise a systematic work either of philosophy or of theology. The intent of the author seems to be rather to speak to his topics as soul-problems that beset each human being. These problems are met, however, on a high intellectual level and are couched in terminology that makes clear the relationship between the kinds of questions the thinkers of the world are asking and the answers provided by the prophets.

To one not of the same religious persuasion as Professor Madsen, his work offers a clear, incisive examination of the heart of “Mormonism.” To such it is a plain challenge to make a choice, seeing here the intellectual strength of the religion of Jesus Christ, but being warned that the intellectual side is neither final nor consummate. But to those of like persuasion, this work is as a catalogue and reminder of riches possessed, though perhaps neglected; of strengths familiar, but possibly unused. They will likely want to review the writings of Joseph Smith with new thirst, and even to seek after the same source as did the Prophet. Perhaps the creation of such a desire would be the greatest compliment the author of Eternal Man could receive. 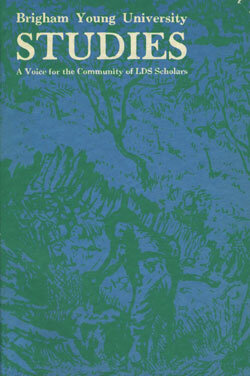 Previous:
Who's Who in the Book of Mormon (revised ed.)