From Prophet to Son

Advice of Joseph F. Smith to His Missionary Sons

After examining From Prophet to Son, my first impression was to give a copy to my son who is a prospective missionary and to mail another copy to another son already on a mission in Tahiti. The message of this book is quite as much directed to today’s missionaries as it was to the missionary sons of Joseph F. Smith near the turn of the century.

From Prophet to Son consists of carefully selected extracts from hundreds of letters Joseph F. Smith wrote to his twelve sons as they served as missionaries for The Church of Jesus Christ of Latter-day Saints. Following the introduction which contains a summary of the missionary experiences of Joseph F. Smith, the letter extracts are arranged chronologically as they were written to each of the twelve sons. Each extract is preceded by a subject heading and a short paragraph which summarizes its contents and circumstances. For example, the letter to Hyrum M., dated 31 July 1896, bears the heading: “Confidence and Courtesy.” The lead paragraph tells of an encounter between Hyrum and a Methodist minister. In the extract from the letter Hyrum is advised on how to handle such situations and is told “objectionable facts should always be clothed in as mild and unobjectionable language as possible” (p. 45).

It is energy which has developed greatness in men, more than natural talent. (P. 32)

We must always remember that we are not laboring for the applause of men. (P. 67)

Experience is better possessed than to be gained. I.e., it is like the hurt of a bruise. It feels better after it quits hurting. (P. 81)

Do not permit yourself to be drawn into any manner of extreme. (P. 90)

President Joseph F. Smith is regarded by some as one of the seminal minds of Mormon theology, having defined some of the major areas of twentieth-century LDS theology. The letters in this book provide some glimpses of the strength and range of his mind, especially pertaining to theological matters. Some of the doctrinal subjects contained in his letters include Jesus Christ, the spirit world, guardian angels, the Holy Ghost, free agency, the Book of Mormon, Satan, the sacrament, death, seeking the Spirit, sacrifice, tithing, and the power of the gospel. The scope of this review will permit only two examples of his theological insights:

No man can aim higher than to seek to possess himself of the characteristics of Jesus of Nazareth. He was and is the grandest type of Man-hood who was ever clothed in flesh and blood on this earth. The man who succeeds in reaching nearest to his attributes and perfection will get nearest to God! (Pp. 35–36)

You ask, Can a man do any wrong without first being tempted of Satan? All men have their agency, the spirit of Satan leads to error and darkness and wrong doing. If a man does wrong, it is because he yields to the spirit of evil, thereby exercising his agency. If he does good, it is in accordance with the spirit that is of God, and he uses his agency in that as well. (P. 70)

The letters exchanged by Joseph F. Smith and his sons are also a window through which we may catch a glimpse of missionary work at the turn of the century. From them it is apparent that Latter-day Saint missionaries, especially in England, were subject to persecution, generally in the form of harassment in street meetings, opposition from clergymen of other faiths, and the circulation of malicious tumors about polygamy. When his missionary sons suffered from homesickness, Joseph F. Smith reminded them of President Heber J. Grant’s words: “Work, work, work!” In those days missionaries assumed leadership roles in mission branches and conferences (districts); consequently, they spent much of their time in administrative roles, rather than in preaching the gospel. Another interesting practice consisted of passing out tracts to people on the streets, often without disclosing the missionaries’ identity as elders of The Church of Jesus Christ of Latter-day Saints. President Smith cautioned his sons against spending too much time sightseeing, having fun, and playing jokes—often reminding them of the seriousness of their calling.

It is regrettable that the scope of the book is not broader. That this work is limited to his letters to his missionary sons seriously limits the reader’s insight into the mind of Joseph F. Smith.

While the volume is basically attractive and appealing, there are some weaknesses in format. It would be much easier for the reader to see where the explanatory paragraph preceding each extract ends and where the extract itself begins if they were in different type styles or if one were in italics. Also related to format is the matter of providing only extracts of the letters rather than the entire letter. For the serious student, the complete document would be infinitely more desirable and useful. Yet, on balance, Smith and Kenney have produced a worthwhile book that is at once attractive, readable, and informative. 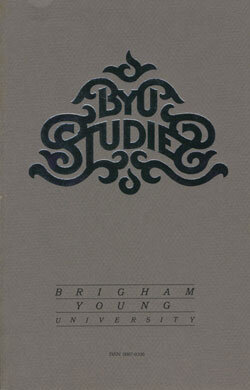 Previous:
The Canyons of Grace