The year 2017 promises to be a very exciting year for readers of BYU Studies Quarterly. With many challenges as well as positive developments happening around the world, we expect that our readers are on the constant lookout for solid information and commendable perspectives. The carefully written and rigorously peer-reviewed pages of this journal continue to offer new insights into old problems and to bring old wisdom to bear on new issues. With this in mind, my thoughts returned to the frequently cited section 88 of the Doctrine and Covenants.

In December 1832, Joseph Smith and the Saints in the fledgling Church were faced with great perplexities shortly after Andrew Jackson had been elected to his second term as president of the United States. Among those perplexities were social and economic upheavals that would culminate in the Civil War, as Joseph prophesied on December 25, 1832 (see D&C 87). Not to be discouraged or dissuaded, Joseph revealed only two days later, on December 27, 1832, one of his most impressive and valuable revelations (see D&C 88). Offered to the Saints as an “olive leaf . . . plucked from the Tree of Paradise,” this profound instruction was offered as “the Lord’s message of peace to us” (introduction to D&C 88).

Section 88, which was deemed so important that it was printed, ahead of its chronological order, as Section VII in the first edition of the Doctrine and Covenants in 1835, orients the faithful spiritually, educationally, ontologically, politically, eschatologically, ecclesiastically, organizationally, and covenantally. In a time such as ours, readers can confidently return to it to find refreshment. It is from this section that the motto “by study and also by faith,” often used at Brigham Young University, is to be found (88:118). It is here that we are exhorted to learn “of things both in heaven and in the earth, and under the earth; things which have been, things which are, things which must shortly come to pass; things which are at home, things which are abroad; the wars and perplexities of the nations, and the judgments which are on the land; and a knowledge also of countries and of kingdoms” (88:79). It is here that we are encouraged to teach one another diligently, and God’s grace shall attend us, that we “may be instructed more perfectly in theory, in principle, in doctrine, in the law of the gospel, and all things that pertain unto the kingdom of God, that are expedient for [us] to understand” (88:78).

I am excited to see in this issue of BYU Studies Quarterly articles, essays, reviews, and speeches that serve this same wide array of lofty purposes with probing depth and eloquence.

The two pieces here by Bruce C. Hafen go hand in hand with each other. His review essay of the biography of Truman G. Madsen and his foreword to the book Learning in the Light: Selected Talks at BYU by John S. Tanner are masterful reflections on the mission of Brigham Young University, building upon the precepts of D&C 88.

Margaret Barker’s lecture on theosis, with three illustrious responses, brings together the principles and powers of holiness, wisdom, cove­nant, and loving-kindness that unite as one “things both in heaven and in the earth” (88:79).

Steven Olsen’s careful and expansive reading of the key biblical account of the prophet Samuel in 1 Samuel 1–3 shows how God works with and through his prophets “to preserve his ancient covenant with Israel, even at inopportune times and through obscure persons.”

Frederick Williams evaluates nine accounts of a significant visitation of the Savior during the dedication of the Kirtland Temple in 1836, all of which he finds, with one late exception, to be remarkably consistent.

Book reviews—of the essential documentary history of the first fifty years of the Relief Society, of the importance of the presidential election of 1844, of an Oxford publication on Catholics and Mormons, of essays on Mormon theology and other topics—help to discern wisdom “out of the best books” (88:118).

And Reid Neilson and Scott Marianno tell the heart-rending stories of several deaths among early LDS missionaries and their children in Samoa and their burial in a small LDS cemetery at Fagali’i. The missionaries’ consecrated sacrifices have sanctified that ground out of which their lost loved ones may “come forth, for their graves shall be opened; and they also shall be caught up to meet him in the midst of the pillar of heaven—They are Christ’s, the first fruits” (88:97–98).

May Palm Sunday, the painting on the cover of this issue of BYU Studies Quarterly, by the recently deceased BYU artist Robert Marshall, draw all these things together, on earth and in heaven, in remembrance of Christ’s glory, death, redemption and resurrection, “through him that quickeneth all things” (88:14, 17). 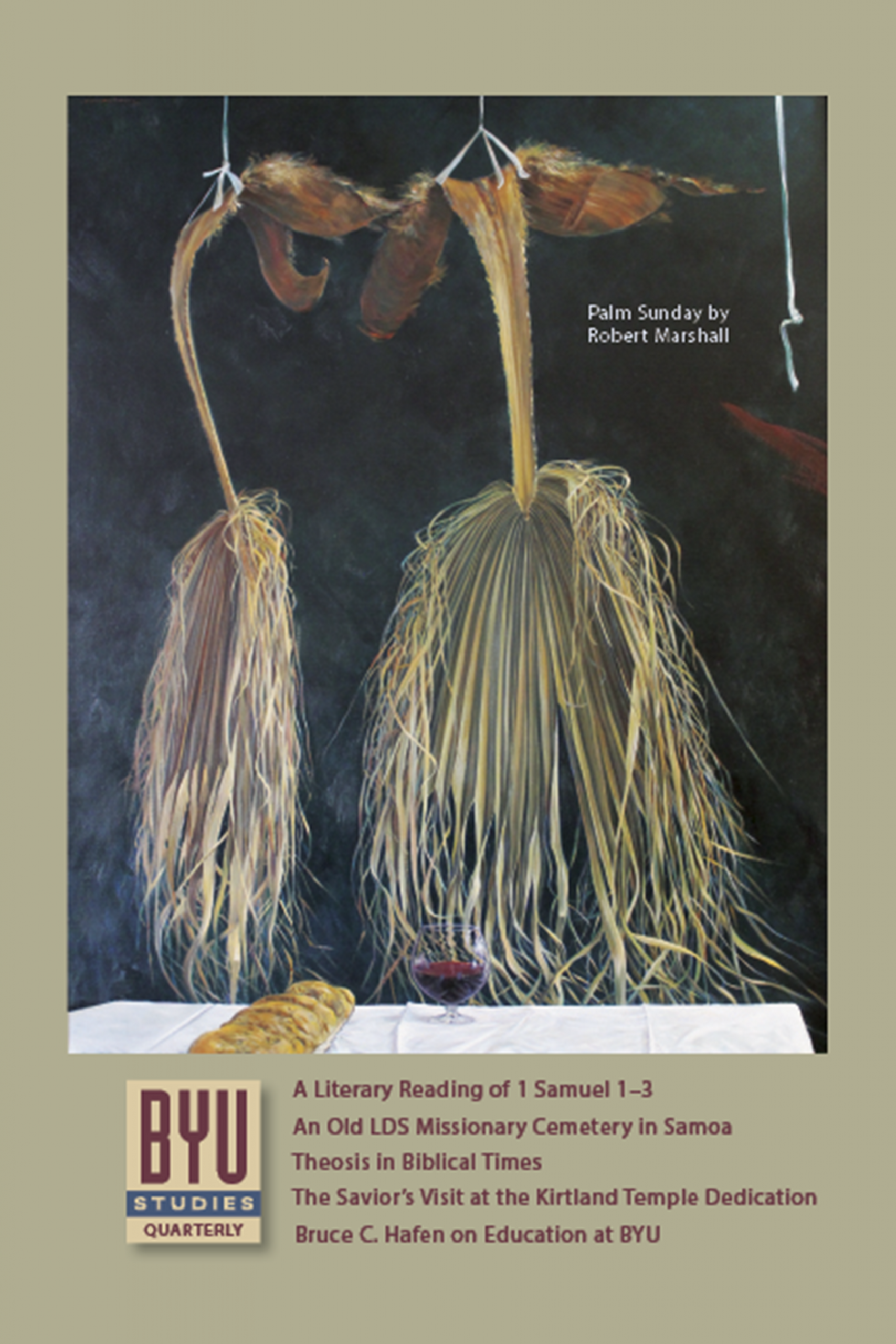 BYU Studies Quarterly 56:1
Next:
Birth and Calling of the Prophet Samuel