God, Man, and the Universe

God, Man and the Universe is the title of the first of a four-volume series to be known as Foundations of the Millennial Kingdom of Christ. At present it is the only volume from the press, although the other volumes are in process. They are to be titled: volume two, The Gospel of Jesus Christ; volume three, The Kingdom of God; and volume four, Latter-day Prophecy.

All who have attempted to write a serious book will immediately recognize that a four-volume work of the scope and span encompassed in these titles is ambitious to say the least. But Dr. Andrus seems equal to the task. As an avid researcher and gatherer of information, he has been lecturing and writing about Joseph Smith and the restoration of the gospel for many years. Many who have attended his lectures (this reviewer among them) have been impressed with the great array of facts, figures, and ideas he has accumulated, analyzed, organized, categorized, and systemized. Not only does he have extensive information at his command, but he manifests a keen insight and remarkable ability to interpret what he reads and to find meaning and significance in many areas that have been somewhat passed over by others.

Dr. Andrus has marshaled a great amount of information about the Prophet Joseph, his teachings, and little-known events in Church history. Much of it has come from the private journals of early members of the Church who knew “Brother Joseph” personally. In the preface to God, Man and the Universe, Dr. Andrus explains that he has endeavored “to analyze the total spectrum of thought expressed by Joseph Smith. A study [that] has never before been undertaken . . .” He continues, “In this work it is my endeavor to present Joseph Smith’s thought in the depth and breadth that evidence makes possible.” He also cautions the reader that “where conclusive evidence is lacking” he has “indicated this fact by qualifying [his] conclusions on the subject.” He further states that he alone is “responsible for the views expressed” and “for the conclusions that have been drawn from the sources quoted.”

One of the areas in which Dr. Andrus makes his most positive contributions is in matters of Church history. These are also the topics about which there will probably be the least amount of controversy among his readers. The book offers an excellent discussion of events associated with Joseph Smith’s First Vision. Of considerable interest are the many quotations from nineteenth century authors about the 1819–1820 religious revivals in the Manchester-Palmyra-Vienna region of New York State. Especially significant is the portrayal of the prominent role of the Methodists in this revivalistic spirit (pp. 38–48).

The book likewise treats the visits and teachings of the Angel Moroni and the subsequent translation of the Book of Mormon with considerable skill and a richness of supplementary material. The Oliver Cowdery letters, first published in the Messenger and Advocate, and which Dr. Andrus uses as a supplementary source, provide a fulness to the message of Moroni that sharpens our perspective of the purpose of Moroni’s frequent visits to the Prophet (quoted frequently in chapters 3 and 4).

Dr. Andrus’ discussion of the sequence and dates of the translation of the various parts of the Book of Mormon is enlightening. By combining historical evidence with textual content, he concludes that the Small Plates of Nephi, although constituting the first six books of the printed Book of Mormon, were in reality the last to be translated (see pages 89–90).

Thus Dr. Andrus’ acquaintance with the early publications of the Church, the private journals of early members, and the writings of many not of the Church but contemporary with the early events enriches his presentation and illustrates an awareness of historical issues currently being discussed in relation to the first scenes in Church history.

But Dr. Andrus is not content simply to recount history. His stated goal is to “analyze the total spectrum” of Joseph Smith’s thought. As must inevitably be the case when one undertakes to explain and elucidate in “depth and breadth” on religious topics, especially topics that extend into the almost incomprehensible reaches embodied in themes concerning God and man and the universe, there will be readers who will not agree with what is said. This is largely because a treatise of this nature goes beyond mere fundamentals. And because it goes beyond fundamentals, it deals with a number of items which, although intensely interesting, are in a category about which very little has been revealed. Consequently, whether or not Dr. Andrus’ particular understanding of these is entirely correct cannot always be determined. Generally his discussions and conclusions appear reasonable and may be correct, but judgment may best be suspended until further information and Revelation are available.

Topics most likely to be contested are those like the origin and condition of “intelligences” and the extent of their independence and cognitive powers (pp. 170–77). Likewise, the discussion of the “Light of Christ,” the “Glory of God,” and the “Divine Spectrum” described in chapter ten may have its proponents and opponents, particularly where matters such as (1) the degrees of light, (2) the organization of light in the cosmos, and (3) instinct, reason and comprehension are concerned. It is not the existence of these as much as an explanation and description of their function that invites debate. Rather fine lines are drawn around some elusive subjects. Another topic unique with Dr. Andrus (at least unique in the emphasis that he places upon its importance) is an analysis of “the seven days of creation” and the order of events therein, discussed in chapters twelve and thirteen. That the order of events presented in the several accounts of the creation varies is obvious. What the final answer is, particularly as to the day man was placed on the earth, is not that obvious.

Every author and every man must be permitted his share of mistakes. When dealing with the wide spectrum of philosophically oriented items entertained in God, Man and the Universe, the chances for error and for difference of opinion are very great. Since only the Presiding High Priest of the Church has ultimate divine authority to interpret the word of the Lord and to pronounce Church doctrine and philosophy (a fact that Dr. Andrus would be among the first to admit), we could not hold God, Man and the Universe as the final word. However, it is this reviewer’s estimate that if we could follow the counsel of Paul to “prove all things” we would probably find Dr. Andrus’ percentage for accuracy is rather high. Unfortunately, some of the items in his discussion do not admit of “proof” at the present time for want of sufficient information.

All who are seriously interested in the restored gospel and the divinely appointed mission of Joseph Smith will want to examine Dr. Andrus’ work. It is a book that cannot be ignored since it calls many things to our attention and offers a great many plausible, if not final, explanations. It will be the source of much thought and discussion. 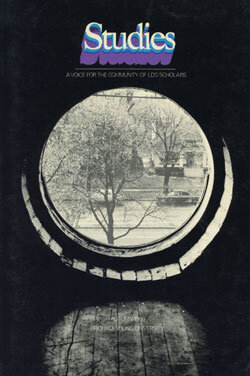 Previous:
The Saga of the Book of Abraham