No more significant and informative book on Mormon and Utah history has been produced in the last decade than Great Basin Kingdom. As a storehouse of facts and insights in which layman and scholar alike find fascinating shopping, it has already established its right to a place on the bookshelf of every serious devotee of the historical subject matter with which it deals.

Professor Arrington, a member of the Department of Economics at the Utah State University, has obviously lived with his research for most of his adult life. The annotated bibliography and chapter notes which occupy almost twenty per cent of the volume (pp. 415–515) will prompt generations of seminar students to rise up and call the author blessed because of the clues for further investigation which abound in it. Despite the bulk and inconvenient location of the notes, no reader is well advised to ignore them, for they contain important supplementary information and many intriguing quotations from contemporary sermons and documents. Example, from the recollections of Robert Gardner, Jr., on the early days of the Dixie Cotton Mission:

. . . we had a good time for we was united in everything we went at in these days we had no rich nor poor our tents and wagons and what was in them was about all we had, and we had all things common in those days and very common too especially in the eating line for we did not even have sargom [sorghum molasses] (p. 476, note 95).

Great Basin Kingdom is the story of the effort of the Latter-day Saints to build a self-sufficient, Church-directed economy in the West and of the ultimate abandonment of that effort. It is an economic history, not of a region or a political unit, but of a religious community, and except for a brief introduction it is confined to the period between the arrival of the Mormon pioneers in the Salt Lake Valley and the end of the nineteenth century.

A short first section, “Design for the Kingdom (1830–1846),” concerns economic aspects of the Latter-day Saint experience prior to the move westward. Arrington’s insistence that the basic ideas which Brigham Young sought to apply in the Great Basin were developed during the period of Joseph Smith’s leadership is adequately supported, and the list of these basic principles is a good one (pp. 24–28).

The larger second section, “Building the Kingdom (1847–1868),” introduces a thesis to which Arrington recurs from time to time:

It may yet be conceded that the well-publicized conflicts and differences between the Mormons and other Westerners and Americans were not so much a matter of plural marriage and other reprehensible peculiarities and superstitions as of the conflicting economic patterns of two generations of Americans, one of which was fashioned after the communitarian concepts of the age of Jackson, and the other of which was shaped by the dream of bonanza and the individualistic sentiments of the age of laissez-faire. (p. 63; also pp. 130, 410–411.)

This reviewer, who confesses a political and social bias in the matter, does not find the thesis convincingly demonstrated. For one thing, the Mormon-Gentile conflict began in the middle of the Jacksonian era and had only a brief lull after 1847. Further, there is too much of laissez-faire in Brigham Young himself to make him fit the role of protagonist of a consistently collectivist ideology; indeed, some of his utterances on public education and programs for the poor read like Social Darwinism and the Gospel of Wealth. There is also lack of evidence that the American business community took a directing part in the anti-Mormon campaign of the late nineteenth century. Why should it? The L.D.S. communitarian program sought only to conserve and produce resources for Kingdom-building; even in its most successful period it did not exclude capitalism from the Great Basin in the form of transportation, communication, finance, commerce and mining. Economic friction was often present, but hardly decisive.

Even so, this section is a tremendous revelation of the variety of economic ideas, techniques, and undertakings by which the Mormons sought to build a self-contained society in the pre-railroad era. Many readers will encounter here for the first time the public works program of the 1850s and 1860s, which employed as many as 2,000 men on Church projects like the Salt Lake Temple, the Social Hall, the Endowment House, and a wall around Salt Lake City. Tithing—mostly in labor and in kind—is shown to be a major source of capital for necessary projects. The versatility of the ecclesiastical “call” is attested by George Goddard’s “rag mission” to collect materials for the Church paper mill (p. 115) and by this letter, written after the completion of the Salt Lake Theater: “Dear Brother and Sister Colebrook: Would you allow your daughter Nellie to act upon the stage. It would very much please me. Your Brother, Brigham Young” (p. 213).

Part three, “The Kingdom Threatened (1869–1884),” deals with the rather desperate efforts to maintain the ideal of self-sufficiency after the coming of the railroad. Z.C.M.I., the School of the Prophets, the Church-sponsored railroads, and the United Order revival of the early 1870s are parts of the story. One marvels at the capacity of the Utah pioneers to produce the wherewithal for iron foundries, cotton mills, sugar factories, telegraph lines, immigrant-aid companies and diverse other enterprises, few of which became capital producers in their own right. The reader of Arrington’s account is likely to be more impressed by the effort that went into these projects than by their successful outcome. Their most important long-range legacy was probably a brotherhood made stronger by shared exertions.

A final section, “Kingdom in Retreat (1885–1900),” describes briefly but persuasively the transformation in L.D.S. economic policy which followed the disastrous impact of the Edmunds and Edmunds-Tucker Acts. Some Mormon readers may find Arrington’s phrase “the great capitulation” a bit harsh (p. 409), but there is no escaping the fact that by 1900 the effort to maintain a material Kingdom of economically independent, agriculturally-oriented communities to which all converts were admonished to gather, had been abandoned. The Church had made peace with the world, and to some extent at least on the world’s terms. This is a neglected period in Mormon history, and Arrington provides some challenging leads for future research.

The book is attractively printed. Alas, it is also expensive. The collection of pictures which follow page 412 is a valuable as well as interesting feature. Errors of detail are rare. The map on page 85 shows all the northeast corner of the original Utah Territory being detached in 1868; actually the portion east of 110° was transferred to Nebraska Territory in 1861.

In the judgment of this reviewer, Professor Arrington’s most valuable contribution to the field of Mormon history, in Great Basin Kingdom and many articles based on the same investigations, is the demonstration that this subject can be handled according to sound criteria of objective scholarship. Other writers of the present generation have shown the same capacity, but none to a greater degree. Future seminar students who turn to Arrington’s notes for research clues will be well advised also to read these lines from his preface:

Finally, a word to Mormon readers who will be troubled about my naturalistic treatment of certain historic themes sacred to the memories of the Latter-day Saints. The church holds, of course, that it is based on divine revelation. The body of revealed knowledge, however, at least to the Latter-day Saint, is not static, but constantly changing and expanding. Revelation is continuous and expedient—“suited to the people and the times.” Moreover, it is impossible to separate revelation from the conditions under which it is received: “We have this treasure in earthen vessels.” Or, as Brigham Young expressed it, “the revelations which I receive are all upon natural principles.” The true essence of God’s revealed will, if such it be, cannot be apprehended without an understanding of the conditions surrounding the prophetic vision, and the symbolism and verbiage in which it is couched. Surely God does not reveal His will except to those prepared, by intellectual and social experience and by spiritual insight and imagination, to grasp and convey it. A naturalistic discussion of “the people and the times” and of the mind and experience of Latter-day prophets is therefore a perfectly valid aspect of religious history, and, indeed, makes more plausible the truths they attempted to convey. While the discussion of naturalistic causes of revelation does not preclude its claim to be revealed or inspired of God, in practice it is difficult, if not impossible, to distinguish what is objectively “revealed” from what is subjectively “contributed” by those receiving the revelation. (p. ix)

Without assigning to Providence any specific responsibilities in connection with what transpired, and with full allowance for the projects which failed and the abandonment of the self-sufficiency goal, Arrington finds in the story told in Great Basin Kingdom a substantial and impressive Mormon contribution to the development of the American West. For bringing to light many time-obscured facets of that story, he deserves much thanks. 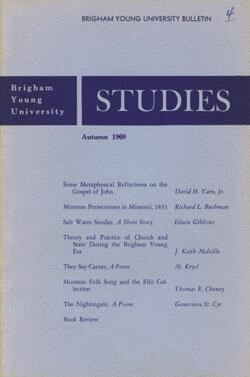