Nauvoo today is a city of ghosts. On serene river-bottom flatlands and atop the gentle bluffs, restored and re-created homes and shops and halls intermix with historical markers and a temple replica to tell visitors that here once stood a vigorous river city. Volunteer guides seek to inform the curious about the sites and people of Old Nauvoo. Stately visitors centers operated by both The Church of Jesus Christ of Latter-day Saints and the Reorganized Church of Jesus Christ of Latter Day Saints use hosts and media to explain Nauvoo’s origin, demise, and modern restoration. Yet, despite presentations and films, a walk through Nauvoo haunts the visitor’s sense of time and place, causing reflection about God and his kingdom and humanity. For those with a sense of Nauvoo’s history and religious significance, it produces reverence, worship, and wonder. Nauvoo resides as much in the visitor’s mind and feelings as it does in sights or sounds. “Nauvoo of the Imagination” is the way one historian describes this phenomenon.1

Because it carries strong, relevant meaning and even nostalgia for LDS and RLDS members, Nauvoo has received an abundance of scholarly attention. Bibliographic essays list scores of solid studies that have appeared as theses, articles, or books.2 Thematic compilations in such publications as BYU Studies, Dialogue, the Journal of Mormon History, and the Ensign have presented rich offerings about many aspects of Old Nauvoo.3

Nauvoo’s story contains recognizable basics. Some are well known by now and others need more research and understanding. The Nauvoo Temple, Nauvoo Legion, Nauvoo Charter, days of sickness and healing, the apostolic mission to England, plural marriage, the founding of the Relief Society, Council of Fifty, the Martyrdom, the succession crisis, and the exodus—all basics of the history of Nauvoo—have been studied in detail and are common components of books and lectures regarding Nauvoo’s intriguing past. Despite Nauvoo’s lengthy bibliography, much about the past remains to be found and told, especially in the realm of responsible social history.4 Nauvoo’s 150th birthday provided scholars with an opportunity to disclose new research, try some new thinking, and produce new publications placing Nauvoo in historical perspective.

In 1988 Brigham Young University formed a steering committee to plan the celebration of the 150th anniversary of the founding of Nauvoo. This committee brainstormed the question of not just one year’s commemoration but a celebration that would extend from 1989 to 1996 to correspond with the seven-year period of Nauvoo’s existence.5 One priority event would be a scholarly symposium to be held on campus in 1989. Calls for papers brought good responses. Three dozen papers were selected, sessions created, and chairpersons and commentators recruited.

Meanwhile, The Church of Jesus Christ of Latter-day Saints was also planning for the commemoration of Nauvoo’s sesquicentennial. Its committee felt that Brigham Young University’s effort should become part of a spectrum of activities that would include Church-sponsored projects in Nauvoo and Carthage. So a history symposium was planned, cosponsored by the Church and BYU’s administration; the College of Family, Home, and Social Sciences; the College of Religious Education; the Department of History; the Joseph Fielding Smith Institute for Church History; and the Department of Church History and Doctrine. President Gordon B. Hinckley of the First Presidency and Elder Loren C. Dunn of the First Quorum of the Seventy (then serving as president of the North America Central Area and president of Nauvoo Restoration Inc.) were invited to address the symposium.

On September 21, 1989, BYU hosted a one-day symposium of Nauvoo history, which drew nearly one thousand attenders. All major essays selected for inclusion in this issue were symposium papers except that of Dennis Rowley, which was solicited because of its unique content.

We open this special double issue with President Gordon B. Hinckley’s eloquent tribute to Nauvoo, which he delivered at the symposium’s banquet.

The purposes and functions of historic sites are themes next examined in two essays that focus on how and why Nauvoo has been restored. Elder Loren Dunn discusses and illustrates recent LDS restoration projects. Kenneth E. Stobaugh, former director of RLDS Sites in Nauvoo, explains RLDS restoration efforts on the Joseph Smith Historic Center properties in Nauvoo, including the Smith homes.

Then Larry C. Porter and Milton V. Backman of BYU’s Department of Church History and Doctrine look anew at Joseph Smith’s contributions in Nauvoo as teacher and theologian. They examine several of the Prophet’s distinct teachings unfolded in Nauvoo and show how these were part of a comprehensive, harmonious theology centering on the temple.

Providing a view of Joseph Smith’s labors and insights into Nauvoo’s religious and political affairs is Bruce Van Orden’s biographical look at W. W. Phelps. Van Orden, a member of BYU’s Department of Church History and Doctrine, focuses on Phelps’s labors as one of Joseph Smith’s main clerks in Nauvoo.

Next we examine the local activities of Nauvoo priesthood bearers and quorums. William G. Hartley, research historian at BYU’s Smith Institute for Church History, gives attention to the beginnings of wards as basic local Church units and to the Nauvoo Stake, its bishops, and its quorums and their members. He shows which priesthood practices were continuations from the past and which were innovations of long-term significance.

Nauvoo attracted many curious visitors. William Mulder, highly regarded professor emeritus of English at the University of Utah, presents a broad selection of observations, pro and con, which travelers in the last century recorded about Nauvoo during and after their visits.

Several LDS settlements and clusters of Saints, like spokes radiating out from the hub of a wheel, sprang up beyond Nauvoo. Dennis Rowley, an archivist at BYU’s Harold B. Lee Library, gives an in-depth history of LDS timber harvesting and milling in the Wisconsin pineries between 1841 and 1845, an enterprise that fed enough lumber to Nauvoo to build today more than 200 three-bedroom houses. He explains finances, equipment, food and clothing needs, communal living arrangements, personalities, and results.

Susan Sessions Rugh, a Ph.D. candidate at the University of Chicago, looks at another of these settlements—Ramus, or Macedonia—located southeast of Nauvoo near Carthage. Ramus (Macedonia) was the site of an early stake of the Church, often visited by Joseph, Hyrum, and members of the Twelve. There Joseph gave important explanations about the book of Revelation and other doctrines. The Prophet considered Ramus the “first spoke” in a Church property distribution system with Nauvoo as its hub, and its members made significant contributions toward the construction of the Nauvoo Temple. Rugh shows how this community grew to more than four hundred Saints built up around the Joel Hills Johnson and Ute Perkins families. She follows its deteriorating relationship with neighboring non-LDS Fountain Green until Macedonia’s demise in 1846.

One of the Saints living in Ramus was Benjamin F. Johnson, about whom E. Dale LeBaron of BYU’s Department of Church History and Doctrine writes. During visits to Macedonia, the Prophet Joseph usually stayed with Brother Johnson, a close friend and confidant and one of the earliest to whom Joseph Smith explained the doctrine of plural marriage and eternal increase.

Turning in another direction, Kenneth W. Godfrey, director of the Institute of Religion at Utah State University, looks at that underside of Nauvoo associated with crime and punishment. He identifies stereotypes that have claimed that the Church fostered criminal activities, and he seeks to show the realities of law and order in that place and time. Finally, Marshall Hamilton takes Hancock County as his lens for viewing local lawlessness and civility. He examines Mormon and anti-Mormon interactions and counter-actions that took place after the Martyrdom up to the Saints’ forced departure from Nauvoo.

Our Nauvoo studies conclude with two methodological discussions showing problems we face when properly identifying photographs and visual records and when mapping Nauvoo. Orem, Utah, attorney T. Jeffery Cottle and Richard Neitzel Holzapfel of the LDS Institute of Religion at the University of California at Irvine analyze what survives of photographs and other visual records of Nauvoo. They explain how difficult it is to verify the accuracy of some traditional identifications of visuals, many of which they found to be mislabeled. This paper was drawn in part from a larger study that has since appeared as Old Mormon Nauvoo, 1839–1846: Historic Photographs and Guide.6 Then, we present the readers with a carefully created map of Nauvoo in 1844–46, which is accompanied by BYU graduate student MeLínda Evans Jeffress’s brief discussion about discrepancies and site location problems which have plagued recent maps of Old Nauvoo.

Ronald W. Walker, senior research historian at the Smith Institute for Church History at BYU, provides the concluding essay. As a fitting Historians’ Corner document, he offers us an edited and documented text of Mother Lucy Mack Smith’s general conference talk in the Nauvoo Temple on October 8, 1845.

Like mosaic pieces, these essays provide new details and color that sharpen and enrich our perceptions of Old Nauvoo. The Saints’ once-bustling city had a vital impact on the course of LDS and RLDS history far disproportionate to its short seven-year life span. That is why believers in the gospel of Jesus Christ restored by Joseph Smith have given to Nauvoo’s sesquicentennial celebration major attention and reverence. Old Nauvoo overwhelmingly haunts Restored Nauvoo, so much so that historians, descendants of Saints who once lived there, converts to the faith Joseph Smith promulgated, and curious travelers feel attracted, charmed, inspired, and puzzled by Nauvoo’s intense history. Collective memory, history writing, nostalgia, and restoration projects insure that Nauvoo, once deserted by its persecuted builders, will continue to be a place of reflection and introspection, as well as the subject of research, writing, and works of art for decades to come. 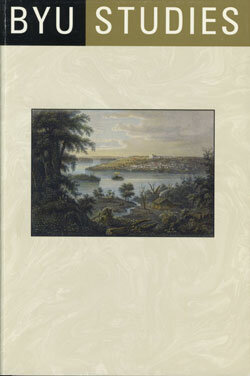 BYU Studies Quarterly 32:1-2
Next:
Nauvoo—Sunrise and Sunset on the Mississippi