It has been thought that you might like to have the following notes relating to my grandfather, Egbert B. Grandin, who printed in 1830 the first edition of the Mormon Bible. These items were told to me by my mother, Harriet Grandin Allen, many years ago.
The Mormons tried to get their Bible printed in Rochester, but no one wanted to undertake the work. My grandfather at first refused; after consulting friends who felt that it was merely a business matter and that he would be in no way related to the religion, he consented. The type was set for several pages at a time and the Mormons brought the manuscript in lots each day, taking the manuscript sections away the same day. . . . My grandfather received his pay, $3,000 worth in a farm and part of another farm, or a mortgage on the latter, both near Palmyra. . . . The printing was done on what is known as a Washington press. The writer saw this in the Mormon Museum in Salt Lake City. For decades it had lain neglected in the cellar of a store of Pliny Sexton’s, I suppose on Main Street. The hand work on the old style press must have been arduous, no power presses then.1

As the above paragraph shows, even the 1830 printer was less than receptive to the publication of the Book of Mormon, and not at all receptive to the book itself. Many still seriously doubt that the Book is what it purports to be: a sacred history. But there can now be no doubt that it has a history. And that means a series of unexpected turnabouts for its critics.

The critics expected the Book to be a non-Christian threat to “the faith once delivered to the saints.” Again and again it has, instead, pulled men and women toward that faith, illustrating and then enacting it.

The critics called it the “Gold Bible,” the “Mormon Bible” and assumed it would replace the Bible. But historically it has been a major force in pulling more than three million persons toward understanding and respect for the Bible.

The critics expected it to be exposed as a forgery or a plagiarized rehash of Spaulding, Rigdon, Ethan Smith, or available Indian lore. But, quite by itself, the Book has remained the single, tangible artifact that renders these alternative “explanations” untenable.

Finally, the critics expected it to be a bubble for back-woodsmen, and none hesitated to predict the collapse of its influence in the nineteenth century. But, strangely, whatever may be its relevance to the arguments of that time and place, it has an almost pre-established harmony with the needs of the twentieth. And, as trends continue, it may be even more relevant to the twenty-first.

With confidence, then, we can predict an increasing willingness to read the Book with diminished hostility, and with a concert to “fairly test it.”

That means that the story of its origin needs to be kept straight, its documented elements separated from mere say and hearsay. It is important that the story of the origin of the Book of Mormon also be translated correctly. And that is what a team of research scholars have been about this year.

Where were the Smiths living at the time of the Moroni visits? Russell R. Rich has given us a framework for confidence. What about Joseph Smith’s reputation in Palmyra at the time of translation? Richard Lloyd Anderson takes what may well be the first thorough look at the Hurlbut hurlings and offers a detailed historiographer’s appraisal. What of the Anthon Transcript story? Stanley B. Kimball has pursued with discipline and patience the main characters in the incident, and given us a platform from which to acknowledge what we can and cannot reliably say. What about the original Book of Mormon manuscript? Dean C. Jessee offers a most fascinating article on the fragments that are preserved. What of the impact of the Book on the New York community? Leonard Arrington, Larry Porter, Laurence Yorgason, and Jeffrey Holland offer further glimpses into that.

Throughout our research, we have felt a lasting debt to the Book’s detractors. For through the campaign of disparagement they have left, as it were, literary fingerprints which provide dates, places, circumstances, and a close look at what was being claimed and counter-claimed. Taken together, they will continue to undercut the notion that the Book was “done in a corner.”

While we have encountered many dead ends, we have nevertheless opened some territory that promises further data. We commend these topics to the initiative of New York-minded Mormon historians:

1. The Prophet’s silver-mining efforts for Stoal (Stowell) and their relationship to the plethora of money-digging accounts.

2. The legal trials of Joseph Smith in the New York period.

4. The coherence of Joseph Smith’s own account of the translation with his closest scribes’—his wife Emma, and Oliver Cowdery.

In addition we are aware of four hearsay traditions, the sources of which cannot now be located, and we invite informed comment from our readers:

1. A paragraph, presently unlocated, in the papers of Joseph Knight, Senior describing the return of Joseph and Emma from the Hill Cumorah with the plates and the Urim and Thummim.

2. A statement (remembered but not identified by Dr. T. Edgar Lyon) that, in the process of translation, the Prophet became more and more familiar with the language until, at the end, he no longer utilized the Urim and Thummim.

3. A statement that Joseph, anticipating publication of the Book, cried out, “O, Lord, what will the world say?” and was somehow reassured that mind-opening evidence would be forthcoming.

4. A report that not long after reading the Book, Parley P. Pratt was assigned by the Prophet to re-read the entire Bible for parallels and corroborations. When he submitted his notes, Joseph was noticeably astonished at the number.

Any information leading to the arrest and conviction of these references, or any reasonable facsimile, will be most welcome. Here, then, are some accumulated findings of another year’s research into Mormon origins. 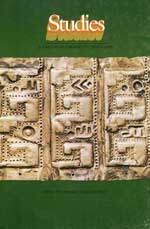 Next:
Where Were the Moroni Visits?

Dr. Madsen, professor of philosophy at Brigham Young University, is director of the Institute of Mormon Studies. He has lectured and published widely in the history and philosophy of religion.

1. Excerpts from a letter from Henry Allen addressed to “The Librarian of the Palmyra Library” and recently recovered by Larry C. Porter.