This publication boldly sets forth a nontraditional view of the origins and unfolding of the priesthood during the early years of Church history. The volume is the second in a series of monographs published by the Independence Press for the John Whitmer Association. Prince, a medical doctor, accumulated over ten thousand pages of sources from Joseph Smith’s era, which he entered into a computer database. The result is a volume that will, no doubt, cause some readers to reevaluate several aspects of this significant subject. The monograph is now part of a larger book on priesthood during the lifetime of Joseph Smith.1

Prince divides the development of the priesthood into five phases. He calls phase one, from September 1823 to March 1829, a period of “Implicit Authority.” These were the years the Prophet was tutored by the Angel Moroni, the guardian of the gold plates of the Book of Mormon. Prince advocates nothing particularly unconventional in his discussion of this era. During this time, “Joseph Smith acted in his unique position by virtue of his relationship with Moroni, rather than formal ordination” (78); “his authority to act in God’s name, however, was implicit rather than explicit” (16).

Prince entitles phase two, from April 1829 to October 1830, a period of “Angelic Authority.” Here the author begins to depart from conventional paths and with each successive phase, he encounters problems with interpretation and documentation. According to Prince, the authority of God was indeed restored by angels, but the term priesthood was not used to refer to either level of that authority (except in the Book of Mormon) until 1831. He further asserts that the angels who restored the authority in 1829 were not named until 1835. A review of the available sources seems to substantiate his claims. Prior to 1831, the written record is void of the word priesthood in connection with the restoration of authority. Likewise, the names of John the Baptist and Peter, James, and John do not appear prior to 1835 in the accessible accounts of the restoration of the priesthood. However, wisdom dictates that one should be cautious in perpetuating these conclusions, since lack of evidence in written documents does not prove that something never happened. The accumulation of related documents for the period in question may be incomplete.

Another of Prince’s revisionist views is the idea that “twelve apostles may have been selected as early as 1830” (30). This would place the selection date of the Twelve approximately five years prior to the traditional date of February 14, 1835. However, the author overemphasizes some questionable and rather obscure sources as his basis for this position. First, he cites an itinerant preacher named David Marks, who stayed with the Whitmer family on March 29, 1830. Marks quoted the Whitmers as saying that “twelve apostles were to be appointed, who would soon confirm their mission by miracles” (30). Of course, David Whitmer, as one of the Three Witnesses to the Book of Mormon, was called as early as June 1829 to “search out the Twelve” (D&C 18:37). He and his family would be understandably excited to talk about this possibility to the Reverend Marks in early 1830. However, just because Marks writes about the idea in his memoirs in 1830 does not necessarily mean that the Twelve were actually named or called that year. While David Whitmer, Oliver Cowdery, and Martin Harris did indeed seek out the original members of the Quorum of the Twelve, the organization and calling of the Quorum did not take place until 1835.

Prince also quotes an article in the Cleveland Herald, dated November 25, 1830, reporting that leaders of the Church had “sent out twelve Apostles to promulgate its doctrines” (30). I believe Prince interprets the term “twelve Apostles” in this quote too literally. Is it not more likely that this non-Mormon periodical mistakenly used the term “twelve Apostles” when it would have been more appropriate to use a phrase such as “several disciples” or “a group of missionaries”?

Nevertheless, Prince attempts to identify the names of men who were referred to as Apostles prior to 1835. He uses good sources to show that five men—Joseph Smith, Oliver Cowdery, David Whitmer, John Whitmer, and Orson Pratt—were referred to as Apostles prior to 1835. This fact is not new. For example, we know that the Doctrine and Covenants calls Oliver Cowdery and David Whitmer Apostles as early as 1829 (D&C 18:9). However, Prince’s effort to ascribe the pre-1835 apostolic title to Peter Whitmer, Ziba Peterson, and Samuel Smith seems speculative.

The implication seems to be that if Prince can find pre-1835 documents that use the title Apostle for early Church leaders, these leaders must have belonged to a pre-1835 Quorum of the Twelve Apostles. Joseph Fielding Smith addressed this issue sixty years ago: “Men have been called apostles who have been sent forth with the gospel message even when they have not been ordained to that particular office.” Elder Smith continues, “The seventies of the Church are at times referred to as the seventy apostles. . . . In like manner the Lord spoke of the brethren who were ordained high priests in 1831.” Elder Smith then quotes Doctrine and Covenants 84:62–63, which states, “You are mine apostles, even God’s high priests.” He also asserts, “This revelation was given two years and four months before the first men were ordained to the special calling as apostles in the Church, but as they were commissioned to go forth proclaiming the gospel as witnesses for Christ, he designated them as his apostles.”2 The following statement by Wilford Woodruff is a good example of the general use of the title Apostle in the early years of the Church: “Let the Twelve Apostles, and the Seventy Apostles, and High Priest Apostles, and all other Apostles rise up and keep pace with the work of the Lord God, for we have no time to sleep.”3

Prince names phase three of his book “High Priesthood.” This phase covers the period from December 1830 to November 1831. Here, he maintains that in June 1831 men were ordained to a new “Order of Melchizedek” or “High Priesthood,” but that “it was not the office of high priest” (38; italics in original). However, William G. Hartley has noted that William E. McLellin’s missionary journals challenge this claim. McLellin, a close observer of early Church leaders, noted on October 25, 1831, that “a number of Elders were ordained to the High-Priesthood of the Holy order of God among whom though I felt unworthy I was ordained and took upon me the high responsibility of that office.”4 McLellin uses the word office.5

Hartley’s article questions still another of Prince’s claims. In the discussion on organizational development found in the section Prince entitles “Phase IV: November 1831 to March 1836—Organizational Development,” he asserts that prior to “mid-1832 the only use of the word ‘priesthood’ had been in conjunction with ‘high priesthood’” (51). Yet Hartley points out that McLellin’s journal contradicts that claim. As early as October 25, 1831, McLellin wrote, “A number of others present were ordained to the lesser Priest-Hood.”6

Turning to phase five, “April 1836 to April 1844—Elijah and the Fulness of Priesthood,” Prince maintains that in 1836 the roles of John the Baptist and Peter, James, and John “in the Restoration began to be eclipsed by the Old Testament prophet, Elijah” (81), eventually becoming “completely overshadowed” by him (14). He further states that “after 1840 [Joseph] Smith never associated John the Baptist or Peter, James, and John with the concept of priesthood” (14). It would seem that Doctrine and Covenants 128 contradicts this position. In this epistle, dated September 6, 1842, the Prophet gives a brief recitation of many key heavenly messengers that were involved with important events of the Restoration. In verses 20 and 21, he writes about Peter, James, and John, along with many others, but he never mentions Elijah. The revelation also states that these messengers, including Peter, James, and John, declared “their rights, their keys, their honors, their majesty and glory, and the power of their priesthood” (128:21).

As I attempt to assess the value of this monograph, I must admit that I have mixed feelings. On the one hand, I acknowledge that through countless hours of research Prince has found and made available to us many sources that have not been widely used before. On the other hand, I am uncomfortable with the fact that he bases many of his conclusions on the assumption that the lack of evidence in recorded documents proves that something never happened. He leaves himself vulnerable when evidence that refutes his claims is later discovered. Such is the case with the McLellin journals and the use of the term lesser priesthood. Prince has helped me understand that the term Apostle was often used in a general way in the early days of the Church. Yet I am not persuaded his sources prove the existence of twelve specific Apostles or a Quorum of Twelve Apostles prior to 1835. Consequently, I recommend the book as worthy of study, with the understanding that some of its conclusions are subject to question. 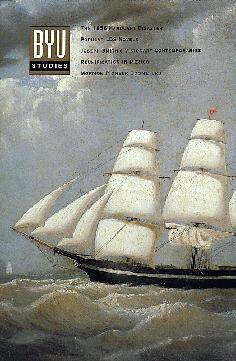 BYU Studies Quarterly 37:1
Next:
Power from On High