Health and Medicine among the Latter-day Saints

This volume is one of a dozen in a series which “explores the ways in which major religions relate to the questions of human well-being” (ii). Some of the other volumes have treated health and medicine in the context of the Lutheran, Catholic, Christian Science, Hindu, and Islamic faiths.

In his helpful foreword, Martin E. Marty notes that these books aim to “inform the rest of us about neighbors, fellow citizens, people who care about care and who would cure and be cured—while pursuing ways which set them apart” (x–xi). Aimed mainly at professional care givers, the books also give lay people a new view of their religious traditions by analyzing a crucial aspect of their belief and practice. Each volume is organized around ten themes, including death, suffering, healing, madness, sexuality, morality, and dignity (xiii), although Bush has packaged the themes in a unique way to present the Mormon case with greatest clarity and power.

Marty considers Bush, a physician, to be “one of those rare individuals who is equally at home in the ‘health/medicine’ and ‘faith’ aspects” (xi) of his religion. Latter-day Saint readers will recognize Bush as the author of important publications on the history of LDS ideas and behavior in the areas of race and evolution. This book is another important contribution to Mormon history. I also consider it to be one of only a handful of penetrating anthropological treatments of the Mormons. (Douglas J. Davies’s Mormon Spirituality: Latter Day Saints in Wales and Zion1 is another, also by an acute observer who is not a professional anthropologist, but is a professor of religion with a strong interest in anthropology.)

As Marty points out, Bush sets out not to analyze or explain the Mormons to his readers, but to sketch their “integral character,” “that which provides vision and wholeness to those who share” Mormonism (viii). In doing so, he uses many expressions drawn directly from the culture—exactly what an anthropologist would do in attempting to depict the “elaborate and intricate array of nuances” (ix) needed to represent his subject sensitively and respectfully. Marty observes, “Whoever is having a first encounter with Mormonism will already [in the chapter on the first theme] recognize how intact, apparently enclosed, and inaccessible that faith may be to others” (ix). He adds,

It becomes clear almost at once that Mormons are not merely a church. They are a people. They own identifying symbols and follow practices that put greater distance between them and ‘mainstream’ Christians than the distance between one and another of almost any of these Christian groups. (ix)

Not only is the non-Mormon well instructed here about much in Mormonism, but Bush’s presentation also succeeds—though not painlessly—in telling “the Saints about how and why they got where they are” (xi).

One of the strongest features of Bush’s work is his use of sources not accessible to many, if any, other Latter-day Saints (he credits friend Gregory Prince for his “remarkable private library” [xv]). In addition to the Church General Handbook of Instructions in its many variations over the years, he draws on hundreds of circular letters issued by the First Presidency, as well as much private correspondence between them and inquirers. He points out that

for almost a half-century, in fact, the most complete and accurate current statement of LDS beliefs has been the [First] Presidency’s file of privately answered letters. Carefully indexed to insure consistency over time, these private statements not infrequently have provided the text for statements formally published several years later. (202)

While readers may wish for more source listings on particular topics, I know of no other two-hundred-page book that is so widely and fully documented with obscure but appropriate material as this one.

To show how topics are handled, I summarize the handling of chapter 6, “On Sexuality and Birth.” It is introduced as tracing,

Varied counsel and commentary are cited from Church leaders, both early and late, which will surprise and enlighten nearly all readers. The seven-and-one-half pages on abortion trace in fascinating detail little-noted nuances in the evolving language of policy on the subject; the same is true of the almost eight pages on “marital sexuality and birth control.” Of course most, but not all, systematic statements on these practices have been issued in the last few decades. Nevertheless, few Mormons, even physicians, will have more than limited knowledge of the long-term process of development of LDS thought and policy on any of the subjects that Bush adroitly lays out.

The picture that emerges has significance beyond the health and medical area. It becomes, in Bush’s view, a paradigm for how the Church handles change in other matters: “The LDS record [on policies regarding sexuality] is notable for the insight it affords into the gestation and progress of Mormon doctrine, at least within the modern church” (178). The author usually does not attempt to shock us with any sort of exposé of these changes. Instead, he shows that where counsel on the health and medical issues has been modified, even where “core beliefs” have altered,

this [change] generally reflects an accommodation to new knowledge simply unreconcilable with the previous view. This development does not pose as much a challenge to church authority as might be supposed. It is in fact a tenet of the Mormon faith that this sort of refinement [continuing revelation] periodically will take place. (203)

A uniquely valuable contribution which Bush provides to help us understand this history is his demonstration that “despite the homogeneous stereotype many hold of the Mormons, a significant spectrum of views exists within [the membership of] the church, which can be understood only in the context of the often unrecognized diversity of the past” (xiv). One consequence of that diversity is the inclusion in Mormon communities, “particularly among the so-called ‘splinter groups,’ [of] living reminders—embryological vestiges, as it were—of the history through which Latter-day Saint thought has passed” (203). For example, Bush sees the sympathy for herbal medicine evident today among many Mormons as a carry-over from the widespread belief in herbal treatment of illness in America and the Church during the nineteenth century (89).

Throughout the book, clear evidence is given documenting changes in Church policy or guidance. These have been, he generalizes, “invariably . . . in the direction of greater conformity to the general medical and social consensus on the subject” in American society (202). Despite this accommodative trend, he believes that a “core of [Mormon] ethical concern” has held constant. This core, he says, is

tied to central tenets of the faith: the centrality of marriage and children; the overriding importance of maintaining family harmony and stability and protecting the health and well-being of mother, children, and ‘tabernacles-to-be’; the preservation of free agency and personal accountability; and the total unacceptability of decisions based on “selfish” rationales. (203)

He believes that “personal accountability” before God is increasingly being called upon as a solution to health issues. “It seems likely that the church eventually will move further in this direction and substantially limit the circumstances in which it calls members to account in the here and now” (203).

Despite my obvious admiration for the book, I wish gaps in the treatment of several areas had been filled. The approach is, understandably, very physician-oriented—perhaps too much so. “Modern scientific” medicine, of course, has had the most obvious impact on Church policy (we are told on pages 200–201 that a committee of LDS doctors is regularly called upon to advise Church authorities on medical matters). But we would have been helped by some consideration, besides the author’s historical attention to herbal medicine, of competing medical systems—at least chiropractic and homeopathic medicine. (For example, may fast offering money be used to pay for these forms of treatment?) The international spread of the Church particularly calls for discussion of alternative theories of disease and treatment, yet nothing of substance is offered in this volume about conditions among Church members beyond the United States. The discussion is largely Salt-Lake-centric—it looks out and down from the top—like most other treatments of Mormon history, in part because the written sources stem from the center.

The possibility of a wholly different, more ethnographic, view looking from the folk level upward, is hinted at in a single paragraph that states in part, “On occasion the membership at large simply has reached such an overwhelming degree of consensus on a subject, individually and privately, that church leaders in essence ratify their judgment” (201).

Another area that could have been discussed is the role of family and kin in health and medical matters. Some factors I would like to see researched are home doctoring and remedies, lay people’s opinions of professional medical personnel, financial and other support from extended family during illnesses, and transmission through family lines of knowledge and notions about health and illness. At one point, Bush mistakenly says that the home teachers as ward representatives are the first ones called upon to anoint for healing (181), but actually family members are given priority. A related line of inquiry might well be how members explain the fact that health and medical problems are suffered by those they consider their spiritual betters, “the Lord’s anointed.”

Grateful as we should be for this pioneering overview, it is evident that much more could be written on every one of the subjects Bush treats. When he or others proceed with expanded studies, I suggest that more comprehensive use be made of conventional resources in the hands of Mormon historians. The cryptic historical sketches in this book need to be reconciled with more conventional interpretations by historians whom Bush hardly acknowledges. For example, Milton V. Backman Jr. and Richard O. Cowan’s Joseph Smith and the Doctrine and Covenants2 contains reminiscences about the origin and influence of section 89 that give a different perspective about how mandatory the Word of Wisdom was thought to be by the early Church. The American history context of section 89 is also simplified. For example, Bush states, “While in some aspects prescient in the warnings it offered Latter-day Saints of another century, Mormonism’s early health code did not depart appreciably from the conventional wisdom of its day” (51). This statement dodges a key point, that “the conventional wisdom” of nineteenth-century America was a hodgepodge, not a consistent body of belief. Bush does not explain how section 89 omitted so much of that potpourri while hitting valid targets so often. I suspect that Bush is not interested in “Mormon history” per se and so has given its literature short shrift, and he pays even less attention to the apologetic or devotional literature. This lack of interest in history is demonstrated notably by his citing only a single book, that of Jan Shipps, in his skeletal sketch of LDS history (1–7). Her volume is of some interest but makes an odd selection for the sole historical reference in an introduction to Mormonism.

With few exceptions, the author uses language that does not demean the Church or its authorities and is not scathingly revisionist. Some sensitive readers might consider the frequent use of quotation marks around Mormon expressions condescending or ironic; I do not, especially given the general religious and medical audiences intended for the book.

The book is adequately edited, printed, and bound. Unfortunately, its price, much higher than typical for LDS books, will restrict readership among Church members.

Nobody who desires to understand the historical and contemporary Church should fail to read this volume—and then build upon it to go beyond its insights. 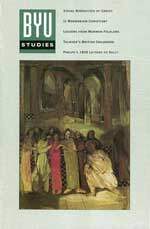 Previous:
The Story of the Latter-day Saints, 2d ed.