History and Faith: Reflections of a Mormon Historian

This declaration of faith by one of Brigham Young University’s distinguished professors and Mormon historians, comes out of a lifetime of studying, writing, and teaching Mormon history, and as such deserves serious attention from a wide readership. A personal testimony on matters of faith, it also evokes the richness of Richard D. Poll’s experience in teaching students and dealing with their problems. Many will find the book both mentally invigorating and religiously rewarding.

These are “not technical, scholarly pieces,” the author tells us, but rather “interpretative and reflective productions of a lifetime. . . . The moral values they emphasize are tolerance, consistency, and commitment.” All are derived from public addresses. The first was given as a sacrament meeting talk in the Palo Alto Ward, August 1967. The others “were given in secular settings to predominantly Mormon audiences.” Drawing from his years of teaching experience, Poll discusses “the implications and problems of studying and writing Mormon history” (vii–ix).

The first chapter is Poll’s widely read talk on the iron rod and the Liahona. Taking his figures from Father Lehi, he distinguishes among “good Latter-day Saints” persons of two different persuasions as to how they approach faith and reason and are guided in the gospel to the tree of life or life’s destination: Iron Rods and Liahonas. By holding fast to the rod of iron, one can follow along and reach the tree of life (1 Ne. 8:19–30). Liahona Latter-day Saints take their cue from the brass ball compass provided Father Lehi, whose pointers “did work according to the faith and diligence and heed which we did give unto them.” Writing appeared “which did give us understanding concerning the ways of the Lord,” the words changing from time to time “according to the faith and diligence which we gave unto it” (1 Ne. 16:10, 26–29). From these figures, Poll has constructed an intriguing framework for characterizing patterns of thought and action of some Latter-day Saints today.

The Iron Rod–Liahona paradigm was no doubt designed for limited applications and is somewhat abstract from scriptural meanings; hence reception of the model has been and will continue to be mixed. While the model may be useful sometimes, when taken seriously or pushed to limits it tends to create stereotypes and divisions where none need exist. Taken separately, the figures tend to polarize. Abstractions are turned into personality traits. The original talk gave little or no room for the possibility of a person following both the rod and the Liahona. It was one or the other. “Revisited” allowed that a person might move from one to the other (20). Since this reviewer sees more similarities than differences, he would prefer an equation of the iron rod and the Liahona, not alone the iron rod or the Liahona. Each points the direction that one must follow to get to eternal life. Since the iron rod is the word of God, one presumably either hears or reads or receives it by direct inspiration; hence mental processes are involved as in the case of receiving instructions and directions from the Liahona. Following the iron rod through mists of darkness may require as much faith and diligence as operating a Liahona. One loses out if he ignores either. They both say, “Live the word of the Lord.” Neither is subject to the manipulation of an individual. We are all Iron Rods and Liahonas, in differing degrees in differing situations or periods of our lives. It is the use of both in harmony that leads to the tree of eternal life.

In the remaining eight chapters, Poll illustrates the historian’s method and approach and the values received from the study of history, among them the liberal education received by those who read a lot of history, compare writers, study sources, endeavor to write, and teach students. In a kindly but emphatic spirit of gentle revisionism and reform, he would set the record straight and adjust somewhat our understandings about Mormonism and Mormon history.

The practicing historian, teaching college students the history of Utah and the Church, meets in his students the greatest variety of beliefs and understandings on major and minor points. The professor is bound to tell it as nearly “as it actually happened” as he can, based on an honest study of the contemporary documents. The reaction of students to that presentation depends on the students’ attitudes of mind, parental teachings, seminary and Sunday School teachers, and peers. For a people who gain most of their Church history from the pulpit, Sunday School, or seminary, the contrast of approaches and information can be threatening. The primary purpose of the pulpit is to sustain faith; that of the college classroom is the discovery and dissemination of truth. Some church speakers and teachers take poetic license and enjoy exaggeration, and sometimes even out-prophet the prophet.

Idealized versions of events that have happened, Poll defines as historical myth. His plea is for historical honesty and correctness, although the process of desanitizing the myth account can be traumatic. He writes:

If people grow up believing that the heroes and heroines of their past were a different kind of people, without the human traits and vulnerabilities which we have, they have been ill served by their “history.” The greater the disparity between myth and event, the greater the potential trauma in confronting the past “as it actually happened.” And the more natural the tendency to respond irrationally. (70)

And again: “I do believe in giving milk before meat, but I do not think children should be taught anything, the unlearning of which will be traumatic. If we create in them the impression that the Church does not change, or that only trivial things change, we create a risk, because some changes are substantial” (86).

The author’s discussion of the role of God and man in history is a promising beginning for a definitive essay on a Mormon philosophy of history. The lack of a Mormon philosophy of history seems not to worry or concern anyone, and that might be just as well, but the question of the role of God and man in Mormon history should be high on everyone’s list of topics to think through. In what ways is God intervening in history? Does man’s free agency work against God’s foreknowledge? Does God’s foreknowledge truly allow for man’s agency? Does God know the end from the beginning? Is there freedom for man to take an effective role? Poll concludes, “the history of humanity is not already written, not even for the Lord himself. . . . God is the producer and Jesus Christ is the central actor in the play, but what happens on the stage depends significantly upon the choices of all members of the cast” (37). When a Mormon philosophy of history is written, it must answer for all peoples in all times and places. It must go beyond our Judeo-Christian tradition centered on the Western world. We must not exclude the East as one of my students once tried to do by declaring “they are not God’s people.”

While each talk stands alone, there is a unity throughout—the same speaker deeply concerned over important issues involving Church doctrine and history. Later chapters contain recurring reference to the subject of change in the Church, the inerrancy (or not) of scripture, the infallibility (or not) of prophets, and the problem of revelation and translation. In “Confronting the Skeletons,” Poll demonstrates how well he can tell a story and analyze a p|roblem as he essays skillfully on the Mountain Meadows Massacre, or Mormon polygamy, or tells of his visit, with his wife, with President David O. McKay and then President Joseph Fielding Smith the same day on the same subject. These and some other sections brighten the entire work into a readable whole.

One is impressed with the revelations of Richard D. Poll’s own thought, and one wonders at his perceptions of the beliefs and understandings of his audiences, to warrant the contents and thrust of these talks. This rich little book will be a gold mine for future historians of popular Mormon thought during the late twentieth century. 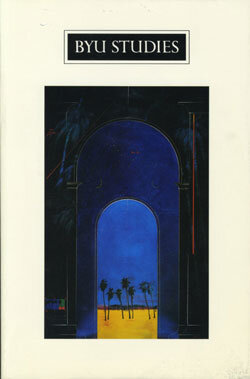