The sickly sweet smell of fermentation reminds me of the overripened fruit that would sit in my childhood garage waiting for autumn canning. Mom, and whoever she could guilt into helping her, would bottle the salvageable fruit from bushels picked weeks earlier. Bottling was drudgery. I loathed sitting next to the kitchen sink, paring knife in hand, the sticky juices of apricots, peaches, or pears splashing all over my arms and face.

Fall processing was the last step in a process that filled my free time from early spring. Cultivating and seed planting in newly thawed soil gave way to the laboriously long days of summer with work that was back-break exhausting—bending and hoeing and weed pulling in our quarter-acre garden. I looked forward to when the sweltering days of summer would give way to pleasant Indian summer days of picking raspberries or scavenging for banana squash or cucumbers in a maze of itchy elephant ears.

Unpleasant as my childhood summer labors seemed, they included small doses of gratification. When we huddled around a bowl of newly shelled peas or freshly blanched peaches, Mom would tell me teasingly that I was to “delight in the fruits of my labors.” Over time her unfailing pleasantness gradually wore me down. I learned to delight in the autumn rituals of harvest, especially when fall labors bore such rewards as a tangy bowl of apricots served with a side of warm cinnamon toast and hot chocolate on a cold January night or a bottle of cherries shared with Mom after school while devouring The Count of Monte Cristo or The Three Musketeers. Shelling peas, shucking corn, or pouring melted paraffin on top of raspberry preserves, Mom was slowly teaching me to appreciate the meaning of “home production.” It became more than just work; in some small way it was beginning to illuminate a way of being.

This past June I packed my little family into our aging Dodge minivan for the sixteen-hour drive to Grandma Dickson’s home nestled in the North Cascade Mountains of western Washington. Imposing Douglas firs, huckleberries, and wild ferns surround the perimeter of a lot accented by carefully tended flower and vegetable gardens. Under a canopy of moonlight, her vegetable gardens teemed with ever-bear strawberries, early raspberries, and blossoming Big Bertha tomatoes. The trees in her orchard already bent with green John-a-Gold apples, Bartlett pears, and Elberta peaches. Flowering iris, honeysuckle, columbine, lilac, and rose bushes perfumed the landscape.

And inside, down in the fruit cellar, stood row after row of bottles: king salmon, huckleberries, applesauce, grape juice, blackberry and boysenberry jam, corn off the cob, pickled beans and beets, cucumbers and onions, even bottles of carefully preserved animal fats used for making soap during leaner times. It was a monument to thrift, to self-sufficiency, and to Grandma’s life.

The day before we left, Grandma’s arthritic hands prepared us grilled salmon in a homemade dill sauce, with new potatoes, freshly baked bread, and home preserves from her cellar. Eating Grandma’s blackberry pie was like eating a slice of heaven, so good it erased the guilt of watching Grandma all afternoon, bent over her walker, struggling from sink to cabinets to stove.

Two months later, I sat in a small chapel with pine benches and floors worn by a lifetime of parishioners with four generations of Grandma’s direct descendents. Aunt Betty, Grandma’s oldest child, delivered the eulogy. She shared with us what she called the many “passions of Geneva.” “You knew Mom loved you,” suggested Betty, “if you were fortunate to receive a slice of her warm homemade bread smothered in butter and her handmade boysenberry jam. But,” Betty elaborated, “you truly knew Mom loved you if you were blessed with one of her homemade blackberry pies.” I had been so blessed at our Last Supper in June. I realized that Grandma had materially left a part of herself in me. Her decades of work had made her love corporeal. Her years of labor had transposed themselves into my flesh and my blood.

The day following her interment, I was once again in Grandma’s cellar, assigned the task of removing all those carefully placed bottles, shelf by shelf. We discovered many bottles had broken seals, their contents long since rotted. My sister Jane and cousin Jody worked with me the good part of the morning, pouring out the contents of the unsalvageable bottles, making new compost for future soil. We carefully divided among us the glass-hooded Ball jars.

That evening, during a dinner of pan-fried fish, Mom walked into the kitchen carrying Grandma’s stainless-steel canning bath. She asked Grandpa if he thought it would be all right if she were to have Grandma’s canner. With a catch in his voice and a quick wipe with his hankie, Grandpa told Mom that he would like to keep it a little longer but promised it to her when the time was right.

The following morning, I said my good-byes, tightly embraced Grandpa and Mom, and headed back home to Grandma’s forty-sixth and seventy-eighth great-grandchildren. When I unpacked my suitcase, I secured the glass hood on Grandma’s Ball jar and set it on the counter next to a bottle of pasta. My life soon returned to familiar routines—taking Caleb to soccer games and Emma to dance, reading in the light of an August evening, and beginning anew the autumn rituals of home production. The bushels of peaches my wife and I had bought at Stratton’s before leaving for Grandma’s funeral were still waiting for us in the garage, beginning to get that familiar overripe smell. We coaxed Caleb and Emma up to the kitchen counter and began the process of blanching, peeling, slicing, and bathing bottles of Elbertas to store up for winter.

Caleb immediately began to complain. He said he hated handling the sticky peaches, hated home production. But as I began pulling up the first batch of peaches from the canning bath, the familiar plaints echoed, then faded. The epiphany I experienced during Grandma’s funeral returned, and through the steamy mist of the autumn ritual of doing and making, my eyes fixed on a glass-hooded Ball jar filled with memories of Grandma. 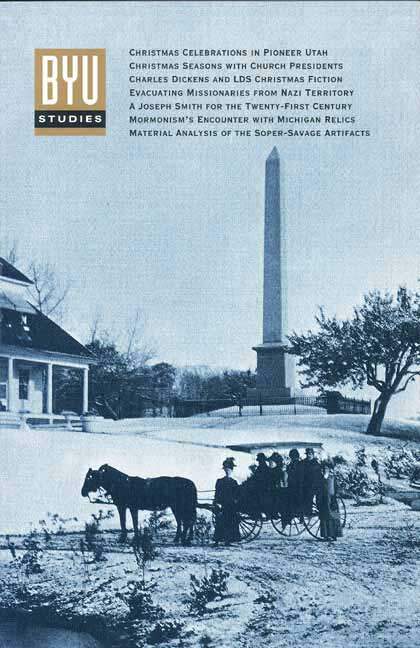 BYU Studies Quarterly 40:3
Next:
Learning to Be a Woman

Christin L. Porter is Assistant Professor of Marriage, Family, and Human Development, School of Family Life, Brigham Young University. He received a Ph.D. in child development and family studies from Purdue University. This essay won honorable mention in the 1999 BYU Studies essay contest. The author would like to acknowledge the generosity of his grandfather, Henry Dickson, and his mother, Carol Dickson Porter, who took time to visit with him about his grandmother following her passing and provided permission to share some of their insights in this essay. Special thanks also to a supportive partner, Julie Ann McNeal Porter, and an insightful friend, Richard I. Kimball, who provided valuable suggestions on earlier drafts of this essay.