On May 5–6, 2005, a conference entitled “The Worlds of Joseph Smith” was held in the Coolidge Auditorium at the Library of Congress in honor of the bicentennial of Joseph Smith’s birth on December 23, 1805. This international symposium, cosponsored by the Library of Congress and Brigham Young University, brought scholars together from several countries and many universities to discuss and commemorate the life and work of Joseph Smith (1805–1844). This volume contains the papers that have emerged from this conference.

The idea for this conference began with a conversation between Robert Millet and Gerald McDermott, who had just been involved in the academic celebration at the Library of Congress in honor of Jonathan Edward’s three-hundredth birthday. Agreeing that a conference on Joseph Smith sounded promising, Millet contacted people at Brigham Young University and in the Public Affairs office of The Church of Jesus Christ of Latter-day Saints to begin discussing the possibility. An initial contact was also made with Senator Robert Bennett’s office.

At about the same time, James Hutson, Director of the Manuscripts Division of the Library of Congress, had directed an exhibition sponsored by the Library entitled “Religion and the Founding of the American Republic.” During its travels around the country, this exhibition was on display for three months at Brigham Young University at the time of the Salt Lake City Winter Olympics in 2002. In bringing this exhibition to Provo, Utah, Hutson had worked with John Welch, editor of BYU Studies, who hosted this event at the Harold B. Lee Library.

These strands came together when Hutson and Millet conferred with each other and the two of them readily agreed that a conference on Joseph Smith cosponsored by the Library of Congress and Brigham Young University would be of great interest to scholars as well as to the general public. With that encouragement, an organizing committee consisting of Hutson, Millet, and Welch, together with Richard Bushman and Richard Turley, was formed, and plans were laid.

The conference was organized into five plenary sessions, which are reflected here in the five parts of this book. Except for session three, each session began with a principle paper and was followed by papers from three respondents. The five worlds in relation to which the experiences and contributions of Joseph Smith were examined included (1) the surrounding world of his day, (2) the formative world of the past, (3) the personal world of touching human souls, (4) the transcendent world of theology, and (5) the progressing world of the future.

The opening greeting by James Billington, Librarian of the Library of Congress, set the stage warmly and succinctly for this memorable conference and this resulting volume. He said:

It is really a great pleasure on behalf of my colleagues here at the Library of Congress to welcome you to this symposium cosponsored by Brigham Young University celebrating the bicentennial of the birth of Joseph Smith.

In 1819, John Adams, who as president had signed the legislation creating the Library of Congress, informed a correspondent, Adamon Kronium, “The science of theology is indeed the first philosophy—the only philosophy that comprehends all philosophies, all science. It is the science of the universe and its ruler, and what other object of knowledge can there be?” So, I think Adams would be pleased that present-day Americans continue to be interested in theology and religion as an important part of American history and an important part of life. He would not be surprised at the passions, of course, that these subjects generate.

Since the Library of Congress is really the world’s largest repository of stored knowledge and the mint record of American creativity (thanks to copyright deposit and the deposit of so many of our creative figures), it is an ideal forum for an intellectually rigorous exploration of religion and its impact on society. In recent years we have hosted conferences and mounted exhibits on the following subjects: “Was Rome Reborn?” (an exhibition of the treasures of the Vatican library); “In the Beginning Was the Word” (discussing the Russian Orthodox Church’s archives here in North America and its interaction with Native Alaskan cultures); “Let There be Light” (on William Tyndale and the making of the English Bible); and “Religion and the Founding of the American Republic.” In 2003 the Library cosponsored with Yale University a symposium marking the tricentennial of the birth of Jonathan Edwards, and most recently the Library cosponsored “From Haven to Home—350 Years of Jewish Life in America.”

It is, therefore, extremely appropriate and welcome that we continue to examine significant religious movements and the lives of important religious personalities, particularly when they impact so directly and reflect in so many ways important things of our own broader history as Americans. So today we bring together leading scholars to investigate the career of Joseph Smith, founder of The Church of Jesus Christ of Latter-day Saints, to determine his influence on America and the world. I have no doubt that the papers delivered at this conference will deepen our knowledge of Joseph Smith.

The richness of the Library of Congress’s collections is never better illustrated or better used than in illuminating subjects on which it might be assumed that our collections will be weak. We recently had an exhibit of Winston Churchill and discovered that we had seventeen letters of Winston Churchill, which we had not known in the course of properly preparing for the exhibit. These letters described his experiences in the trenches of World War I, about which relatively little had been known.

We also have strong holdings on the Mormons and on the LDS Church. Proof of this are the documents in the cases in the foyer just outside this auditorium. Among those documents are treasures including Joseph Smith’s 1829 copyright application for the Book of Mormon and an accompanying printer’s proof sheet of the title page of the Book of Mormon, which experts tell us is the actual first printed document in Mormon history.

So we are happy to host this symposium. I am certain that it will be an intellectual feast for everyone. I extend appreciation from all at the Library of Congress to all involved in this conference, particularly to Brigham Young University with whom we have had such an excellent sponsorship of this gathering. Thank you and good conference.

Many people deserve special recognition for making this conference so successful, including leaders of the hosting institutions, participating scholars, curators, technicians, volunteers, and employees. Thousands were able to view the proceedings, either in person or over the Internet. This volume makes it possible for readers to explore further the assertions, references, conclusions, and implications of these engaging presentations.

Several interesting points of discussion, consensus, and divergence arose in this conference. While all agreed that the sincerity and significance of Joseph Smith was not to be doubted, people wondered, Can he best be understood in an American context or transnationally? Should he be approached through the tools of Enlightenment rationality or Romantic sensibilities? How should, or how can, his effulgent approach to religion be characterized? How and why have his seminal ideas become so influential in the lives of his many adherents? What do his prophetic insights and promises offer to people today the world over?

At the end of the conference, one of the participating scholars remarked, “Something very important has happened at this conference. We will arrive at some point in the future when we will look back and say, ‘This development began at the Library of Congress.’” We hope that this volume will be a clear and useful point of departure for everyone involved in that ongoing quest to assess and know the many worlds relevant to Joseph Smith. 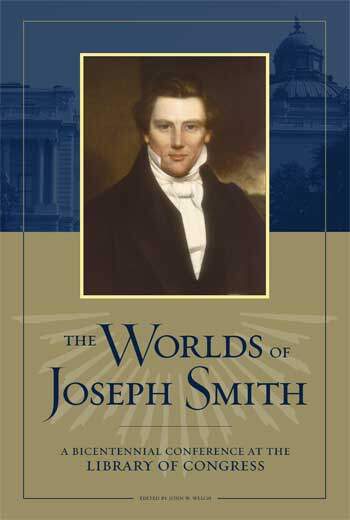 BYU Studies Quarterly 44:4
Next:
Part 1: Joseph Smith in His Own Time