“It Seems That All Nature Mourns”

Sally Carlisle was born in New Hampshire in 1805. She married James Randall, and they settled in Warsaw, New York, where they had two sons, George and Eli, and converted to Mormonism. They moved to Nauvoo in 1843. A collection of Sally’s letters addressed to friends and family has been preserved.1 The letter she wrote July 1, 1844, less than a week after the martyrdom of Joseph and Hyrum Smith, has a remarkable provenance (see sidebar).

Sally wrote to her “dear friends” in the East, explaining her perceptions regarding the Martyrdom, and thus provided one Latter-day Saint woman’s response to what she described as “one of the most horible crimes comited that ever history recorded!”

The historical record is rich with such accounts, but Sally’s letter is remarkable for several reasons: in it we hear a believing woman’s voice, and in it we have captured a very early response to the tragedy, a raw and revealing reaction. Because Sally wrote so shortly after the event, historians can distinguish between what Saints in Nauvoo believed at the time of the Martyrdom and later traditions that characterize reminiscences composed years after the event took place. She clarifies that Saints in Nauvoo believed the city council’s decision to destroy the Expositor press was a catalyst for the antagonism leading to Joseph’s death.2 They faulted the governor of Illinois, Thomas Ford, for not protecting Joseph, and they believed that Joseph and Hyrum voluntarily suffered martyrdom to seal their testimonies with their blood. She even reports that Joseph foreshadowed his death by urging Saints to read chapter 6 of the book of Revelation. Sally’s letter has a remarkably detailed description of the Martyrdom itself.3 She corroborates the many historical accounts that describe the awful feelings experienced by the Saints and the faith and fortitude that characterized their response.4

In 1962, I was serving in the Northern States Mission, headquartered in Chicago. While my companion and I were tracting in the western suburbs of Chicago one day, we tracted out a sister member living in the ward boundaries. She said she had just received the Church magazine the Improvement Era, and it was not her family’s name on the mailing label. She did not recognize the person’s name, but the address was on the same street a block or so away. She gave us the magazine and we went to the address.

The person whose name was on the magazine invited us in. Unfortunately, I did not write down his name in my journal. Being nineteen at the time, I guess I didn’t think it was important. He told us his father used to live in Utah and was friendly with the Mormons but was not a member. To keep abreast of what was going on in the Church, he [the man’s father] had subscribed to the Church magazine. His father was a doctor and used to buy old trunks at estate sales. One of the trunks he purchased had Sally Randall’s original letter in it. We talked this man into letting us take the letter and make a photocopy of it. Unfortunately, the equipment at that time was not very good—hence the poor quality of the copy. The letter was also old, and the paper somewhat faded.

I can find only two of the three pages of the letter. I think that when I was being transferred around in the mission field I misplaced the last page, but the bulk of the letter is contained in the first two pages. I typed up a copy of the full three pages while I was in the mission field with the help of a member of the Church who was in the media, so the typed copy is accurate. 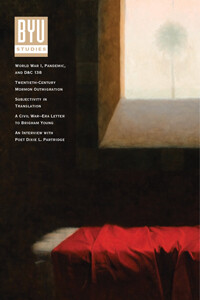 Previous:
"I Long to Breathe the Mountain Air of Zion's Peaceful Home"

Jordan Watkins received a BA in history from Brigham Young University and has been admitted to the MA program in history at Claremont Graduate University. He has presented papers at conferences held for the Rocky Mountain Modern Language Association and the Mormon History Association.