Two books about blacks and the Church

Most of his black brothers would call him an Uncle Tom. Many of his white brothers at BYU have showered him with almost apologetic kindness and attention in an effort to somehow demonstrate to everyone—and themselves—that they are not racists, that they really like Al Cherry, black Al Cherry.

Having found himself a center of attention among other Mormon students, it is not surprising that Cherry should publish something like It’s You and Me, Lord! The subtitle, “My Experience as a Black Mormon,” will obviously make the book sell; it made the reviewer apprehensive of a focus on popular controversy rather than upon substance. But apprehension of mere controversial content are quickly stilled—even lulled to sleep—as the first two-thirds of the already short book pass quickly without any mention of the LDS Church. But with two strikes against him Cherry finally delivers something really meaningful. In a casual, friendly rendering of his feelings, he somehow manages to avoid the defensive sort of logical argumentation that tends to plague pro-Mormon publications on this subject. Rather than quoting stories of the pre-existence or dubious conclusions from questionable survey data, Cherry simply explains that for him, “the important thing in God’s Kingdom will not be who leads us there, but simply who gets there.” At the same time he delivers strong and well-deserved criticism of complacent Priesthood holders and of apologetic Mormons who have told him they would not have joined the Church had they been black.

Hopefully Cherry’s book will signal some kind of change from the traditional “defense argument” approach by Mormons to this subject. Unfortunately, but almost inevitably, Latter-day Saints had to await a Black to begin to make this change.

It is ironic that while a black convert student was publishing It’s You and Me, Lord! another student, a returned missionary who also sincerely “cared for the people of the Church and was committed to the Church’s humanitarian and moral ideals,” was publishing Mormonism’s Negro Policy: Social and Historical Origins. Stephen Taggart’s conclusion, quite different from Cherry’s, is that “the weight of the evidence suggests that God didn’t curse the black man—his white children did.” Taggart’s well-written and very readable little book carefully traces the development of the Mormon Negro policy, concluding that the policy stems from conciliatory efforts made by Joseph Smith and others in response to social stress created by the Church’s location in the 1830s in pro-slavery Missouri. Taggart’s facts are generally well documented, although one key document, an “Extra” edition of The Evening and Morning Star which was printed in July of 1833, is summarized by Taggart rather than quoted directly, and is never footnoted. Many of his statements are carefully qualified in an effort to preserve historical accuracy, but most of the pivotal conclusions, and often the basic assumptions with which he examines many of the documented statements, are questionable at best. A policy statement printed in the revised edition of the Doctrine and Covenants in 1835, which cautioned against disobedience or disrespect for the law—which at the time legitimized slavery—is interpreted by Taggart as having been a formal credential of the Church’s “proslavery colors.” His interpretations of the motives of Joseph Smith and others are usually couched in such phrases as “probably intended” or “apparently intended.”

Taggart’s documented evidence, in itself, positively relates the policy’s first definition to the Missouri period, but establishes little beyond that. That the policy’s definition was related to that period is only logical—social situations usually act to necessitate policy definition—but no evidence presented by Taggart substantiates his thesis that social stress determined the policy’s content. The real core of his case is Taggart’s own unsubstantiated conclusions—such as Joseph Smith’s having conveniently added allusions to Priesthood denial to the first chapter of Abraham in the Pearl of Great Price in an effort to manufacture a theological justification for his Negro policy, which up to that point had rested only on reheated Southern Fundamentalist dogma. What Taggart presents, finally, is a new—and very good—adaptation of the old argument that Joseph Smith was a very good and resourceful man, that the Church is probably the “best,” but that at least some of what is claimed to be revealed from God is of ordinary human origin.

Hopefully, before or after reading Taggart’s interpretation of the revelatory significance of the policy, the reader will consider the official statement of the First Presidency reported in the February, 1970, Priesthood Bulletin, which restates “the position of the Church with regard to the Negro both in society and in the Church.” 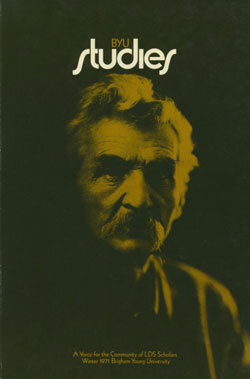 Previous:
Succession in the Church