What’s this, a serious verse play drawn from the most difficult and perplexing book of the Bible, a smashing box office success? Incredible! Can it be that this “beat,” “atomic,” sophisticated generation is suddenly so out of character that it has succumbed to the moral platitudes and preachy dogma of a typically sentimental religious drama and is standing to cheer?

Only the cheers are real. The universally acclaimed and prize-laden JB has brought its author, poet Archibald MacLeish, almost unknown in the theatre prior to this play, a reputation which at least in Europe ranks him as one of the top half dozen playwrights America has produced. JB was selected for presentation as representative of the art and culture of the United States during the 1958 International Exposition at Brussels before it was shown on Broadway.1

The critics were as unanimous as they were lavish in their praise of MacLeish’s drama. (The single qualification was the occasional unevenness of his verse.) These are typical accolades:

“[JB] . . . may well become one of the lasting achievements of art and mind in our time.” —Saturday Review

“In form as well as content, Archibald MacLeish’s JB ranks with the finest work in American drama. . . . In form, it is theatre. In content, it is truth on a scale far above the usual dimension of our stage.” —Atkinson (New York Times)

JB has been translated widely and already is considered abroad as America’s best play of the decade. With its amateur release its position may be extended to eclipse the current world-wide favorite American play, Thornton Wilder’s Our Town. Although the latter is universal in its appeal and inner beauty, its atmosphere, manners, and setting are typically American. JB, on the other hand, is the personification of “everyman.” A German critic from Düsseldorf makes the common observation: “The play evoked the feeling that Job is in every one of us. . . . Tomorrow it may be us.” Because of the quick and general acceptance of this play in Europe, it could be that in addition to being the giant among modern verse dramas its greatest contribution may lie in its helping to dispel the current hostility that is felt for all things American in many parts of the world.

The cold war uncertainty, frustration, violence, and malaise all contribute to the self identification of the entire atomic age with Job’s sufferings and plaintive cries as to “why . . . why?” His tragedies—loss of loved ones, social status, war, devastation, financial failure, paranoia, physical and mental anguish—are our great tragedies. And like Job we are much more willing to confess our guilt than to admit our folly.

Another reason for the success of this contemporary version of the Book of Job is the slickness with which it avoids sentimentality (except perhaps at the end); nor does it conform to the usual stereotypes found in most religious plays. In fact, JB is not a religious or faith-promoting play. In the use of two broken-down but sympathetic actors in a modern sideshow setting MacLeish discovered a device by means of which he could portray the religious narrative of the Bible and at the same time be sufficiently detached to speak in the modern idiom. He relieves the dramatic tension through humor and colorful, bellicose verse and successfully eschews the maudlin and sanctimonious. Yet there is some hauntingly beautiful poetry as MacLeish attempts to answer man’s eternal complaint, where is justice? Job’s wife answers that there is no justice, only love. The justification of the injustice of the universe is our love, our love of life in spite of life.

You wanted justice, didn’t you?
There isn’t any. There’s the world . . .
Cry for justice and the stars
Will stare until your eyes sting. Weep,
winds will thrash the water.
Cry in sleep for your lost children,
Snow will fall . . .
snow will fall . . .

Then the author’s final affirmative answer as to how we must pick up our lives again after terrible disasters:

While this language is evocative and moving, is its message an oversimplification? This simple and somewhat bleak solution to the problems of the universe has received the bulk of the criticism leveled against the play. In an article which appeared in the New York Times and which is now a forward to French’s acting edition of the play, MacLeish defends his thesis:

Christ’s answer was also love but of a much more elevating and all-encompassing variety (including the conquering of death), with love of God the key factor: through a genuine love of God and one’s fellow men man may return to the presence of an all-loving Father in Heaven. According to MacLeish, Job’s God is completely indifferent to his sufferings and is interested only in cowering Job into submission in order to display His “own power and Job’s impotence.”

Elia Kazan, director of the New York Production, finally prevailed upon MacLeish, six months after the Broadway opening, to alter slightly this final scene to make it stronger dramatically and to be more consistent with the remainder of the play.

The new ending and a few other changes added since the play’s run began, but which are not found in the reading edition nor the translations, do perhaps make it a better integrated play, but they magnify MacLeish’s negativistic and unchristian philosophy. He makes a moralistic, modern-day fable out of what he considers an age-old myth. MacLeish not only does not believe in a personal God but apparently is not a theist of any sort (although he does remain faithful to the Job original in his play by having God speak with a whirlwind). MacLeish does say in his article: “To me, a man committed to no creed, and more uncertain than I should be of certain ultimate beliefs, the God of Job seems closer to this generation than he has to any other in centuries.” A solicitous, kind, wise, and loving Father in Heaven does not exist in this play. It is man on his own. Church and God are closed issues:

The candles in the churches are out.
The lights have gone out in the sky.

In the final, poignant scene MacLeish’s protagonist repudiates God and faith in the future. Man’s only resemblance to faith and hope for the future lies in the fact that he is a feeling, suffering, and therefore a loving organism. But man is independent of any supernatural force. He is here in ignorance and after this life there is nothing but blackness: “With the dark before, the dark behind. . . .” However, because man is a loving animal he will continue to survive, continue to suffer, and continue to make the same stupid blunders.

Many of those who admire MacLeish as a writer regret that since he used religious material he didn’t make JB into a religious play. In his forward he claims the only justification he can plead is “I badly needed an ancient structure in which to build the contemporary play which has haunted me for five years past and the structure of the poem of Job is the only one I know into which our modern history will fit.” Perhaps he thinks theatre and God are incompatible, or merely that God is a puerile superstition. At any rate his urbane nihilism which reads God and faith in a future life out of the picture leaves much to be desired in the minds of most Christians. MacLeish’s paraphrasing creates a serious distortion. The Job of the Bible never loses his trust in the Lord. The character of Job and unwavering, persevering faith have been synonymous in the minds of Christians for centuries. It is true that the dignity of man is emphasized in Job as nowhere else, but man enjoys the position he does, not in spite of God, but because God has so elevated him.

The same exhalting idea is beautifully echoed by the psalmist:

What is man, that thou art mindful of him? and the son of man that thou visitest him? For thou hast made him a little lower than the angels, and hast crowned him with glory and honour. —Psalms 8:4, 5

This theme is much more vital, is potentially just as dramatic, and could contribute so much more stimulation and inspiration to our daily problems than the question of meaningless suffering which dominates MacLeish’s fine drama and which he tries to answer in his newly revised ending. JB’s concluding speech in response to the previously quoted lines of his wife, Sarah, which ended the original version is:

We can never know.
He answered me like the stillness of a star
That silences us asking.
No, Sarah, no:
We are and that is all our answer.
We are and what we are can suffer. But . . .
what suffers loves.
And love
Will live its suffering again,
Risk its own defeat again,
Endure the loss of everything again
And yet again and yet again
In doubt, in dread, in ignorance, unanswered,
Over and over, with the dark before,
The dark behind it . . . and still live
. . . still love.

Unfortunately for a generation needing assurance and security the muted message of hope and faith of the earlier ending is thus negated. It at least speculated: 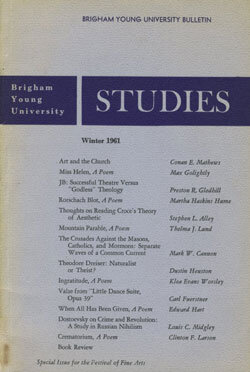 Dr. Gledhill is professor of speech at Brigham Young University.

1. The Western Speech Association was granted special permission by Mr. MacLeish to perform a dramatized reading of JB at its 1958 convention just one month before its spectacular opening in New York. It was directed by Dr. Gledhill with a cast from Brigham Young University.