For more than a century and a half, writers hostile to Mormonism have sought to discredit the ancestors of Joseph Smith. Seeking to undermine the work and claims of the Mormon leader, they have pictured his forebears as neurotic, irreligious, gullible people. In this excellent book, Richard Lloyd Anderson has successfully repudiated the myths and distortions concerning the ancestors of the Prophet.

Drawing upon his dual training as lawyer and historian, Dr. Anderson, professor of history and religion at Brigham Young University, has assembled a solid case based on sound historical evidence—evidence he believes will correct earlier misinterpretations concerning the ancestors of Joseph Smith. The extent and quality of his evidence, gathered during years of research, is evident in his “Notes on Text,” running almost sixty pages.

Leading off with a chapter on Solomon and Lydia Gates Mack, Professor Anderson provides information of interest and relates the lives of these people to the historical period in which they lived. Thus, Solomon Mack’s adventures in the French and Indian War and the American Revolution come to life when viewed against an accurate historical background. In his chapter on the Macks, Anderson corrects distorted views of the Prophet’s grandfather. Many writers have charged that he was an epileptic and that his weakness was inherited by Joseph Smith, who supposedly had his vision while under the influence of an epileptic seizure. Facing this matter squarely, Anderson explains convincingly that several severe accidents caused a history of convulsions in the later life of Solomon Mack. Clearly this physical condition was not hereditary and was not transmitted through Joseph Smith, Sr., to the Prophet.

According to Anderson, one of the primary influences inherited by Joseph Smith was the patriotism of his grandparents. This theme receives ample treatment in his chapter on Asael Smith. Joseph Smith claimed the “love of liberty” from both grandparents. One statement attributed to Asael Smith and quoted in the text bears repeating here:

Bless God that you live in a land of liberty, and bear yourself dutifully and conscionably towards the authority under which you live. See God’s providence in the appointment of the Federal Constitution, and hold union and order as a precious jewel (p. 92).

Certainly such views are evident in the writings of the Prophet, a man who was positively influenced by his grandfathers.

Critics have charged that Joseph Smith’s ancestors were shiftless and lazy and consequently subject to suffering and poverty. Anderson shows that the financial difficulties of Asael Smith resulted not from his own laziness or ineptness, but rather from the circumstances in which he found himself. Sickness and inflation played a devastating role, leaving the family without money when it was sorely needed.

One of the most interesting aspects of the book is “John Smith’s Family History.” John Smith, brother of Joseph Smith, Sr., was encouraged to write this history by his son George A. Smith, counselor to Brigham Young. This account contains an excellent personal description of Asael Smith as viewed by his son and provides convincing information concerning his character. Asael’s willingness to assume some of the burdensome financial obligations of his relatives, for example, attests to his generosity, a quality also shared by the Prophet Joseph.

Although the text concentrates on the lives and influences of the grandfathers, Solomon Mack and Asael Smith, some attention is devoted to the grandmothers, Lydia Gates Mack and Mary Duty Smith, thus dispelling any fears of male chauvinism. Alongside biographical information concerning all four of the Prophet’s grandparents, the author has included two chapters on the writings of Joseph’s grandfathers, as well as a chapter containing a family history.

Mechanically, the book is without flaw. Clearly and logically organized, it is also an attractive volume. Well bound and handsomely illustrated, it brings credit to both author and publisher. Of particular value are the maps, which are unusually clear and professionally executed.

Although generally well written, the book is not without fault. The title raises false hopes. Only one small segment of “Joseph Smith’s New England Heritage” is presented. One would hope that more of the heritage would follow in other volumes. Reprinting so much material, a majority of which is available elsewhere, raises serious doubts concerning its purpose and value. Clearly, more justification is needed to explain the inclusion of 66 pages of reprinted material in a total text of 159 pages.

On balance, however, it is an excellent book. Richard Lloyd Anderson has succeeded in cleaning up a family record besmirched by historical mudslinging. He convinces his readers that Joseph Smith and his parents “matured under intense exposure to moral responsibility, unselfishness, personal tenacity, intellectual awareness, and intelligent sincerety.” 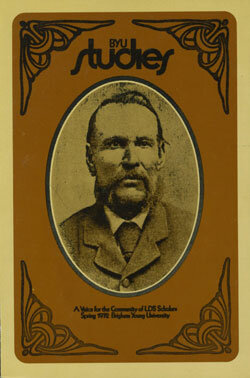 Next:
The Quest for America