The purpose of this latest publication of the “New Translation” of the Bible is stated in the Foreword as an attempt to give “ready access to the total specialized treatment of the Bible prepared by Joseph Smith, Jr. in the 1830’s and the 40’s.” It purports to “compare in totality the differences which accumulated in this New Translation which evolved as the Prophet sought enlightenment which he and other associates paged through their King James Bible.”

This is a worthy task and a much needed publication, and the Herald Publishing House is to be commended for attempting to bring together all of the textual changes which were effected by the Prophet Joseph Smith in his work with the Bible. Placing these in parallel columns with the King James Version makes the textual variants readily accessible to all who wish to become acquainted with the “New Translation,” or as it is commonly called, the “Inspired Version of the Holy Scriptures.” Anyone who has tried to search out the textual variants for himself will appreciate the immensity of such an undertaking.

The introduction, consisting of three articles by F. Henry Edwards, and which were originally published in the Saints Herald in 1967, adds to the value of the publication. Mr. Edward’s articles are enlightening and interesting and present the kind of informational background that could only be obtained by an examination of the original documents from which the printed editions of the Inspired Version of the Bible were prepared.

However, as is often the case in the first editions of publications of a highly technical nature, there are some significant shortcomings and weaknesses which have no doubt occurred unintentionally and seem to be the result of insufficient investigation and/or carelessness in the preparation of this book. The most noticeable deficiencies are as follows:

(1) There are numerous passages that were revised by the Prophet Joseph, which are in the regular printed editions of the Inspired Version, but which have not found their way into this comparison. This apparent oversight by the publishers should be remedied in future printings, but there are so many omissions that it might require a completely new setting of the type. Perhaps the passages could be added in a supplementary section and placed in the back of the book. A partial list of missing passages includes, Exodus 3:3; Psalms 19:13; 27:3; 37:38; 105:42; Isaiah 2:2; 2 Corinthians 1:17; 5:14; 5:16; 5:19; Galatians 3:29; Ephesians 2:11; 1 Thessalonians 2:16; 1 Timothy 3:8; 2 Timothy 4:1 and 1 Peter 5:13. Also, Hebrews 5:7–8 does not contain a textual revision, but should be accompanied by an important explanatory footnote. The footnote is missing in this publication. All of the foregoing reference citations (which is not a complete list) are from the printed editions of the Inspired Version.

Thus, when the Inspired Version reads: “. . . a hundred and fourscore (2 Kings 19:25), and the King James version reads “an hundred and fourscore,” and the difference in the text is only the indefinite article, this is not a deliberate verse revision by Joseph Smith. This reviewer has examined the King James Bible used by Joseph Smith, and knows this to be a fact. Since there are a great many comparisons of this nature in the book, and no explanation is given concerning it, it creates a tendency to lead the reader to the unwarranted conclusion that these passages were the work of the Prophet.

(3) The manuscript prepared by Joseph Smith and his scribes includes no changes whatsoever for the books of Ruth or Ecclesiastes, yet this publication lists some minor variants in these books involving indefinite and definite articles, and also minor spelling variations such as “veil” and “vail” (Ruth 3:15), “further” and “farther” (Ecc. 8:17). There are many such variants, but again, these are due to the edition of the King James version used in the comparison and not due to the work of Joseph Smith. This situation should probably be explained in the Foreword of future editions. Actually, the book of Ecclesiastes is not even mentioned in the manuscripts prepared by the Prophet and his scribes.

(4) The book also presents for comparison those passages having a verse number that differs from the King James version, even if there is no textual difference. This is misleading since the detailed versification of the Inspired Version is not the work of the Prophet, but rather of the RLDS publication committees of 1866–1867. This fact perhaps should be explained in the Foreword of future editions.

(5) The format is somewhat awkward. It is customary in parallel columns to place the King James version on the left and the Inspired Version on the right. In this instance the order is reversed. Although this is only a matter of taste, it is at first a little disconcerting.

It is not intended that anything in this review should lessen the importance of the Inspired Version or discredit the goals and desires of those who have prepared this valuable new publication. It is simply an observation that in some respects the book falls short of being a “comparison in totality of the differences” that were effected by the Prophet Joseph, while on the other hand in some instances the book tends to go beyond what the Prophet actually did. Future editions could benefit from a more thorough explanation in the Foreword, and also a supplement of the missing passages.

One further observation. In Mr. Edwards’ second installment (page 14) he raises some questions concerning the date, content and comprehensiveness of the Bernhisel copy of the inspired version manuscript, (which is in possession of the LDS Church Historian in Salt Lake City) and states that “we do not know” the facts concerning it. The interested reader will be pleased to know that the entire text of the Bernhisel Manuscript, accompanied by an extensive description, including dates, is on file in the RLDS Historian’s Library in the Auditorium in Independence.1 This was not available at the time Mr. Edwards first prepared his paper in 1967. 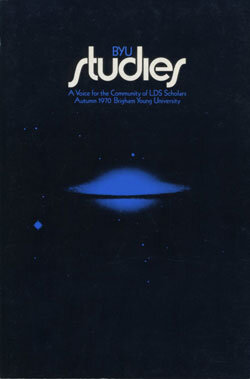 Next:
Uranium Fever, or No Talk under $1 Million

1. This is contained in “A study of Joseph Smith’s Revision of the Bible,” unpublished Ph.D. dissertation, BYU, 1968, by Robert J. Matthews.