This book is a collection of twelve sociological studies that examine how active, faithful Latter-day Saint singles go about deciding to marry and selecting a mate. Since most of the research was conducted via surveys of BYU students and asks the question “What makes the Mormon marriage process different from the typical American process?” it accounts for a very narrow part of the worldwide LDS community. Focusing on this small segment is a good start but shows that research in LDS sociology is still often limited in its scope.

An introductory chapter by Thomas B. Holman provides the backdrop necessary for comparing LDS teachings and the American dating scene. His overview shows how Church standards are increasingly at odds with American culture, especially concerning young people’s desire to get married and comparative rates of sexual activity.

A highlight of the collection is “Hanging Out or Hooking Up: The Culture of Courtship at BYU,” by Bruce A. Chadwick, Brent L. Top, Richard McClendon, Mindy Judd, and Lauren Smith. This piece was also printed in BYU Studies 46, no. 3 (2007): 67–90. It surveys BYU students’ responses to important questions about whether students actually want to be married (the answer is yes), how they go about dating (hanging out in groups is the usual way to start), and how they think they will recognize the person they want to marry (spiritual confirmation ranks highest, but only about one-fourth of students surveyed offered this response). The survey was conducted in 2002 and so provides a fairly up-to-date confirmation that students generally follow the counsel they are given at church.

The next study, by G. Bruce Schaalje and Holman, presents a baseline of data (conducted in 1993) on the length of time BYU students date before becoming engaged, the length of engagements, their age when they first marry, and students’ attitudes toward each of these practices. The data show that married BYU students were married about two years younger than their American counterparts; however, the survey excludes students who drop out at the time of marriage and those who get married after graduation—a limitation that may significantly affect the results. Two fascinating aspects of this topic stand out: missions affect marriage age not only by taking many men and some women out of the BYU dating pool, but also by leading to a higher percentage of husband-younger-than-wife marriages than is found in American society, caused by couples who met on their missions. And “single students in the College of Fine Arts favored significantly longer dating periods before engagement than students in other colleges” (56).

The next essay presents a study by EmRee M. Pugmire, Vjollca K. Martinson, and Holman. It starts with a general survey of BYU women about their role in courtship, then narrows with in-depth interviews of a small selected group of respondents who demonstrated a desire to be a strong partner. These women “are not stating that they want total equality. Rather, they want to be able to influence, and they also want to be influenced” (61). “They sought a relationship in which both partners were contributing fully, caring wholly, and bringing their particular strengths to the relationship” (69). This attitude differs from a typical feminist agenda, which focuses on equal sharing of household and family duties.

A study of the dating practices of male returned missionaries by Nancy C. McLaughlin surveys four categories of attitudes they have about dating. Most return missionaries report that the transition to dating after a mission was not difficult, but immediately after their return some felt a “false sense of preparedness for marriage” (75). With time they learned to date in a less driven, more comfortable friendship-first style. Most report that their missions helped them be more outgoing and increased their awareness about family relationships (83).

Craig James Ostler presents “Seeking, Sending, and Receiving Interest Cues.” The bottom line here is that those who don’t flirt don’t date very much. And it is clear that Mormon young adults learn to act very differently when they are not in a safe group of other Mormons, lest those “interest cues” be misunderstood.

The process of creating a new family from two “families of origin” is explored in the next piece by Cynthia Doxey. She describes how all parties involved can maximize their happiness by accepting each other: a new couple “should recognize the importance of having an accepting relationship with their own parents and their parents-in-law” through good communication and good will (121). And “parental acceptance and support can influence couple unity and identity” (118). In this process it is not necessary to have equal time with each set of in-laws or expect a change of behavior from a perceived wrongdoer; feelings of acceptance can come through a change of heart.

The practice of creative date invitations (such as sending a date invitation via a treasure hunt or a “Fear Factor” challenge) is likely to sound crazy to people unaccustomed to it. Author Kristi A. Young does not specify the geographical boundary of creative invitations, but my guess is it is limited to Utah (all the stories happen in Utah) and places where transplanted Utahns have some social influence. Young uses folklore theory to examine how such creativity allows self-expression for young men and women.

Mary Jane Woodger writes about the process of deciding on a mate and desiring spiritual confirmation of the decision. She briefly relates over one hundred specific examples that include “visions, voices, dreams, temple experiences, blessings, and inspiration” (159). These anecdotal experiences evidence that we are a people who believe in and have overt manifestations, but many of the stories told here involved a man and a woman who barely knew each other or had not even formally met making a decision to marry. And it’s not just reckless youngsters who do this: one previously married grandfather “felt it was a sign to marry his second wife when she put nutmeg in an apple pie in the same way his first wife had” (145). I would hesitate to encourage anyone to select a spouse using such a method.

Also by Woodger is a chapter on the unique LDS models of marriage proposals. The uniqueness stems from the LDS belief in the eternal nature of marriage: One woman, “when making a peanut butter and jelly sandwich for her boyfriend, was asked if she would make ‘his peanut butter and jelly sandwiches for eternity’” (167). Couples are sometimes expected to provide a good proposal story in announcing their engagement. One young man “did not have a unique story to tell. Bowing to peer pressure, he asked his wife to marry him again in a memorable way so he would have a story to tell the curious” (168). If you happen to be looking for creative proposal ideas, this chapter is a gold mine.

In the next study, Rhonda Walker Weaver writes about trousseaus as a folkloric tradition: the making of quilts, hand-decorated tablecloths, and crochet-edged towels trained girls not only in home crafts but in looking forward to marriage. Today’s young woman may more likely desire to enter a marriage with a diploma in hand than a well-stocked cedar chest, but LDS tradition still emphasizes careful preparation for marriage and stresses marriage as a serious life event.

A final piece by Kristi A. Young also uses folklore methodology in looking at Mormon wedding receptions. Again, the stories are anecdotal, but the collection shows a firm tradition among Latter-day Saint couples to use receptions to portray their personalities, and in so doing they express the liminality of the moment as a step from one stage of life to the next, a “time out of time” (199).

In sum, these chapters explore what is peculiar about Latter-day Saints in dating, courtship, and marriage traditions. While we could do without many of the traditions, I found great hope in some of the wisdom expressed by young people and told here. For example, when asked what kind of relationship she desired with a future spouse, one young woman said, “It’s better to be good friends with someone and have that friendship before you start getting more involved. . . . It’s harder to learn how to be friends than it is to learn how to have that romantic element” (66). While Latter-day Saint couples will enjoy having their fun stories to tell, their marriages will not be solid without such a foundation.

Jennifer Hurlbut has been a managing editor at BYU Studies since 1998. She earned a BA from Brigham Young University in international relations. 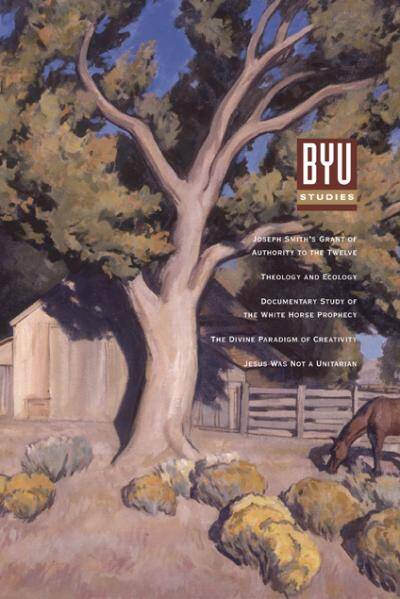