Messages of the First Presidency, Volume 2

Messages of the First Presidency, Volume 2, compiled by James R. Clark, will make an excellent contribution to the literature of the Church. These messages cover the period from 1849 to 1884, which includes the entire term of the presidency of Brigham Young and much of that of President John Taylor.

Throughout the book the authorities spoke with decisiveness on moral issues, and always in agreement. The language of the messages is straightforward and clear, dealing in a definite way with each situation. The reader readily detects wisdom, inspiration, and Revelation in these messages. As he reads the book through, he is amazed at the ability of the leaders to anticipate the needs of the people and the difficulties that would arise. Also, later history has verified that their suggestions to solutions to the problems were always correct. The agreement and unity of thought that prevails throughout the book is impressive. As the reader completes studying the book, he is thoroughly convinced that the authorities who wrote the messages were men who operated under divine inspiration, seen by the Saints to be prophets of God.

The reader receives a running narrative of the history of the Latter-day Saints in the Great Basin and throughout the world under two prophet-leaders—Brigham Young and John Taylor. He can follow the details of missionary work as it expanded into a world-wide system. He observes the methods used in an intelligent system of regulated emigration. He observes the expansion of colonization of the Great West under the superb leadership of President Brigham Young as he sent colonists in every direction from Salt Lake City and built an expansive empire. Also, the people’s civic, social, educational and religious lives were thoroughly pictured in the messages. The Saints throughout the world were kept abreast of the development of the Church in every phase of its activities through these messages.

The political and economic struggles between the Latter-day Saints and non-Church members are clearly depicted. During the Brigham Young period, the attempts at living the United Order in some of the communities are discussed, especially the development of economic cooperation and the purposes back of that cooperation.

President John Taylor’s period is marked by the persecution of the Saints, which came about through the federal laws passed against the Mormons’ practice of plural marriage. The instructions of the First Presidency, expressed as a result of the passage of the laws, instruct those who had entered into plural marriage regarding the course of action that they should follow during what has become known as the bitter “days of the underground.” Also, appearing toward the latter part of the book are several revelations received by President John Taylor.

Although there are a number of printer’s typographical errors in the book, the compiler has done quite a thorough job in collecting the available messages of the First Presidency of this period. However, the period of the “Utah War” contains the least messages of any comparable period. There are no messages between December 1856 and September 1860. 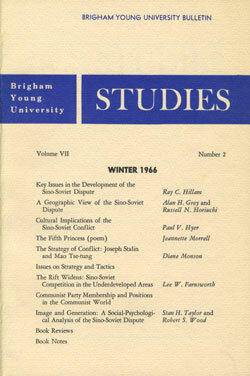 BYU Studies Quarterly 07:2
Next:
American Religions and the Rise of Mormonism