Money Matters in Your Marriage

The need for such a book as Money Matters in Your Marriage is evident when one reviews even briefly the importance of money matters in the family. Money is the number one cause of marital arguments, and some estimate that as high as 75 percent of divorces can be traced to financial problems.

This book represents an expansion and updating of a series of articles originally appearing in the Improvement Era. It is directed toward the Latter-day Saint family, particularly young married couples and young single people. Despite this, it has wide applicability to non-Latter-day Saint families who should find much useful information in it.

The fact that it is a compilation of articles published separately accounts for some of the strengths of the book as well as some possible weaknesses. The authors have achieved reasonable continuity from chapter to chapter and have achieved a very readable style with good transitions from one topic to another. There are, of course, some repetitions of ideas, usually in somewhat different contexts, however.

The division into many topic areas (24 chapters) in a relatively short book does make it possible for a user to review a particular topic after reading the whole book or to get useful information relative to a special area by reading one chapter.

The book contains many very practical suggestions for improving financial management through increasing ability to gain income, spending funds wisely, and providing protection for assets and earning power through insurance.

The dangers of debt and of loose methods of handling money are well portrayed, together with concrete suggestions for solutions.

One area which could have been given emphasis, in addition to the appropriate comments which are made in various chapters of the book, is the subject of income tax. This important money matter perhaps deserves a chapter. This chapter could point out the kinds of information needed in the record keeping of a family to provide tax data. It would cover such topics as contributions (including the recipient organizations), interest, taxes, medical expenses, union dues, data relative to the sale or exchange of property, and other items.

In Chapter 15 dealing with the subject of setting up a budget, the authors elected, as do many others, to begin with the take-home pay. For full comprehension of the income of the family, there are many advantages to beginning with gross pay and showing the compulsory deductions for income tax and FICA as part of the budgetary process. Gross pay really is the income of the family and the payments withheld and made in behalf of the employee by the employer are no less expenditures of the family than if they had been received and paid out by the employee.

Another topic that might be worthy of attention in such a book is the preparation for death, covering such topics as preparation of a will, preparing for estate and inheritance taxes, letters of instructions to survivors relative to assets owned and probable order of disposition and utilization. This topic perhaps was not covered because of the emphasis given in the book toward the young Latter-day Saint.

The authors have succeeded in producing a very readable, understandable book on a topic which some may avoid, feeling it will be dull and tedious. The book is very highly recommended, particularly to the young Latter-day Saint, but many others will find helpful, useful ideas which could easily save them many times the price of the book both in dollars and in peace of mind. 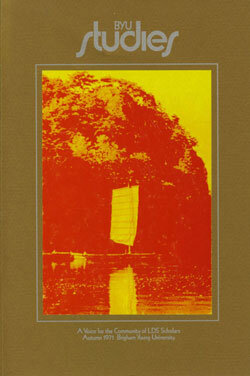 Previous:
The "Americanization" of Utah for Statehood