What helpful insights can the gospel offer to those concerned with the conduct of public affairs? This is a question many LDS people undoubtedly have wrestled with as they have tried to find political ground that is both practically defensible and morally responsible. In this small book, published by BYU’s David M. Kennedy Center for International Studies, a group of LDS scholars and foreign affairs practitioners have undertaken a collective exploration of ways the gospel can be made relevant in public policy discussions.

Exploring a subject with no easy or obvious gospel answers, the book contains edited papers and extended remarks presented at a symposium of the same title at the Kennedy Center in the fall of 1993. Moral principles have relevance to national security decisions, as in every area of public policy, but general principles usually leave room for disagreement as to the effectiveness and moral superiority of particular policies. Should the United States intervene militarily in Bosnia? Should Russia be admitted to the North Atlantic Treaty Organization? Should the United States destroy all of its stocks of nuclear weapons and rely on conventional weaponry for military security? Is any kind of U.S. military action short of defense against an actual armed attack on the country justified? Such questions typically raise a host of practical issues that tend to overshadow moral considerations, but when the moral issue is faced, what does the gospel tell us?

From time to time, General Authorities of the Church have made pronouncements on issues affecting national security. (A few of these are summarized by Steven A. Hildreth in a short chapter entitled “An LDS Moral Perspective on Security Policy.”) Church leaders have decried war, armaments, and reliance on the “arm of flesh” for secular security. Yet they have encouraged Church members to accept military service when called and have seldom publicly opposed any specific American military involvement abroad (121). Until the demise of the Soviet Union, anti-Communism was perhaps the most consistent foreign policy theme voiced by Church leaders. Also, Elder J. Reuben Clark Jr. opposed U.S. membership in the League of Nations and later regarded the United Nations as a threat to U.S. security and sovereignty.1 Elder Ezra Taft Benson likewise disapproved of the United Nations,2 although other Church leaders have treated the organization with greater respect. Such pronouncements are always heard with interest by Church members and sometimes the general public, but they rarely provide any comprehensive moral guidance for U.S. security policy. This stance is not surprising, since Church authorities in all prudence have ordinarily not desired to commit the Church to specific positions on particular questions of foreign and security policy.

The authors in this book, nevertheless, have ventured where General Authorities fear to tread. They can do so with good conscience, knowing that no one will hold the institutional Church accountable for anything they say. They also do so quite well. These committed Latter-day Saints are nearly all thoughtful academics, government officials experienced in the area of national security, or both. One author has since been called to the Second Quorum of Seventy.

This collection of papers comes at a time when the passing of the Cold War has made obsolete the former national security consensus, which was based on containing Communism by various deterrence strategies, and a new consensus is yet to emerge. Taking account of this changed situation, the papers are organized under three general topics: (1) U.S. national security objectives after the Cold War, (2) the emerging international security environment, and (3) the utility and morality of military options in the new environment. As a practical matter, most of the authors are not constrained by the topic assignment. They range over ends, means, the international environment, and the morality of it all—largely as their interests dictate. This is less a flaw in various papers and more an acknowledgment that the three topics are highly interrelated.

The most interesting aspect of the various pieces, certainly to members of the Church and probably to others who will read the book, is the attempt to find relevance for gospel principles. Others writing in the field of national security policy are as well qualified as these authors and have treated the subject in much greater depth, but this group is uniquely qualified to bring an LDS perspective to bear on such issues. For that reason, I appraised each article in terms of how well it achieved that purpose. By this test, three of the fifteen articles failed, yet even they had thoughtful comments on the political aspects of national security policy. Two of the three appear to have been informal remarks at the conference, perhaps later edited, rather than prepared papers.

Kerry M. Kartchner, one of the editors of the volume and an official with the U.S. Arms Control and Disarmament Agency, provides an introductory essay that achieves a nice balance between analysis of the changing national security agenda and the moral challenges posed by the altered circumstances. He identifies five key issues with deep moral ramifications: (1) What is the proper role of America in the post–Cold War world? Should we still strive for “primacy”? (2) Is secular “peace” attainable? Has peace been taken from the world for the duration of this dispensation? (3) How significant are internal security threats, including terrorism? Will the Lord fight our external battles if we can resist internal decay? (4) What is the moral responsibility of individual leaders for bloodshed and destruction in the world? Should we hold them personally accountable, and if so, how? (5) When is the use of military force abroad appropriate? Is military action ever morally justified or required? Kartchner raises questions rather than providing answers, undoubtedly the safe course when convincing answers are so elusive, but he places the discussion into a scriptural context that makes Church teachings appear genuinely relevant rather than merely parochial.

Valerie Hudson, coeditor and associate professor of political science at Brigham Young University, had the much tougher assignment of concluding and summarizing what was said at the conference. As might be expected, a fair amount of agreement emerged on a few general objectives of national security policy as well as many of the threats we need to guard against. Disagreement set in, however, on the specifics of what the United States should do to attain security and on the moral justifiability of particular policies. The emphasis again is on questions rather than answers, but Hudson manages to raise some very thoughtful and pointed issues. I was particularly impressed with her characterization of the dilemma faced by Mormons in government. “As an LDS national security professional,” she asks, “how do you keep one foot in the world and one foot in the gospel? When do you fall on your sword over principle, and when do you seek for credibility by telling your superiors what the wisdom of the world would advocate?” (177). Put in terms of salt with savour, she adds, “How do you figure out what is enough savour and what is too much for those worldly leaders with whom you associate?” (177). The same question, posed perhaps in slightly different forms, raises a moral challenge for all of us.

Between the introduction and conclusion, most of the intervening chapters offer useful and occasionally challenging insights. Two, in my opinion, stand out from the rest and alone make the book worth reading. Robert Wood’s keynote address, “Rendering unto Caesar: Moral Responsibility and Civic Duty in a World of States,” was superb. Any summary of this article will necessarily understate the symmetry and profundity of the whole, which joins a broad understanding of the history, theory, and practice of international affairs with an equally profound appreciation of scriptural concepts and ethical principles. Exploring the relationship between the “things which are Caesar’s” and “the things that are God’s,” as Professor Wood observes, requires both theological and political reasoning (54). The piece exhibits a high quality of both types of reasoning, along with a deep sensitivity to the moral question.

A second superior contribution is Paul Hammond’s “Security and Morality in a Contingent World,” which provides a compelling analysis of the complexity encountered by anyone, in or out of government, trying to decide which foreign policies are likely to be moral in their motivations and consequences. One especially telling comment addresses “the behavioral limits of the morally aware person responding to modern environments in which the mass media shrinks distances and demands attention to an agenda of morally significant things that need fixing” (143). Hammond continues,

Ignorance once kept our individual moral agendas short. Now they become long with our wider awareness of the world’s problems and the possibilities of collective action. To shorten and prioritize them is essential if we are to maintain any perspective on our collective capabilities in the face of evident needs. Yet shortening the list and prioritizing it can make us morally callous, if only as a defense mechanism against our sense of guilt. How can we justify saying no to starving children? Conversely, how can we get on with our lives if we always say yes to demands for our moral action? (143)

Unlike many of the contributors, Hammond offers specific suggestions for dealing with problems of moral choice in foreign policy. These suggestions are worth pondering.

Other contributions to the book are certainly also worth reading. Bruce Porter, a BYU political science professor at the time of the symposium, has authored a short piece that poses the broad moral and practical issues with understanding and common sense. Kerry Kartchner, dealing with an issue that will interest many, appraises the morality of maintaining nuclear armaments in the post–Cold War era.

This book is not the beginning of the moral dialogue about national security, nor will it be the final word. It is, however, unique as a collective effort of credentialed LDS scholars and experienced government officials to examine national security issues in the light of LDS teachings. It does not seek to indoctrinate. It has no hidden agenda. It expresses a wide range of views. All contributors, nevertheless, agree on one thing—that the moral dimension of national security policy is important. This book will be welcomed by others who share that view. 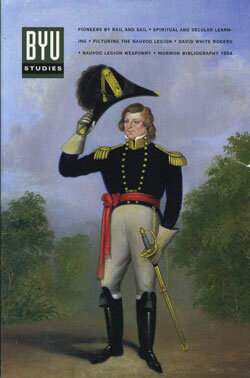 Previous:
The Angel and the Beehive