What Other Christians Can Learn from the Latter-day Saints

Debates on Mormonism’s status as a Christian religion generally revolve around dogmatic issues—what is, or what should be, Christianity’s minimum theological denominator, and does LDS doctrine fit within this particular requirement in order to be classified as Christian? For Stephen Webb, the author of Mormon Christianity and a former professor of philosophy and religion at Wabash College, that debate is settled: not only is Mormonism a legitimate branch of Christianity, but it is also a fountain of wisdom from which other Christians can draw, albeit critically. Indeed, Webb’s book is certainly one of the most flattering treatments of the Mormon faith to ever have been written by a scholar who is not a Latter-day Saint. It is also an excellent example of philosophical theology that will likely be appreciated by Mormons and non-Mormons alike for years to come.

Readers who are familiar with the author’s previous work in Mormon studies will not be surprised by the focus of this book. Indeed, Mormon Christianity further develops Webb’s February 2012 First Things essay “Mormonism Obsessed with Christ” and his 2012 Oxford monograph Jesus Christ, Eternal God: Heavenly Flesh and the Metaphysics of Matter, particularly its penultimate chapter entitled “Godbodied: The Matter of the Latter-day Saints.” The way in which these two publications are brought together and expanded is what gives Mormon Christianity its novelty. Webb takes the original, and perhaps questionable, approach of affirming Mormonism’s Christianity by highlighting one of its most distinctive characteristics vis-à-vis the classical theism of historical Christianity, namely the materialism of its metaphysics. This is what the author loves most about Mormonism. In fact, Mormon metaphysics is at the core of Webb’s claim that “other Christians can learn from the Latter-day Saints.”

To be sure, the book is more than a thoughtful treatment of Mormon metaphysics. While not a comprehensive introduction to the religion of the Latter-day Saints (a difficult task for any writer to achieve), the book addresses a wide variety of topics, including the Book of Mormon, temple ordinances, priesthood, Sunday worship, LDS history, plural marriage, prophetic authority, and the First Vision. Yet Webb’s passion for Mormon metaphysics is evident because the topic reemerges in every successive chapter with additional nuances, connections, and articulations. It lies at the center of the whole endeavor, as the author himself admits: “I think that Mormon metaphysics provides the best gateway into the whole range of Mormon religious beliefs and practices” (9). Indeed, it is in his treatment of metaphysics, both Mormon and not, that Webb demonstrates an impressive breadth and depth of knowledge that extends beyond classical and Hellenistic philosophy into modern scientific developments in the realms of physics and astronomy. His understanding of nineteenth-century Mormonism and of the writings of Joseph Smith, Brigham Young, and the Pratt brothers is also notable.

The book is divided into an introduction, seven chapters, and three appendices. Each chapter could stand on its own as an individual essay; indeed, the articulation of the book’s core argument is not strictly linear. In the context of what he calls “the Mormon Ecumenical Moment,” Webb begins by analyzing Mormonism’s “institutional identity” in relation to its Catholic and Protestant counterparts. Comparative analyses of this kind surface at various other points throughout the book, and Mormonism generally emerges from them in a very positive light. To illustrate, the author states that “Mormonism cultivates a sense of belonging, purpose, and focus that is not easy to find in many churches today” (11) and that “Mormonism has a deeply Catholic sensibility . . . [combining] elements of Protestantism and Catholicism in a way that is more than something that simply adds them together” (15). He emphasizes Mormon “elasticity” and “expansiveness” of doctrine, stating that “Mormonism is more elastic than those liberal churches that strictly enforce their unwavering commitment to progressive politics” (22), and that “Catholicism . . . needs Mormonism’s exuberantly unrestrained imagination” (76).

With philosophical erudition, historical awareness, and a good dose of wit, Webb defends Mormonism and its founder against derogatory accusations of being “magical” and “cultish.” Yet his primary defense is articulated through an enthusiastic embrace of the Mormon view of matter, which he classifies as a Christian form of materialism that lies between atheistic materialism and Platonic immaterialism. “Take away Plato from Christianity, and you will get . . . well, you will end up with something very much like the Mormon conception of the divine” (85)—such is Webb’s lament for the robust influence of Platonic philosophy over traditional Christianity. Indeed, the author sees the dominance of the immaterialist view as a contributor to modernity’s spiritual breakdown; he identifies in the severing of the supernatural from the natural “the single most important cultural revolution in the history of the world” (143–44). Conversely, for Mormons “nature is already thoroughly supernatural right down to the smallest atom, and the supernatural is nothing more than nature in its most intense and concentrated form.” Hence the whole point of Mormonism “is to affirm, celebrate, and seal the continuity between this world and the next” (148).

In addressing Mormon concepts of divine embodiment, gradation of matter, and “spiritual” materialism, Webb is not satisfied with simply highlighting the few doctrinal statements that exist on the subject. Instead, he turns to Orson Pratt “to find the true revolutionary potential of Smith’s metaphysics . . . [because] when it came to metaphysical speculation . . . Smith was the forerunner and Pratt was the real thing” (89–90). This is indeed one of the most interesting and dense sections of the book, exploring such topics as the nature of the Holy Spirit, intelligence, the idea of a world’s soul, and time-space dimensions. The author then surveys a few historical and theological aspects of Mormonism (with ample connections to metaphysics) before concluding with two questions, addressed to mainstream Christians and to Mormons, respectively. In asking Christians what they could learn from the Mormons, Webb detours somewhat into a critique of Calvinism, which he identifies as the main historical and theological opponent of Mormonism. The question for Mormons is different since it is focused on the future direction of the faith: will Mormonism be more metaphysical or evangelical? The author identifies David Paulsen as the best representative of the former direction and Robert Millet as the key exponent of the latter. Together, Webb concludes, “Paulsen and Millet make Mormonism look like a creedless Catholicism joined to a nonliteralist Protestantism” (169).

In the final analysis, Mormon Christianity is a fascinating book that is both intellectually stimulating and pragmatically relevant to the realm of interfaith dialogue. Its strengths include the author’s openness and appreciation of a doctrinal stance that lies outside his own religious tradition; his philosophical acuity, clarity, and breadth when dealing with Mormon metaphysics; and his capacity to demonstrate the centrality of Mormon materialism within the broader framework of the Mormon doctrinal worldview. As a Mormon reader, I certainly obtained a renewed appreciation of the Christian materialism inherent in my own tradition. The book was also enjoyable in its personal autobiographical touch; I found that the author’s description of his own religious journey from Evangelicalism through the Disciples of Christ to Catholicism helped me to better comprehend his complex theological background and his unprejudiced approach to Mormonism.

At the same time, the book has some shortcomings that should not be overlooked. Weaknesses arise from the exaggeration of those elements that constitute its strengths. For example, Webb’s sympathetic view of Mormonism at times borders on the romantic, such as when he states that Mormons “do not manifest any trace of the religious guilt and self-reproach that are still inculcated in many traditional Christian churches. They seem too happy to be Christian!” (44). Moreover, his almost exclusive focus on Mormon metaphysics as the defining tenet of its Christianity risks obscuring the more multifaceted, complex, and paradoxical richness of the LDS faith. Perhaps, for a book entitled Mormon Christianity, the focus is too narrow. It follows that its ecumenical effectiveness can also be brought into question: readers may not as readily recognize Mormonism’s Christianity, as Webb does, from the primary focus on its distinctive metaphysics. Finally, the author’s critique of Calvinism in the latter section of the book appears to be a bit harsh and somewhat out of tune when compared to the conciliatory tone of the rest of the volume. These questionable elements aside, Mormon Christianity is a remarkable work of philosophical theology and a fresh, welcomed interpretation of the LDS faith and of its metaphysics, which will be well worth its readers’ time.

Mauro Properzi received his master of theological studies from Harvard Divinity School, an M.Phil in psychology and religion from Cambridge University, a PhD in Mormon studies from Durham University in the U.K., and a postdoctoral certificate in interfaith dialogue from the Pontifical Gregorian University in Rome, Italy. Since 2011, he has been employed full time at Brigham Young University, where he teaches classes on world religions and Christianity. His main research interests include LDS-Catholic dialogue, the theology of religions, moral theology and ethics, and Mormon Studies. He has published in the Journal of Ecumenical Studies, the Journal of Mormon History, BYU Studies Quarterly, and in Issues in Religion and Psychotherapy. Properzi is a native of Gorizia, Italy. 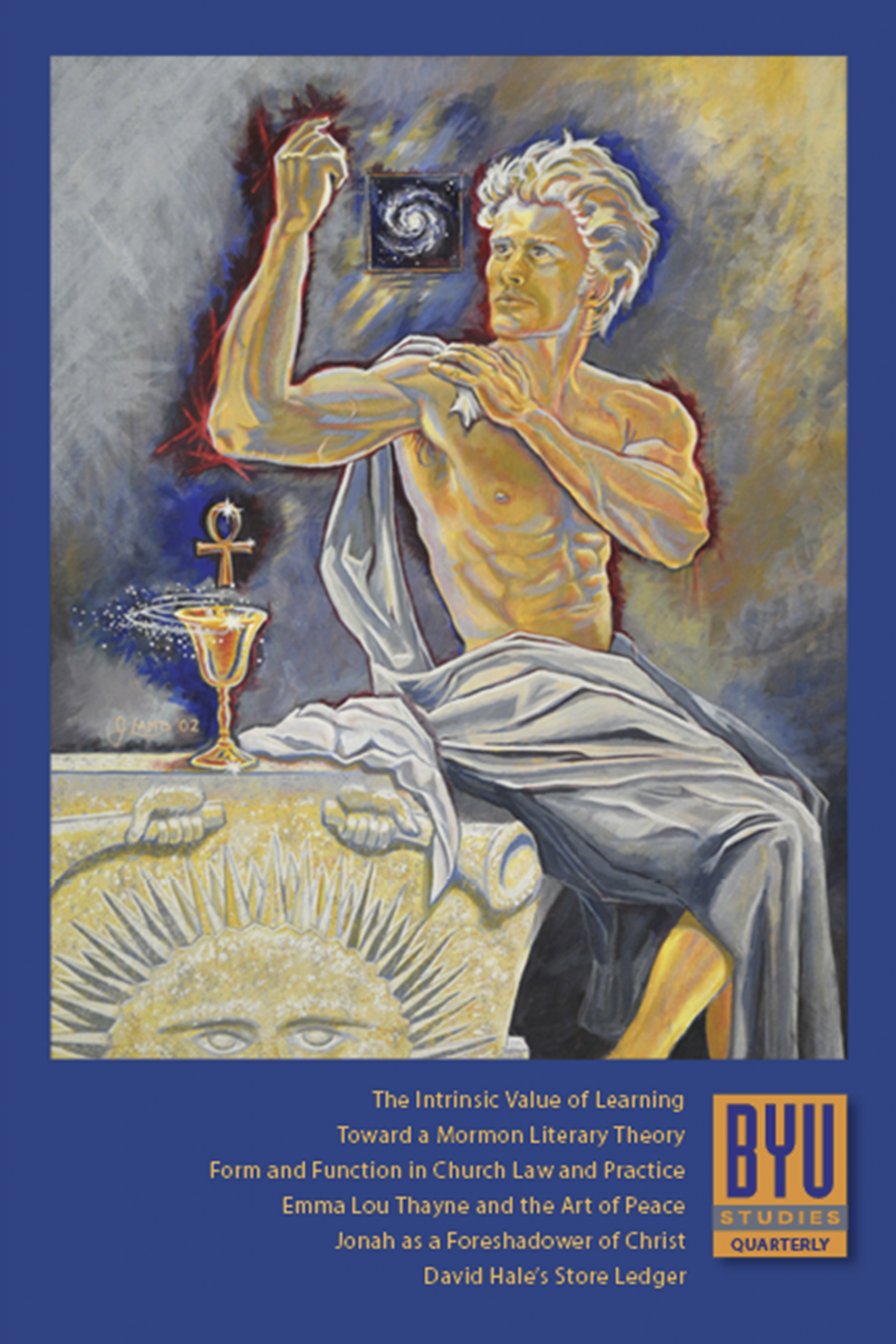 Previous:
Let Me Be Sad