Mormon Midwife: The 1846–1888 Diaries of Patty Bartlett Sessions, the second volume in the Life Writings of Frontier Women series, is a fitting memorial for one of early Mormonism’s remarkable women. This volume is also a monument to its editor, Donna Toland Smart, and the seven-year task of bringing Patty Sessions’s life to light through her own words. Under the general editorship of Maureen Ursenbach Beecher, each volume in the Life Writings series is assigned its own editor. Donna Smart has meticulously transformed Patty Sessions’s worn and faded diaries, whose pages are covered to the margins with almost illegible handwriting, into an organized, readable text, amply footnoted.

The first of the seven diaries begins as Patty Sessions leaves Nauvoo with the February exodus in 1846, and the last ends abruptly in May 1888, four years before her death. There are some gaps. The sixth diary covers the years 1862 to 1866, followed by only a few entries for 1880. The last diary (1884–88) includes a retrospective chronology and financial record and increasingly briefer and more repetitious entries, reflecting her waning years. A brief account book, a listing of all of her children’s families, and the minutes from a straw-braiding school she conducted in 1868 and 1869 make up the three appendices that follow the diaries.

An informative preface describes the diaries, explains the steps taken for accuracy, and indicates the editorial methods utilized to make the diaries as explicit as possible. Of particular value to the reader is the editor’s introduction, which provides the familial and historical matrix in which the diaries were written as well as an overview of Patty Sessions’s long life. It also includes the editor’s appraisal of the contribution of this woman’s life, not only to her family and the Mormon community, but also to the history of Mormonism and particularly that of LDS women.

As a midwife, Patty entered the lives of people at their most vulnerable points and sensed, perhaps more than many leaders, the pulse of the community. This might well explain her compulsion to note the names of everyone whose life touched hers. As a result, a major contribution of this volume to Mormon history is the identification of the hundreds of names that pepper nearly every sentence of this Mormon midwife’s daily history. That meant giving identity to the multitude of babies she delivered, as well as their parents, along with their relationship either to Patty or to her friends. This herculean editorial task also included identifying friends, family members, and anyone else Patty encountered as she worked her way through the multiple activities that made up her daily life.

Since she was an early convert to Mormonism, an activist from their inception in its several female institutions—both formal and informal—a pioneer as well as officer and leader in the medical and agricultural enterprises in Utah, a strong supporter of education, and a consistent contributor to the temple and emigration funds, it is apparent that this woman dealt on a first-name basis with the major Mormon community. And that’s just the problem: Patty used mostly first names or initials, adding only the maiden rather than the married names of women who (like herself) were plural wives. The reader is staggered by Donna Smart’s scholarship and research in ferreting out all these people.

Patty Sessions was also an astute business woman and careful accountant. As assiduously as she recorded the names of people, she also noted her financial transactions, which included money earned, spent, donated, lent, and saved. She had absorbed the intense commitment to industry learned in childhood and made her adult labors productive and profitable. From her industry and frugality, she was able to give extensively to various Church programs, to the poor, and to her family. On several occasions, she gave substantial sums of money to Brigham Young to use “unless or until I have need of it.” She never did.

The diaries reveal Patty Sessions’s life as both a private and public figure. Her private life is saga enough, from her birth in Maine in 1795, her marriage to David Sessions, and the loss of five of her eight children, to her conversion to Mormonism in 1834, the move to Far West via Kirtland in 1837, the traumatic expulsion from Missouri and resettling in Nauvoo, and her marriage to Joseph Smith. All of these events take place before the diaries begin, scrabbled together from a series on her life published in the Woman’s Exponent and other published sources along with excerpts from her son Perregrine’s diary.

Then, on the day she leaves Nauvoo, the diaries commence, and a terse recital of events informs the reader of her difficult parting with her married daughter, Sylvia, and son David, left behind in Nauvoo; the impeding mud of Iowa; the respite in Winter Quarters with all the births and frequent deaths of the babes and mothers she attends; the spiritual outpourings in that temporary outpost; her departure in the second emigrant company of 1847 with her husband and son Perrigrine; the hardships and humors of the trail; the scrounging to start life anew in the desert; the blessing meetings that continue with her sister Saints and sister wives; the tearful reunion with Sylvia and David after a seven-year separation; the death of her husband, David, and her subsequent marriage to John Parry; the complications of plural marriage for herself, her sons, and daughter; the self-reliant building of her own home, orchards, and buildings, first in Salt Lake City and again in Bountiful; and the births, illnesses, and deaths throughout. All are stated with matter-of-fact objectivity.

Only occasionally does emotion color her bare-boned narrative. “When I think that Sylvia and David and Josephine (Sylvia’s child) is not coming,” she wrote when informed of their decision to remain in Nauvoo, “tears fall from my eyes as fast as the drops of rain from the skies for I can now give vent to my feelings by weeping Oh Lord Comfort my poor wounded heart” (52).

Sometimes her laconic style can bring a smile to the modern reader. Returning to her tent from a hard ride through the thick Iowa mud after hours spent delivering a baby, she found “Mr. Sessions a bed without his supper no one to get it for him” (37).

A breathless quality often emerges from her laundry-list recital of her activities, ranging from the mundane chores to the spiritual services of her day. A week in August 1855 began with her attending a patient on Monday. She then recounts the days that followed:

Tuesd 14 went in the morning as I have to wash and siringe her out many times a day I then came home took sister Nancy Hickenbottom through a course of medicine after noon went and aprised sister Higbee and Tate things to put into the church then went staid all night with Harriet wend 15 came home Nancy went away I went to the benevolent society then staid all night with Harriet came home got bread went again staid all night made risen baked bread Frid 17 ironed churned took care of her and children came home staid all night then Sat 18 morning went anointed sister Higbee laid hands on her felt quite sick myself then went to see Harriet staid till 9 A M then came lhome sick was sick all day could not go to the counsel of health Mr. Parry came administered to me I got better he wanted me to go down said the babe was very sick he went back came after me at 3 A M sund 19 again said it was dying I went he wished me to anoint and lay hands on it I did again it stoped crying but it breathed very hard at 3 P M he wished me lay hands on it again said he was to sick himself I did it went to sleep slept the most of the time untill 5 AM Monday 20 it breathed its last we buried in the evening I came home staid all night Mr. Pary staid with me. (219)

If her pioneer midwifery practice were not sufficient public service, Patty showed what “building the kingdom” entailed on a personal level. She contributed money to Church projects, served in the women’s organizations, built and endowed a school, supported home industries, joined the Retrenchment Society, and transmitted her medical knowledge through the Council of Health and informal training. Her knowledge, skills, time, and energy were devoted to the kingdom and to those who were building it with her.

As matriarch and counselor to her large progeny, faith healer, and temple ordinance worker for her sex, Patty Sessions finished her days. The reader is left quite overwhelmed with this woman’s capacity for work. Until the infirmities of age crept in, she built and maintained her homes, planted, harvested, dried, preserved, and sold her considerable annual fruit crop of peaches, plums, and apples with comparatively little help. And she sewed! Dresses, caps, quilts, and finally rugs. She wove them from rags and taught others that skill. Most of the entries in the final diary are brief, unadorned statements of her life-long sewing tasks:

Tuesday 8 commenced a rug wenesday 9 worked on it Thursday 10 worked on it I have Friday 11 I have finished my rug and knit a good deal & done many other things have rode out almost every day besides. (392)

Written in November 1887, these entries reveal a ninety-three-year-old woman still at work! The last entry, written a year later, reads, “I have knit & the most of the time three pair of stockins this week it is now friday the 4th” (394).

One of the illustrations in the book shows an elderly Patty sitting before a simple fireplace, a cap on her head and lace collar about her neck, probably both of her own making, and the ubiquitous knitting needles in her strong-boned, well-worn hands. Perhaps if anything could symbolize the life of this remarkable woman, besides her own written testament, it would be that image of her strong, productive, caring hands.

This is not a book for casual reading, but persistence is well rewarded. Seven years is a long time to spend on a project, but readers will be grateful to the conscientious editor who has so carefully, effectively, and lovingly brought Patty Bartlett Sessions to life. The book is a valued contribution to the Life Writings of Frontier Women. 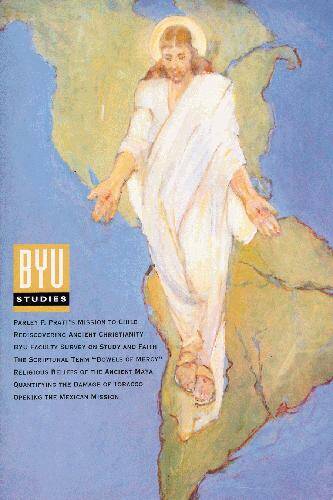 BYU Studies Quarterly 38:4
Next:
The History of Louisa Barnes Pratt