Life in the Principle

As the hundredth anniversary of the Woodruff Manifesto approaches, books and articles have proliferated on the topic of Mormon polygamy. Fortunately, enough time has passed that some degree of objectivity holds sway in current presentations. The time for polemics or apologetics is past. There is only a need to understand and distill present meaning out of past circumstance.

Embry has brought together a plethora of information on many aspects of polygamy untouched by previous inquiries. In a straightforward and scholarly manner, she deals with the intricacies of household economy, social activity, church activity, and other aspects of the diurnal life in the principle. She compares polygamous life with life in monogamous families. Her somewhat surprising conclusion is: life inside the principle was not much different from life outside the principle.

Though I can agree with this conclusion on many points, I must contest it on a few. I agree that the underlying mores of the era controlled the conduct of both those within and without polygamy. But I continue to believe that polygamy fundamentally changed the lifestyle of many women who lived it.

First, though, I must admit to a bias. Polygamy was a factor in a number of my own ancestral lines and, in the cases I have studied, the practice was trying for the women to the point of being starkly tragic. My ancestors were in most cases second wives. Two lived on farms and essentially raised their families as married widows. In another case, marriages between four women and one man ended in two divorces, an estrangement, and a relatively unhappy family life. My sample is of course much smaller than Embry’s. Still, I tend to think that polygamy required lifestyles frequently at variance from that in monogamy.

Let me review one of Embry’s points that I contest. Embry discusses one aspect of polygamous lifestyle, the female economic role, on pages 94–98 of the book. She states that 12 percent of polygamous wives received no support or minimal support from their husbands. She found a similar percentage of monogamous women who received no support, but this was because they were widows. I contend these statistics do not adequately differentiate between the quality of husband support rendered to polygamous wives and that rendered to monogamous wives. To me the evidence does not yet contradict the “stereotype” that many polygamous wives developed independence of necessity and bore more financial responsibility than their monogamous counterparts.

A second point at which I vary from Embry is the significance she gives to the social and ecclesiastical pressures placed on both men and women to live the principle. What Embry tamely calls “encouragement” to enter polygamy (62) was much more than that. I think we have little comprehension of the fervent sacrament meeting orations that made many think polygamy was mandatory to reach celestial glory. Nor do I think we appreciate how social expectations swayed impressionable young girls into unions with married men many years senior in age. Obedience to authority was quite as powerful as adherence to religious principle for those who entered the principle. Embry deals with these issues, but I would rate them as more significant than her portrayal suggests.

The book has many strengths. It is objective and does not make assertions for which it provides no evidence. It far surpasses the scholarship of Kimball Young’s book Isn’t One Wife Enough?—its only legitimate antecedent. It summarizes a great mass of data otherwise available only in rambling oral histories, bringing us numerous insights into the daily reality of polygamy. It is the most comprehensive and best work available on polygamy beyond the veil of stereotype.

Unfortunately it shares a weakness of other works on the topic—the problem of documentation. Polygamy was lived out mostly behind closed doors and unseen inside human souls. The documentation in most cases simply was never created.
There is another major problem with the sources beyond the fact that they are so sparse. The sources for this book consist primarily of interviews of polygamists conducted in the 1930s by a sociologist with a clear bias against the practice, and interviews conducted in the 1970s and 1980s with children of polygamists. The first group’s interviews may well have been tinged by the bias of the interviewer, and the recollections of the latter group are far removed from the events they recount. At best, the sources give a partial glimpse of polygamy after 1880, with heaviest emphasis on marriages contracted after the Manifesto, when circumstances surrounding the practice were much different from earlier periods.

Embry is aware of these problems, but her admission of its reality is relegated to a chapter on demographics, rather than being given its due prominence in her introduction. The result is that this study is really more of a distant reflection rather than a clear close-up of polygamous life throughout the period of its practice.

With regard to composition, I felt that chapter 2 was the best précis I have read on the history of polygamy. I was not so pleased by some of the other chapters. As I moved into the chapters analyzing each element of family life I began to get lost in the details and cast of characters. This occurred particularly when I kept running into paragraphs without topic sentences and had to backtrack to remember what I was reading about. Also, I would occasionally stumble on sentences that did not quite convey what was intended, such as this one from the beginning of chapter 3: “Mormon polygamy raises a lot of questions about demography,” rather than something like, “Demography reveals a lot about the nature of Mormon polygamy.” The result is that the casual reader might get bogged down before reaching the concluding chapters.

Nevertheless, this is an important work on an important topic. Basically positive in its approach, it provides a balance to the negative sensationalism of polygamy’s detractors and uncritical wishfulness of its proponents. Polygamy was one of the greatest single factors that made Mormonism what it was in the nineteenth century. If it is lost from our consciousness, we give up much of that heritage. Embry’s work gives us a chance to reflect again on a legacy we ought not forget. 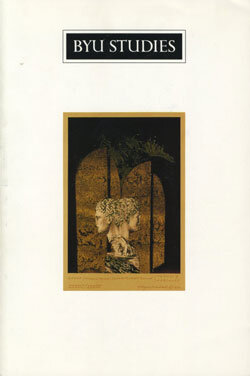 Next:
An Abundant Life